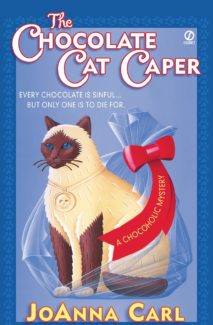 Infamous defense attorney Clementine Ripley is throwing an opulent party in her strange, minimalist mansion in the small Michigan town of Warner Pier. In preparation for the upper echelon only celebration, she’s contacted TenHuis Chocolade with a $2,000 plus order of fancy chocolates, including a few specialized feline shaped goodies to celebrate her expensive prized feline, Champion Yonkers. Aunt Nettie, the owner of TenHuis, can’t say no to the money, but she also cannot bear to set-foot in her enemy’s mansion. Enter new divorcee Lee McKinney, who has just returned home and is helping Aunt Nettie run the family business. Lee isn’t involved in the turmoil and is the ideal candidate to make the delivery, collect the money, and get out . . . only, Lee gets more involved than anyone could have ever imagined when Ripley makes a swan dive off her interior balcony after eating a poisoned chocolate.

Everyone in town, from the sheriff to Ripley’s recently returned ex, Joe Woodyard, had a reason to see the attorney meet a violent end, but Lee and Aunt Nettie are the only real suspects, and all evidence points to the chocolates as the culprit. Determined to save herself and Aunt Nettie, Lee has only one option: find the killer before he (or she) completely frames them.

The first in the Chocoholic series, The Chocolate Cat Caper establishes our main characters while delivering some absolutely luscious, tempting chocolate related goodness. I seriously wanted to go out and buy every chocolate available (be careful, Amazon has Godiva chocolates and my “buy now” hand is trembling with desire). In among the custom, high-end chocolate descriptions (pure heaven and also pure torture for those of us who have tried to temper pandemic eating with a diet), the cozy moves along as the characters and their eccentricities are introduced. It’s not, however, the best moment for the series (I, fortunately, did not start with book one), and there are moments of imperfection as the author establishes the set-up. 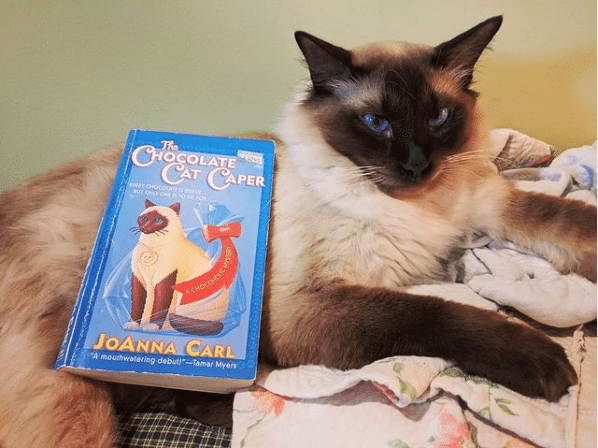 My cat, Ziggy, posing with the book. He was not amused…

The Chocolate Cat Caper is mostly predictable (unlike later offerings) and we suspect early on who the killer is, although the full why is only slowly revealed and makes for a more complete, in-depth surprise. Lee and Joe’s relationship is established, going from antagonism to a second-chance romance fairly quickly and without much of a transition. Some character aspects are way overdone – a smarmy Texan with lines that are so sugary they hurt your teeth, Lee’s irritating habit of mixing up words, a mystery that is less explored and more just delivered to the perplexed heroes who are mostly inert.

The set-up is a little rapid and a little messy and the characters haven’t quite found themselves and their niche yet, but the promise and potential is strong in among the world building. And, despite the imperfection, it’s still an enjoyable read and at no part do readers wish to throw the book aside. The intrigue mounts as more suspects are introduced into the fray and while Lee is puzzled about how to get started, the killer isn’t losing any time planting fake evidence that points straight to Aunt Nettie. We’re in from the beginning and we stay there.

Champion Yonkers, the kitty who inspires the cover chocolate, is a cute addition to the story, although I didn’t care for his potential danger and Lee’s idea to use him as a weapon/distraction during the inevitable amateur detective confrontation with the killer that ends every single cozy. The ending of The Chocolate Cat Caper is, as mentioned, a little rough and a little predictable, but it still has an edge, shadowing the potential of the series (a potential that I am here to say it more than lives up to).  The world of Warner Pier is not all the way developed yet, but it’s beginning to take shape, and this adventure is a fun start-up to a series that, by book two, will be a lot more comfortable with itself and more than ready to go from average to imaginative and addicting.