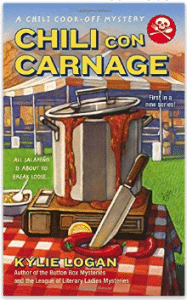 Summer is heating up, as is the competition. Feisty and festive in her giant Chili Chick costume (with the stilettos and fishnets), Maxie Pierce is giving attitude to the limit while her half-sister, Sylvia, runs their missing father’s famous chili booth. While Texas Jack may not be around now, both sisters maintain hope that someday he will return from his latest criminal scheme (if he’s not dead) and do what he does best: chili cook-offs and bad romances – key Lady Gaga song here).

If life isn’t complicated enough between the brunt of business and vicious sibling rivalry, Maxie’s latest conquest, the dubious Roberto, is prepared for a flame-down, voices up public breakup with the chili clad Maxie. Later, when his lifeless body tumbles onto Maxie after she inadvertently dumps some of Texas Jack’s finest on the suit of famous master chef and cook-off personage Carter Donnelly, it looks like murder is the missing catalyst that makes everything boil over. When the responsible, nagging Sylvia is lead away in handcuffs, the plot thickens and Maxie is confronted with the true meaning of family, or you know, half family at least.

Another random find, this time at an independent bookstore in Apalachicola, I keyed into Chili Con Carnage for its obvious cozy merits, not to mention its colorful spine and kitschy title. It was an impulse buy, a pig-in-a-poke, and an introduction to the semi-prolific Kylie Logan. More importantly, it was a book, and even during vacation (or maybe especially because of vacation) the fever to shop for readables was upon me.

The story starts off with dubious sass, a certain in your face squalidness reminiscent of a bad comedy. The heroine, Maxie, comes across as an unlikable shrew. Ok, when I say unlikable, I really mean despicable. She loathes her half-sister for an especially peculiar reason that goes beyond sibling rivalry: Maxie’s philandereous father, Jack, left Sylvia’s mother because he was cheating on her with the woman who later became Maxie’s mother. Of course, he moved on, leaving Maxie’s mother grateful for the brief encounter with such a man and her daughter, twenty plus years later, oddly proud because of her father’s ummmmm, prowess? Only Sylvia and her mother feel pained and rejected, leaving Maxie to hate them for their lack of praise for the absentee Jack. Just, what? I’m not even going to explain how simply strange this is as a reason for rivalry and how distancing since readers are expected to be right in there with Maxie in the Jack-is-so-awesome club.

The familial hatred takes up a good fifty pages (possibly more, I’ve been sort of reading at this since September) meaning that many readers will feel like ditching long before the murder and the mystery get going. I know this from my own feelings and also from a penchant to read reviews of books after I have completed them. Being prone to a strange emotion of failure if I don’t finish a book, I kept plowing ahead, and thankfully, the narrative did improve.

Maxie’s abrasive personality tones down later, and the murder of her date, Roberto, adds some spice to the tale. Indeed, the mystery itself is fairly well structured (for a cozy, I mean, there’s no Perry Mason brilliance going on here, but you don’t expect that in a book with a title like Chili Con Carnage now do you?) Maxie does actually investigate and this allows readers to meet an entire host of characters from her pseudo love-hate potential romantic interest ex-cop detective friend (wow, take a breath after saying all that), to Puff the local bean seller and pot smoker, to Roberto’s trail of thwarted females. Despite better judgement and knowledge that the story is just ok – adequate to fix a bookworm’s junkie like drive for something to read but nothing that compels on its own – I was marginally interested and stopped thinking about “accidentally” putting the book down and forgetting to pick it back up.

Chili Con Carnage reminds me quite a bit of a cozy that I read earlier this year, Flamingo Fatale which is the first novel in the Trailer Park Mystery Series. The writing and the atmosphere are trying for a certain deliberate stereotype and you can read between the lines that the author is thinking “this is what those people are like, aren’t I brilliant?” I’m not sure if the writing and the general presentation of the characters in their world is meant to be funny (obviously, there is some deliberate jocularity here) or if it’s just a formula. Either way, it’s not insulting (well, excessively anyway) but it’s hardly viable either. We know it’s a book, a story, the entire time we are reading and that it’s tailored to deliver a certain set of feels, which defeats the entire magic-carpet-ride-of-cozy-mystery reading. I mean, really, it’s not cozy unless you have a yen for trailers, chili, and exceptionally messed up families.

It tries. It tries very hard. Indeed, too hard overall. But hey, I was entertained enough to finish and to speculate on the murderer. The novel didn’t call me back like a siren song, but after wading through the first fifty pages it didn’t make me want to run away pulling out hunks of hair. Chili Con Carnage is very tailored towards a sassy, trailer-parky comedy style and readers who find this atmosphere amusing and enjoyable will no doubt relish the tale. I wasn’t one of those readers, but I didn’t hate the experience of reading this book. I enjoyed aspects, found that the mystery and the investigation was fairly well done for a cozy, and think that the author shows potential. Ultimately, it’s just not my style of cozy mystery.