Chef Maurice and the Bunny-Boiler Bake Off 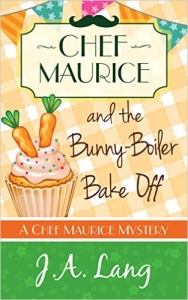 Deadly Secrets are Stewing in Beakley

The birds are chirping, the sun is shining, Hamilton the micro-pig is finding life full of outdoor enjoyment . . . and Chef Maurice is hopping around dressed as a giant, fluffy tailed rabbit. This can only mean one thing – murder has come to the quiet Cotswold bliss of Beakley. At the yearly fayre and traditional bake off, more than just blow-touched smartie cakes are cooking; broiling just beneath the placid surface is a recipe for long-awaited revenge.

When stiletto strutting celebrity chef Miranda Matthews takes Chef Maurice’s acclaimed spot at the Beakley Bake Off judging panel, tensions are high and our lively chef is anything but happy. This interloper with her store bought cakes and questionable blowtorching techniques may be a television star, but she is hardly a chef. Meanwhile, more trouble is brewing in Chef Maurice’s kitchen when Patrick contemplates leaving for a new opportunity and lovelorn P.C. Lucy’s passive aggressive strategy to retain her beau in Beakley continues to backfire. With thwarted romance and bake off stealing celebrities, spring has sprung with a vengeance and the kitchen is in chaos.

When the fayer does arrive, P.C. Lucy is entangled in a desperate scheme to gain the approval of Patrick’s mother (by entering an entirely disastrous cake in the bake off), the mayor and his sexy secretary are decked out in full bunny costume for some re-election gimmicks, and poor Arthur is on a diet. Still, the festivities of the day and all the lovely food are compelling reasons to see the best in everything – that is until Miranda Matthews is found after wondering off set, bludgeoned to death, a fluffy fake bunny tail caught in a nearby bush. Unwilling to allow the deliberate demise of a chef (regardless of the deceased’s negligible culinary skills) Chef Maurice and co-horts are hot on the trail of another killer before more illustrious foodies are targeted.

Sauntering between the breezily flamboyant, the decadently absurd, the lovably cozy, and the intriguingly mysterious, Chef Maurice and the Bunny-Boiler Bake Off combines first-class British comedy with an M.C. Beaton like aura. It proves, shall I say, delicious. On his third adventure, Maurice and his querulous kitchen are caught between killers and karma as co-chef Patrick contemplates choosing a higher road to culinary advancement. Between the daily activities and the drama of murder, the peppy little tale hops along, a sprightly step of spring lightening the lamentable finding of, you know, a body. It’s all fun and games – even after someone gets hurt!

The Chef Maurice tales have a certain irresistible verve and this is namely in characterization, which stays strong in this third offering. The mystery is solid, but the magic is in Maurice’s feisty, zesty French-ness. His shouts of “Exactement!” and his sturdy mustache keep this bouncy, rotund figure in the forefront. Not one for the traditional cozy-mystery style of sleuthing on the sly, Maurice keeps everything lively by being as annoying as possible, butting into the investigation at all stages and usually during the most inconvenient and horrifically public moments. It’s hard to determine if the bubbly little chef is a help or a hindrance but one thing is for certain: his effusiveness makes him astonishingly believable, despite all the exaggerated comedic elements. Readers love Maurice especially because he can keep us simultaneously laughing and investigating, imbuing a certain cheerfulness and an addicting vitality to even the gloomiest murder.

The supporting cast is as strong as ever and while not on the same level of legend as the inimitable Chef, they are all so very real. Within Chef Maurice and the Bunny-Boiler Bake Off Patrick and Lucy take center-stage as their on-again off-again fumblings at romance track steadily, a side-plot loaded with potential for heartbreak and hijinks.

The only little quibble is about Hamilton, the delightful micro-pig who was so essential to the first Chef Maurice drama. Hamilton gets one very memorable scene here, watching the Chef determine how a bunny suit could so easily lose a tail, and as usual we are delighted with this quirky pig’s peaceable personality. But then, sadly, Hamilton disappears from the story and ardent followers of his adventures wish that Bunny-Boiler could have made a little more page space for micro pigs in general and Hamilton in particular.

Despite lots of hilarity, the mystery remains hard to unravel and the conclusion, delivered grand Chef Maurice style (those of you who have read the previous two books know to which setup I am alluding) is a complete surprise. Despite following along with the clues and the possibilities, the killer was unveiled as the one person I had not so much as suspected, leading for a quite delightful punch line, some commentary that might affect Patrick and Lucy (at a future date), and a memorable grand finale.

Light-hearted, full of warmth and humor, yet entangled with penetrating mystery and addicting investigation, Chef Maurice and the Bunny-Boiler Bake Off is one cozy mystery that needs to be on your shelves this spring. Highly recommended.