Chef Maurice and a Spot of Truffle 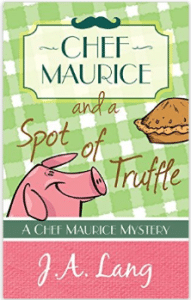 An Endearing and Hilarious Cotswold Cozy!

When Ollie Meadows, disliked supplier and forager for the local gourmands and restaurants, misses his weekly delivery, Chef Maurice, eccentric gastronome and restaurateur, decides to take measures into his own pudgy hands. However, when he breaks into Ollie’s house to grab his groceries, a sudden discovery of some mysterious English truffles leads the chef to wonder just what Ollie is into. Not one to miss a good chance, or a good meal, Maurice tries to pilfer some of the gourmet delights only to be stopped by the police force. Sure that the truffles are locally grown and hidden somewhere in the English woods, Maurice and his Aston Martin driving friend, Arthur, strike into the woods. But first, to pick up a truffle dog or, as the case may be, a micro-pig. But the truffle business is about to take a dive when the pig unearths more than truffles. With a dead body in the woods, it’s obvious that the stakes of a well catered meal have just gone up. Can Maurice find the killer and the truffles before the gourmet business takes a dive?

A charming combination of British comedy, Cotswold cozies, and alluring mystery, Chef Maurice and a Spot of Truffle proves just as charming as its pig bedecked cover. Reminding me of Lenny Henry’s hilarious brit-com Chef!, the narrative delights us with both sardonic and absurdist wit. It’s simply hilarious, especially the segments detailed through Hamilton’s (the micro-pig) perspective. Chef Maurice and his continual dining (even during stake outs or while foraging through a murder suspect’s home) keep the cheer high and the pacing fast. While the investigation festers like a moldering truffle weighing down the community, the antics of the characters keep readers engaged and charmed. When the mystery thrusts its full weight, we’re already wedded to the characters and the sense of place, so the book appeals on both levels.

The tongue-and-cheek nature of the story intertwines well with the cozy, happy aura of the English Cotswolds. The atmosphere is decadent, and the fall weather and crunchy leaves makes for a nice seasonal transition. Hamilton in his little rain boots and Chef Maurice’s dedication to his truffle comrade amplify the cozy as does the serpentine nature of the mystery.

The mystery itself really takes a backstage to the characters including the over-taxed police officer, Lucy Stone, who gets herself embroiled in some mushrooming trouble, shall we say. It’s just as a cozy mystery should be, with the weight on the playful nature of the language and emotions of the cast. This world, well peopled and described, does, however, provide an engaging mystery. Who did kill the obviously womanizing and generally disliked Ollie Meadows? Where are those impossible English truffles? Was Ollie killed by a scorned lover, an angry husband, or another forager? And what of Ollie’s dog who mysteriously disappeared? When a pignapping takes place, the timeline cranks down and Maurice is left to solve the mystery quickly if he ever wants to walk his micro-pig in the woods again. All of this leads to a big, very public revelation and a slap-up meal of the very best kind. Maurice, outspoken, laughable, and ultimately lovable gets to have his moment of fame. . . and maybe even some truffles!

Addicting in the extreme, providing many good nights of cozy cuddling under the sheets to indulge myself with more moments of these delectably goofy characters, Chef Maurice and a Spot of Truffle is a definitive winner. I plan on returning to this series for further visits with the chef and his enchanting micro-pig!