The war on sanity… 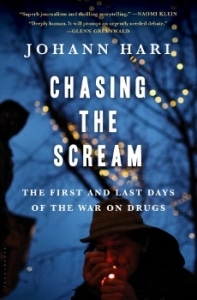 Anyone paying attention is likely to recognize that the modern “war on drugs” has been an unmitigated failure. As it was with the prohibition of alcohol in the 1920s, people still find a way to get the drugs they desire. Moreover, the fact that popular drugs like marijuana, heroin, cocaine and methamphetamine are illegal leads to all sorts of worrisome direct and indirect consequences that only create additional problems. Like me, you may think you’ve heard all the reasons why drugs should be legalized. But until I read Chasing the Scream, I had no idea in how many ways the modern version of prohibition is responsible for many of society’s ills.

Motivated by his own personal concerns about addiction, award-winning British journalist Johann Hari set out to explore the world of recreational drug use and humanity’s seeming infatuation with mind altering drugs. While he started his quest from a generally pro-legalization viewpoint, he was still bothered by the idea that unlimited access to heroin and its notorious “hard drug” brethren might make everything worse. Maybe drug legalization makes logical sense on paper, but emotionally it’s hard not to be alarmed by the concept.

Starting out with a historical look at the birth of the war on drugs in the 1930s in the United States, Hari explores how the battle has evolved and spread worldwide since that time. He presents profiles of various key players in the drug war’s bloody history, from users to sellers to prosecutors, detailing how countless lives have been destroyed by drugs and the battle against them. 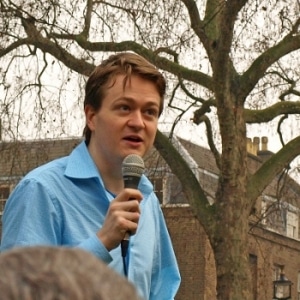 The author speaks out in London in 2011.

He then goes on to explain how it’s all gone so wrong. Exploring the mysteries of addiction, the development of the illegal drug supply industry and the often brutal approach to drug law enforcement, the author makes a convincing case for some sort of substantial drug reform, conceivably even full legalization. Finally, he visits some of the places where drug reform has been tried, from Oregon, Colorado and Vancouver to Portugal and Switzerland. He provides an in depth look at the different philosophies that have led to various experiments and attempts at drug policy rationality.

Approaching the topic with a powerfully conveyed belief that even drug addicts are people worthy of our compassion, Hari’s writing is gut wrenching at times. He clearly describes how his thinking evolved over the years of research and writing for the book, and how what he’s learned has made him determined to try and start a groundswell of support for the end of a hundred years of unnecessary death and destruction. Much more than a confirmation of his previously held opinions, his research busted many myths that he had held previously and that even the pro-legalization crown espouses at times.

A Cambridge graduate, Hari has had an extensive journalistic career notable for one major bump in the road. In 2011 he was let go as a regular contributor to The Independent following accusations of plagiarism. Attempting to resurrect his career following this scandal, Hari has provided extensive references in this book, including audio files of all source interviews on the book’s website.

Opposed by a plethora of well-funded and powerfully entrenched foes – law enforcement, drug lords and the prison industry – drug legalization is a topic that is sure to stir up fervent opinions all around. Chasing the Scream tackles the issues unflinchingly and is a well-conceived, passionate and riveting argument for a complete overhaul of how society handles recreational drug use. Balanced in his approach, Hari frequently and honestly voices his own doubts about the wisdom of this plan, but in the end his opinion is crystal clear. The War on Drugs has failed just as Prohibition did and it’s high time that people recognize this fact and act to terminate this futile conflict once and for all. Highly recommended.