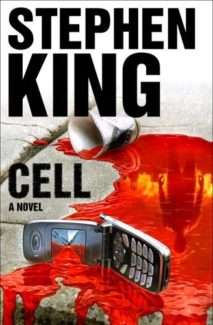 Apocalypse by Cell Phone: Can You Hear Me Now?

Clayton Riddell, separated from his wife, is just now beginning to hit his stride again. His formerly depressed mind is reeling with the excitement of a job offer, bringing alive his comic book heroes with the intense artistry he loves. However, his dark imagination on paper is nothing compared to what he’s about to see when the world around him is transformed into a bloodbath. Hapless cellphone users, whether plugged in teens, busy corporate moms, or smooth talking sidewalk vendors are all suddenly effected by a mysterious transmission, later known as The Pulse. Seemingly rewired from whatever signal they’ve received, formally upstanding citizens begin to tear each other apart in the street. The few non-phone users in the group become the target of a baseless, primal rage and within minutes the sentience of an ultra-technological world is reverted into a simple kill-or-be killed impulse.

As Clayton navigates this inexplicable world of psychotic violence, he saves Tom, a gay man haunted by the scars of a fundamentalist upbringing, and Alice Maxwell, a teenage girl, now orphaned and desolate. Later a prep school teacher and his one surviving pupil join the disconsolate entourage. Together, they traverse New England, following Clay back to his home where he prays that neither his wife nor his son have been answering the phone. . . or met any of the strangely altered phoners.

As Clay and friends take a stand against the phoners, King explores the familiar zombie mythos while simultaneously turning it on its head. The protagonists/refugees travel by night, as the days belong to the newly forming flocks of phoners. The phoners are still very much alive and breathing. They are daytime creatures and while they have the physical debilitation of zombies (multiple, seeping wounds, broken bones, and clothes in various states of disarray), the horror lies in the very fact that they are alive. . . and unfortunately smell very much alive. It’s essentially a conceptual mega-brain with little to zero concern for the individual cogs that make up a sentience that is more ephemeral than elemental. The phoners must eat. They must sleep, or at least “switch off.” They have an eerie love for old music that somehow ties into their hibernation cycles, and as time passes, their developing conscious points towards a predilection for manipulation, likely leading to a new prevalent domination of a centralized, pseudo-psychic Hive Mind.

The eeriness and desolation forced by a sudden shift from the normal to the inexplicable builds on the apocalyptic atmosphere of a gritty zombie story with some added in elements shadowing The Stand. When Clay’s group, disturbed by their observations of a growing and focusing power among the phoner flocks, brutally torches a group of helpless hivers, the dreams begin. Fellow survivors, most of whom are more dangerous than the phone people, are afraid of Clay’s group, shunning them as outcasts. The Hive is telling them to. For some strange reason, the Hive is temporarily protecting Clay and group until they get to their destination – and its perhaps this element that bodes the most evil portent. Meanwhile, a representative from the faceless, shuffling, dirty Hive, the man in the torn Harvard shirt, is appearing in dreams and in real life, and his powers extend to telepathy – the first echoing, eerie communication of a silent, amalgamating horde with an unknown programming and an unforeseeable evolution. Cell then shifts away from the survival of our three main characters into a “save the world from ending” scenario where humanity, at least in its familiar form, is rapidly becoming extinct.

Cell is an atmospheric thriller that will keep readers questioning but never fully invested. The slam at society (i.e. look how our constant need for our phones has made us into zombies) is surprisingly subtle, yet the reasoning behind the attack is too inexplicable and the theories as to what The Pulse was, what it is doing, and what it will eventually do are simply too nebulous . . . can I even say un-scientific? The breakdown of how the brain works and how the layers can be peeled back to reveal elemental man ready to reform in a whole new way (sans moral code, sans rules, sans structure) have a Mystery Science Theater quality that readers try to ignore because despite it all, the premise is entertaining, albeit convoluted. We want to believe even though many times we just can’t or have to pause.

Unlike that beautiful classic, Night of the Living Dead, the speculations regarding The Pulse undermine its power to terrify instead of magnifying the inherent realm of bad possibilities engendered by seeing the horrific effects without ever being able to trace the instigator of the cause. With Night of the Living Dead, the speculation was brief, a few newscasts, some murmurs of biological warfare, but these all took a back seat to just surviving. Also, it’s one intense night. Here, we have a longer stretch of time and drawing out the hypothesis doesn’t work as well under that frame. The speculations get way too specific and unfounded, but in a kitschy, war-machine computer sort of way with hints of an electronic virus and the brain being programmable. Ehhhhh…….. no. Even the “everybody is saved but everyone is now dead inside” ending, admittedly a “cheerful” conclusion by King standards, feels like an addendum to a draft that had greater intentions and got butchered on the editor’s floor.

The main Hive man presence never comes to fruition either (unlike the Ragged Man in The Stand) and the compulsion behind the dreams is simply dropped. It’s a “saved by the bell,” deus ex machina conclusion that leaves readers feeling as though a major portion of the plot was removed or simply forgotten. We were entertained, yes. We had a “good” time (well, for something so depressing), yes. But the characters, despite the trauma, were unreal cogs in a glitchy motor that while complicated looking never managed to actually get anywhere.

Cell is not quite there and while it has the guts, most of the frame remains shaky at best, missing at worst. Pseudo-recommended if you want a beach read with zombies who are not zombies and technology gone bad, but nowhere near the depths of understanding and intuitive writing that King can achieve.