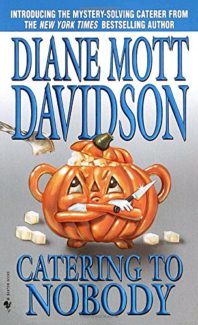 Serving Up Murder – Or is it Cold Leftovers?

Thanks to several mystery book lots from eBay, a love for kitschy covers, and a host of friends who read and love everything penned by Davidson, I decided that is was finally time to immerse myself in the popular Goldy cozy mystery series. What’s not to love about plates of delicious steaming food, a feisty caterer, and the wide-open mountainous beauty of Colorado? Enter Catering to Nobody, the first offering in a (currently) 17 book long series.

The cozy was killed pretty early on in the first chapter when Davidson reveals the nature of her heroine’s life which is simultaneously ludicrous in that “Southern belle” way and surprisingly dark. The main character is named Goldy Bear and although she might be in the (former) Wild West, you can practically hear the drawl behind every saccharine sweet phrase, especially when she joins with her embittered woman’s club or even worse, half flirts with police detective Tom Schulz. Add in some cowboy hats, fancy western shirts, and cowboy boots (worn to funerals no less) and you have a strange atmospheric mélange which is neither realistic or sensible.

That’s not really the worst problem, however, since cozy readers are quick to forgive and can even enjoy the overdrawn kitschy-ness at times. It’s the secret brooding horror, made light of, that gives the readers that first tingle of “oh, I’m not going to like this.” Goldy, single mom and premier caterer is the survivor of a bad marriage – and by bad I mean heinously abusive. In the first chapter of Catering to Nobody we learn how her ex, innocuously referred to as “The Jerk” (as though we’re supposed to laugh) has beaten her with a hammer, broken various bones, and hospitalized her at times. Now, divorced and on her own, Goldy has befriended her ex’s other discarded wives, joined by a pact of violence and secret shame that only gets let out at awkward girl’s nights over cheap wine. Meanwhile, The Jerk, a respected town doctor and his equally respected gynecologist father, Fritz Korman, remain in town and living the high life. The Jerk even pauses on his errands to yell abusively at Goldy as she shops or goes about town. And this is cozy… how!?

If you thought these grisly details were just backstory, then you’re wrong. At the funeral of her son’s beloved teacher, The Jerk and Korman, alongside Goldy’s drunk ex-mother-in-law and somehow friend, are all in attendance. The Jerk’s even got his new squeeze in tow and Goldy is determined to remain servile and nice to a man who taunts and torments her. As if this cheery little gathering couldn’t get worse, when Korman collapses from a poisoned coffee, the finger of blame is placed squarely on Goldy, whose business is shut down until justice is served. Meanwhile, more bodies are pilling up and the death of Arch’s former teacher is looking less like a suicide and more like a planned set-up. Could it all be related somehow?

Barely making ends meet despite her teenage lodger, the lazy Patty Sue, Goldy, despite all her sugar and spice reserved for the host of reprehensible, and utterly unbelievable villains, has just enough grit to stick her nose squarely where it doesn’t belong – mostly into other people’s medical records. She does this laconically, and half-heartedly, the typical cozy mystery sleuth who only gumshoes incidentally, with many pauses and breaks that nevertheless lead her right where she needs to be – in confrontation with a wanton killer. Before we get to that point, we have lots of time to fret over Goldy’s teenage son who is worrisome because he plays D&D (eye-roll here, judgmental, much?) and he might also know something about his teacher’s untimely demise.

Along the way, a financially suffering Goldy is chased by detective Tom Schulz who is less interested in solving murder and more determined to capture Goldy’s heart. His advances are seriously thwarted, yet the love-lorn detective, obviously the romantic interest for the story, remains adamant and unaffected.

In the conclusion, as listless readers slowly turn pages and barely make it through  the chapters of Catering to Nobody, the bored killer announces himself in an ill-fated, yet concise (no more than two pages) confession. Guess he got tired of everyone waiting around to figure it out. As with all cozies the danger is quickly done away with, the perp brought to justice (even though his confession doesn’t quite make sense and the loose threads are only barely tied together), and the characters happily ever after until they somehow wind up at the scene of another murder.

As a confirmed cozy mystery addict, I have to say, I just don’t get it. I didn’t see the pull to this evidently much loved series. The characters were unlikable – all of them. The plot too slow and not cozy enough. The jiving around with serious issues of abuse and putting that under a “cozy” headline is insulting and insensitive, and the mystery poorly explained. Picking at any of the threads within the conclusion would lead to the entire mess unraveling and instead of trying to wrap our collective heads around it, we just close the book, say “there, done,” and happily jump to another series. Perhaps the later books are better – there must be a reason why people love this series so much. As of yet, I remain unimpressed by Catering to Nobody.