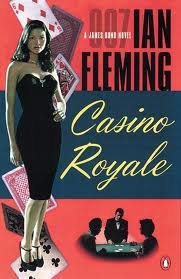 The First Bond Novel is an Edgy, Disturbing Must

In 1953, closeted in Jamaica at his Goldeneye Estate, waiting for his own marriage, Ian Fleming created a legend that has long outlived both him and his initial story lines. Introducing the hardened spy, sometimes assassin, James Bond, and capitalizing on Cold War tensions, Casino Royale begins a series that will breed many adaptations – including movies which are still being produced today. As the series grows, expands, and starts over again, Bond exchanges one suave no-nonsense personality for another, evolving with the changing taste of audiences and the thankfully redefined societal acceptableness of a cold, patriarchal world. But here, in the first, original iteration, Fleming’s classic character shines with a rough and tumble grittiness in a tense world of high stakes, high action, and devastating betrayal.

Having already earned his double O status in blood, Bond’s risky lifestyle and renowned gambling prowess has caught the attention, and hope, of the British Secret Service. Criminal overload and deadly Russian agent Le Chiffre is deeply indebted to SMERSH, an unstoppable, Gestapo-like Soviet organization. Fifty million francs in debt and close to forfeiting his life, Le Chiffre is hitting the elite Royale-les-Eaux casino in a desperate bid to win the money before it’s too late. He really does have a chance, too.

However, if he were pitted against Bond, backed by British and American money, it would be possible to destroy the criminal in a game and leave SMERSH to do the dirty work. It’s a risky strategy, littered with would be assassins, double-agents, and unexpected torture. As a matter of fact, the high stakes, high danger swankiness is James Bond to a T – or so he thinks.

Escorted by CIA agent Felix Leiter,  French Deuxieme Bureau compatriot Rene Mathis, and stunning Bond-girl Vesper Lynd, Bond is ready to take down one of the most notorious and dangerous criminals. The attempt, however, will forever change Bond and his outlook on his own role in the moral wasteland of political intrigue.

If you’re expecting the Bond of the movies, especially the newly reimagined Bond with all his sensitivity (aka 2006 reboot film) then you’re in for quite a shock. Originally the ultimate anti-hero, or even more specifically the passive villain, Fleming’s Bond is just another bad guy fighting bad guys in a soulless world of international corruption. The intrigue here is from a plot standpoint and while Bond is decidedly weaker (not so much the macho straightening-a-pristine-tie-while-walking-away-from-an-explosion guy) he is also emotionally less compelling. The man is a downright woman hater (and racist). This was put down to Flemings own peculiar-ness and, ummmm, worldview. The difference means that Bond is hardly the hero you want your son or daughter emulating. He isn’t the cool guy that women want to be with and men want to be like either, at least to modern audiences. Regardless, Bond is still exciting and the tension and decadent surroundings compiled by intrigue and secretiveness are everything you ever thought the Bond series was. So it’s different – definitely not better – but still compelling if you can get past Bond’s evident sociopathy and chauvinism.

The novel itself has what can essentially be seen as three separate parts. First we have the high octane baccarat game, complete with cleverly disguised assassins. The card playing is rendered more tense than the films can do justice too, the terse words and sweat inducing pauses keeping readers (including those of us with no idea of how the game is played) deeply attuned to the pulsing atmosphere.

After the card game, which consumes a good many chapters, the second portion of the narrative unfolds. Vesper, the air-headed but delightfully bed-able female companion to Bond is abducted right in the middle of the celebrations. Without much true desire, and even less chivalry than imaginable, cursing her all the way, Bond takes out into the night to retrieve the agent. Instead, he falls into a cleverly construed plot and the true villainy of the piece begins. Fans of the film will recall the bottomless chair sequence and the brutal whipping that accompanies the open credits. This particular dark imagining is lifted directly from the book itself and covers an essential turning point in Bond’s typically thoughtless patriotism.

For the first, and last time, Bond delves into actual moral questioning of his career and position, only to be subsumed by lust for the luscious Vesper who feels that she must repay her regretful valiant in, of course, the only way a woman can (I’m being facetious here). Proceeding with “love” scenes where Bond gets downright lyrical about how his lovemaking evokes the “sweet taste of rape” the blissful romance soon goes bad. Vesper’s strange reactions and midnight calls to an unknown number leave Bond tense and despite our anti-heroes hard nature, his reactions to Vesper are leaning toward actual love. This particular plotline, which composes the last third of the book, will define both Bond’s future relationships and estimations of women and his permanent career decision.

Interweaving terse yet descriptive writing with a vibrant plot, Casino Royale is just as enjoyable, and evocative, as it is weirdly disturbing. Sure to shatter your images of Bond, it’s nevertheless worth the pain to indulge in Fleming’s violent school of spy thrillers. Edgy, evocative, and uncomfortable, Casino Royale is the original instigator of the James Bond legacy and as such is an essential experience for the Bond aficionado.