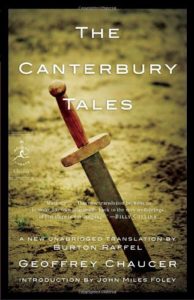 Bawdy and Brutal: Not What You Expect

Once again, engaging on a classics kick, I come full circle and return to Chaucer. I encountered his works, largely in snippets of “The Wife of Bath’s Tale,” in various college literary courses, and while the language was just as difficult as it was beautiful, I didn’t have a true sense for the master of verse or, I realize now, The Canterbury Tales themselves. Bouncing everywhere from bawdy to downright badgering (i.e. “The Parson’s Tale,”) this partial collection of 24 short stories, which was intended be a large tome with four stories per pilgrim (there being 30 pilgrims!) is touted as Chaucer’s most famous work and the progenitor of English as the common vernacular in literature.  It all begins, of course, with a religious quest to go to the Shrine of St. Thomas a Becket that begets some storytelling to while away the weary miles of travel. In this unlikely situation, a host of classes and peoples mix that would normally not interact, and some of the stories get pretty aggressive rebuffing previous tales, leading to a sharp edge that pokes through the humor and highlights social issues and divides.

Even as an English major and dedicated bookworm, I didn’t dare (or frankly want to) encounter Chaucer in his native tongue. Old English is essentially another language, our everyday speak having evolved so far from its origins as to be a separate and distinct entity. Don’t believe me? Have a sampling from the beginning of the “The Miller’s Prologue.”

Whan that the Knyght had thus his tale ytoold,

That he ne seyde it was a noble storie

And worthy for to drawen to memorie,

Give up? While some of the words are easy enough – Knyght is obviously Knight, ytoold is told, and whan must be when, some are less evident. What on earth does “unbokeled is the male” mean? In plain speak of our times, here is what the above passage says (and no, I am not the translator, merely an expert at the art of copy and paste).

When the Knight had thus told his tale,

In all the company there was no one young nor old

Who did not say it was a noble story

And worthy to draw into memory,

And especially the gentlefolk every one.

Our Host laughed and swore, “As I may move about (I swear),

This goes well; the bag is opened.

My debate over whether I should read the “real thing” in its original vernacular as averse to a translation was vicious, but brief. I needed something I could listen to and absorb, with the hope of ultimately understanding it, even if that meant sacrificing the cadence of the poetic verse (translations always fail on this account). I searched around Amazon and settled on the unabridged translation by Burton Raffel which in my audio book edition was narrated by a cast of six.

My reaction is hard to articulate: I both like Chaucer more and less than I did previously. Admittedly, I always found “The Wife of Bath,” which my classmates drolly laughed at, rather boring and overdone. Yet some of the stereotypes of society and Chaucer’s sardonic criticism of everything from the sacred to the profane was titillating in the tongue and cheek manner of a Monty Python sketch. Stories such as “The Miller’s Tale” depict the upmost of the absurd and while over-the-top, it’s done in such a way as to be enjoyable and uniquely Chaucer-ian. Of course, for every good story there was also an “eh” story such as “The Shipmans Tale” and then there were the stories that embody everything you ever hated about reading in general and English classes specifically – “The Parson’s Tale,” “Sir Thopas’ Tale,” and “Tale of Melibee,” each of which is an endless dissertation and not an actual short story. When Chaucer is good, he is amazing. When he gets captivated by a long-running tangent or just goes all Middle English moralizing on us (complete with hellfire and dutiful wives) literature becomes akin to Sisyphus task of constantly pushing that bolder up a never-ending hill.

The good stories, and there are plenty, are not what you expect or even fear. Far from being pretentious, they are earthy and bawdy, often concerned with the schemes of feckless woman and their lovers and farts. Yes, you read that correctly. The good stories, or more appropriately labeled, my favorite stories capture everything from  “The Miller’s Tale,” a story involving a naked rear-end, a joke, a window, an apocalypse story, and a glowing poker; to “The Reeve’s Tale” where greed and corn are used in fabliau form to bring about some mistaken identities and accidental sex; to  “The Clerk’s Tale,” a surprisingly dark story of spouse abuse where Chaucer puts aside the sex and bodily humor to hone social critique and note the devastation of seeking perfection. While the jocularity of the narrative, largely carried by the framing device – i.e. the host that requires each pilgrim on this religious quest to tell an amusing tale, remains present to more or less degree in each story, the bawdy can also give way to the heartbreaking and the thought provoking. These stories make you laugh, cry, cringe, and even think of a Medieval Arabian Nights, sans desert and camels.

The stories where Chaucer “missed” however, are truly beyond pain. Having a penchant to lecture, Chaucer on a tangent is a terrifying and unstoppable thing, bulldozing all before him. The classic example is the concluding tale, which is by far the longest, from the Pardoner which involves a lengthy hell-fire-and-brimstone sermon calling the “sinner” (a worry repeated so often you practically see it floating in the air) to repent, for essentially everything. This isn’t a story. There are no characters, no plot, and seemingly no clever trick. It’s not obvious here what Chaucer wanted to do with this story or whether he even agreed with his own character, who effectively would have condemned his flippant collection of stories as nothing less than sacrilegious. The point apparently eludes scholars as well, which made yours truly, a general reader and hardly a coinsure, feel significantly better.

Is The Canterbury Tales worth the pain of a few truly longwinded and rotten stories? Ultimately, yes. The good stories are not only enjoyable in the moment, but the entire collection itself serves as a snapshot of a time and commingling of disparate peoples that allows for some thoughtful and some fun storytelling. If you want to go all the way and meet Chaucer on his own ground, however, I recommend first reading a translation and picking a particular story before diving into the confusing realm of Middle English language.