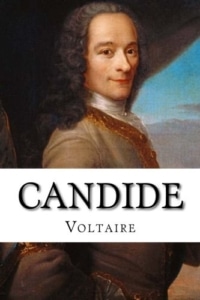 Back on my classics kick, I returned to my randomized Excel list and was dismayed to see the next selection was Candide. Even the audio book cover itself, depicting a smiling gentlemen in powdered wig, dredged up images of marble busts and tedious lectures. I was pleased to find out that the unabridged audiobook, however, was only three discs and figured that anything could be survived for that long, no matter how stuffy and unappealingly old school. Soon, however, my relief over the shortness of the text transformed into disappointment as the bawdy, saucy, sardonic, tongue-and-cheek, absurdist adventure of Candide and cohorts wound to a conclusion. The story was audacious and rude, humorous and cynical, irreverent and flippant, and above all hilariously entertaining in the way of all dark comedies. The further I progressed through the series of unfortunate events, the more I wanted the facetious little story to continue and expand.

Poking fun at society and particularly at the “all’s well and all works for the best” theory of optimism (Leibnizian optimism if you want to go all classical historical), a young Candide is forced out of an idyllic castle life due to his, shall we say, inappropriate interest in the young baroness, Cunégonde. Determined to hold fast to the philosophy of his disgraced mentor, Professor Pangloss, Candide strikes into the world, convinced that all his continual misfortunates somehow work for the best.  Determined to one day be reunited with the beautiful Cunégonde, Candide encounters ever more absurd circumstances including coerced military service for the Bulgars, an encounter with the vitriolic (although distinctly inefficient) Portuguese Inquisition, capture by cannibals, a trip through the legendary land of gold (El Dorado), encounters with syphilis, jealous brothers, religious and political persecution, and numerous horrible tidings of those he has loved (and perhaps lost – or perhaps not lost!) at home.

Secondary characters, eccentric catalysts in Candide’s naïve world-journey and painful coming-of-age narrative, enliven the Monty Python-esque atmosphere. We have the Old Woman who rides along with Cunégonde and Candide although, as she amicably notes throughout, she can only sit upon one buttock. We have the ever pessimistic scholar, Martin, who goes through life with a dour twist and the devoted and wily servant Cacambo who seeks the world over for Candide’s true love. We have dishonest priests, jaded Jesuits, beneficent kings, and mistress seeking merchants.

Candide and his rag-tag company go from rags to riches to rags again. Battles, rapes, bestiality, cannibalism, and religious persecution are weighted with snide cynicism and a certain skit-like aura as the story jangles from section to section, pausing and then leaping forward in time. It’s a cacophonous journey – one filled with peril and stories that will keep the reader laughing while also being a bit depressed with the heavy, black humor of it all. It’s the ultimate modern, in-your-face world sort of diatribe, and audiences won’t hold the image of marble busts and grey wigs long. Indeed, soon you start to notice that Voltaire, depicted on the cover, has a certain something of mirth and wickedness in his eye, like he is letting you in on a secret. Perhaps the secret here is that classics can be utterly bodacious and something with hard, fancy names, and ancient places can be a downright dark comedy where nothing is sacred and human absurdity is touted as the ways and means of an ever devolving world.

Taunted as one of the most popular voices of the Enlightenment Candide earned Voltaire his place in the Western cannon – and it’s not hard to see why. The message is impactful, albeit one of hopelessness and a certain dogged acceptance of harsh reality. The tale is just fun with something of a blend of those famous British classics Monty Python’s Flying Circus and, even more contemporary, Blackadder. A classic with some verve and a delightful dirty mouth, Candide will indeed go there. Part coming of age tale, part odyssey, part fantasy, part ill-fated love story, and all irony, Candide is a short little tribute to a messed up world and all the protagonists that somehow survive it.

*A Note on Edition: I listed to the three hour, unabridged recording of Candide by Tantor as ready by Tom Whitworth. As usual, Tantor remains the masters of bringing the classics alive. Whitworth elegantly manages the names and places, allowing readers to sink into the cynicism of the tale and to embrace the lively verve of each worsening accident.