Call of the Cats 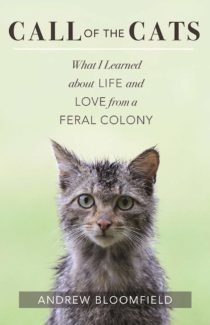 Life and Death in a Feral Cat Colony

Andrew Bloomfield moved to California hoping to make it big in the movies. Instead, he devoted twenty years to cats.

After nearly becoming homeless, Bloomfield moves in with an ex-girlfriend and her friend. In their out-of-the-way, Southern California bungalow, he discovers an enigmatic feral cat population. Putting out the occasional bowl of kibble soon transforms into midnight duties of keeping predators away from delicate kittens and then morphs farther as Andrew and his friends find their life taken over by the aging feral colony.

A similar sort of thing happened to my husband and me when we bought our house. Little did we know that it came with one aged, near toothless feral, whom we named Garfield, who is having a good nap on my bed as I write this. Garfield was part of a large feral colony that we, and several neighbors, still diligently tend. A little before Garfield’s health caused us to capture him for some treatment before what was supposed to be his release back into the wild 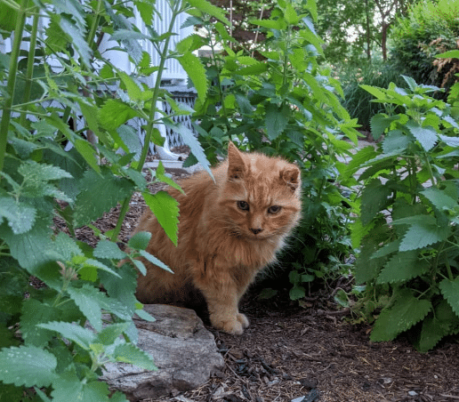 Garfield during his feral days among the catnip plants I grow in my front yard.

(which didn’t happen because he demanded the luxury of his new inside life) we’d also come by two semi-feral cats through fostering with a local shelter. These two cats, who remain more feral than many of my true-ferals, are totally unadoptable, and so they joined our house kitties on a permanent basis. As time has gone on, I’ve learned a lot about cats, strays, semi-ferals, and ferals, and all the differences between them, as well as the unique challenges of caring for cats (both inside and outside) that you can’t actually touch. We’ve since rescued two strays, Ghost and Romeo respectively, who we’ve fixed and, thanks to the patient guidance of a local rescue, saw adopted into loving homes; although I’m still a novice in the rescue world, my knowledge continues to grow. This is around the time that Call of the Cats showed up as a display at the Annual Library Association held in DC, and I just knew that I had to have a copy. I need all the help I can get.

What is surprising (and disappointing) about Call of the Cats is that Bloomfield seems to remain inexperienced through most of the memoir. It takes him and his housemates a long time before they are willing to let go of the “leave nature to itself” mentality and help the ferals around them. This leads to a lot of brutal moments in the story as Bloomfield relates stories of mother cats who fail to care for their infants (eating them in some cases), predatory raccoons who pick off sweet babies, and one little kitten left to yowl in the cold as the inmates of the house desperately ignore his pleas (they eventually do rescue the kitten, but since they waited so long he is left with life-long neurological and other health issues.) It’s exasperating, to put it mildly; anyone who has watched even a few nature shows knows that baby animals die (horribly) more often than they survive. Yet, Bloomfield and his companions try to remain stoic, and the results are heartbreaking and morbidly (intensely) described. Yes, I get “not wanting to be involved” and not wanting to take on responsibility, but STILL. At least take the cat to a no-kill rescue organization. 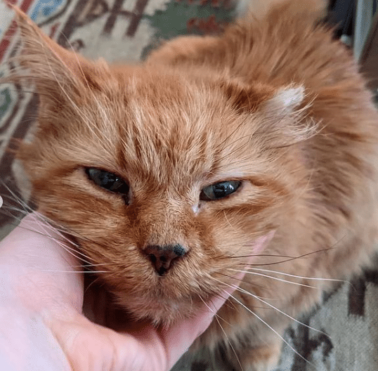 Once Bloomfield does finally accept his responsibility to the ferals, he goes about it in what I consider to be strange and desperately unsustainable ways. He sits outside all night to chase raccoons away from the kittens – something far more difficult and involved than taking the kittens in. It takes him years to realize that the obvious answer is TNR – trap, neuter, and return. Despite the ongoing debate about the approach, it really is the only way to help true feral cats. Anyone who cares for a feral colony daily finds this out very quickly.

When Bloomfield does allow a cat (or several cats) into the house, I also felt that he made a lot of mistakes. He takes kittens in after they are way too old to acclimate, and then wonders why they don’t want to stay inside. He encourages inside and outside cat life – in a big city! – and is then surprised when this also goes wrong. They spend a lot of time searching for and/or recapturing inside cats in this way.

Beyond my own disagreement with the way Bloomfield approaches his colony – truly, there are a lot of great resources out there and your local rescue organization can put you in contact instantly with experts and walk you through it – the general cadence of Call of the Cats is just off. Bloomfield spends a lot of time talking about things that have nothing to do with cats whatsoever. He talks about an amalgamation of spirituality (mainly Buddhism and new age, but other things are mixed in there too), which has nothing to do with the cats or his approach to them. He goes off on tangents about selling art and even has a chapter about his astrology, which was of temporary interest to the Hollywood elites around him. It doesn’t tie together. Even the images of the cats he writes about are poorly done. Yes, I get printing in black and white to save money, but why the funky looks-like-a-free-filter-app effects that make the cats hard to distinguish from one another? 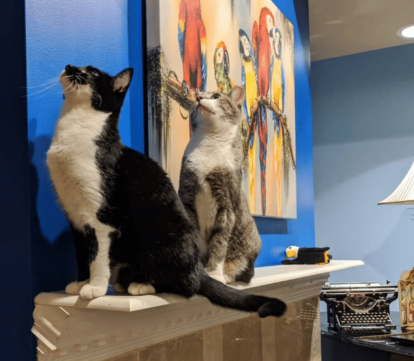 My two semi-feral kitties, Domino and Suduko, earning their keep with a little bug hunting.

Finally, if you’re looking for a warm and fuzzy about saving cats, this is not the book for you. Mostly, I found it sad, disturbing even. Yes, feral colony care (and rescue in general) can be utterly brutal, and that has to be acknowledged, especially for anyone interested in actually helping. The hardships for ferals and what their litters go through also MUST be spelled out, otherwise people won’t see the need and won’t help. More importantly, they won’t spay/neuter and return ferals to their habitat. That being said, gratuitous descriptions of dead kittens left me more enraged with the author and his manner of at first avoiding and then later approaching the colony. He showed the stark reality, but the call to action was muted and ultimately weird. No one involved in the colony ever gained any advanced knowledge about cat care (at least that was described) and twenty years later, they all remained well meaning novices who, yes, did help the colony a lot, but ultimately could have grown more and done better.

What mostly came through was hopelessness tinged with exhaustion, and while rescue can be both, there was no need for it to be as exhausting as it was (I say this mostly about the first several years before they discovered TNR). The call from the cats here is presented as one that most readers will be terrified to answer, instead of being the rousing call that it needs to be. Ferals are out there; ferals need your love and help; and while you may not be able to do everything you want and need (Bloomfield is honest about the prohibitive costs) there are resources that can provide help and guidance. For someone interested in helping out their local ferals, this book leaves them with nowhere to go, just a weird story that ended up being a pseudo-success after a lot of cat death and human exhaustion. The call is half answered, the people tired and deflated at the conclusion, the carnage great, and the path of human distress and disillusionment almost as great. It’s a strange portrait of the world of cat rescue and feral help, and I don’t feel that it is a terribly accurate one.