By the Shores of Silver Lake 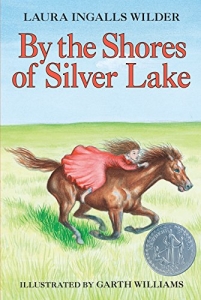 Little House in the Wild West

Transiting from eking out a hard existence farming the blighted prairie, Pa Ingalls is prepared to leave the snug house on Plum Creek for a new adventure further west, this time as a temporary railroad man. Recovering from a family wide bought of fever which has shockingly cost Mary her sight, Ma is hardly willing to tear the girls away from a good town with a school and a church, but difficult financial times once again sets the family on the wilderness trail, leaving another happy yet failed home behind. The fifth book in the Little House series, By the Shores of Silver Lake, is a more “wild west” adventure with railroads and a burgeoning town, the bustle of which initially captivates Laura but leaves her longing for the silence and coziness of the prairie. As more groups of settlers arrive, the Ingalls’ desperate financial situation seems to be transitioning for the better. Perhaps, soon, they can get their own plot of land and build another house, starting over on the shores of the gleaming, bird filled Silver Lake.

Following on the heels of On the Banks of Plum Creek (my personal favorite of the series thus far), By the Shores of Silver Lake adds a different flavor, introducing more than a tinge of sadness. Jack dies early in the book after much neglect, leaving Laura extremely miserable. Mary has gone blind from the fever and Laura must now be her “eyes,” describing the shifting world around them, including the girls’ first ever train ride. Readers sense that a great deal is unsaid about the Ingalls’ poverty and state of debt. Laura deliberately and swiftly glides over the dire circumstances to concentrate on the overtly happy nature of the narrative which is still meant for children but is struggling here to keep harsh truths if not totally hidden, at least bearable. There’s also more of the traditional Western motif with rough railroad men, a town emerging from the prairie, and a certain, terrifying degree of lawlessness and danger. All of this combined makes Silver Lake both a harsh and exciting time in the book series and adds more tension to the autobiographical series as we now have to worry about Pa in his new job, overseeing a rough, drunken, and unruly crowd.

Despite the more desperate nature of the Ingalls’ lives, and a certain rift between Ma and Pa that is sensed over the dangerous decision to adventure onward, the memoir still maintains a strong degree of that addicting Little House wonder at life and nature that captures the beauty and magic of childhood. Silver Lake itself is stunning, teaming with vivid descriptions of wildlife. Along the journey, the Ingalls reconnect with old friends and family and Laura makes a new friend her own age. As depicted on the cover, Laura has her first wild horse ride, galloping across the prairie in this liminal moment between adult responsibility and the last shimmering rays of childhood. Through the railroad and train, Laura continues to encounter new worlds and she shares her sense of amazement at both the wonders of nature and the developments of humans. It’s a heady mix of awakening to the populated world and maintaining a stolid connection with her childhood imagination and hopes.

Ultimately, On the Shores of Silver Lake combines an indomitable spirit, a child-like perception of a world always beautiful, and the risks and scant rewards of pioneer life. Continuing to be undaunted, Pa is ready for another adventure, despite his family’s desire to settle down and only Laura recognizes the wild siren call of continuing West against all odds. Choked with some veiled tears, the story still appeals to the heart of a child and the mind of an adult, creating nostalgia and a simpler-way-of-life perception while reminding all readers that it is not what life gives you, but how you react to it that makes all the difference.‎

*A Note on Edition: I have both read the beautifully illustrated edition (sooty, distinctive images provided by Garth Williams) and listed to the audio version read by Cherry Jones. It’s hard to pick a favorite rendition. The book allows the Ingalls’ voices to echo in the reader’s mind, evoking the text strongly and encouraging Laura’s sense of imagination. The audio book, on the other hand, defines the voices while simultaneously letting Pa’s fiddle really sing. In both instances, the worlds are alive in unique and enjoyable ways, making me say that since this is a book you will obviously return to re-read, start with the hard copy (and its remarkable drawings) and then supplement the rest of that vivid universe with the audio edition.