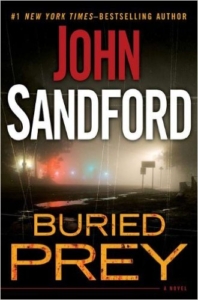 Haunted by the mistakes of youth, hard-bitten police detective Lucas Davenport returns to an unsolved kidnapping/potential double homicide from twenty-five years ago. Suspecting something strange at the time, the youthful and rebellious Davenport had neither the position nor the tenacity to thwart his superiors and follow his suspicions to the bitter end. Now, all these years later, a new construction site unearths the brutalized bodies of the two missing girls and Lucas returns to the case, riddled with guilt imagining all of the girls who have died at the hands of the killer he allowed to escape all those years ago.

Imbued with the resilience of a second chance, the analytical Lucas approaches the case with a yen for puzzles and the desire for one final challenge. Although the clues at the time of the kidnapping pointed to a local homeless man with a supposed penchant for underage pornography, a mystery caller revitalized the case when it hit a dead end leading Lewis to speculate that the real killer was orchestrating both a frame up and the police investigation. After a heart-pounding confrontation with the crazed, homeless man in the sewers and the unseemly death of the alleged murderer, sleeping dogs were allowed to lie. But that effortless ending, delivered so perfectly, never satisfied Lewis and now it is time to pour over the past again, to bring alive the tension, the fear, and the failure. Along with the girls’ corpses, something dark and hidden has been unearthed and Lewis must confront both a killer and his own ineptitude – the time that he gave in.

Noted as the 21st book in the Prey series by John Sandford, this was actually my first introduction to both Lewis and Sandford’s unique, crime thriller/tough cop mystery narratives. I ran into this book, and hence its author and widely acclaimed world, in another of my eBay mystery book box binges. The audiobook, read by the gravelly voiced Richard Ferrone, with its intense cover and somber write-up captivated my fiancé’s curiosity, and so we began listening to the unabridged Penguin Audio version, galloping into a world of which we knew nothing.

Surprisingly, despite being exceptionally far into the series, Buried Prey was easy to follow, combining the nostalgia of a remembered past, useful for introducing Lucas and giving readers a sense of his entire career and, hence, his development from a patrol man to a grade-A investigator  with a non-urgent yet encompassing mystery drama. This is, essentially, one of the few cop-thrillers I have ever read, since I tend to gravitate toward atmospheric mysteries (either cozy or Gone Girl-esque).

The rough and tumble world of investigation along with the macho realm of teasing comrades in arms creates the typical atmosphere you would expect. The characters are powered by their career motivation and, despite Lucas’ alleged guilty conscious, the story is driven more by Lucas’ inherent cop desire to know the answer to every puzzle. This makes it non-personal, despite its attempts to be otherwise, and yet the crafting of the mystery’s bygone gore and strange details enmeshes readers from an analytical, non-emotional part of our brain. We remain cold, fitting jumbled puzzle pieces of clues and potential motivations – an intellectual exercise that becomes grim as we go through the past, real-time, reliving the investigation with Lucas as he interviews prostitutes, street gangs, and other contacts who can tie together the gritty world of sex-crimes with the detail of the stalling investigation.

The structure of the narrative is unique, framed by the present discovery of the plastic wrapped, grinning bodies. Lucas goes down memory lane, launching readers into an investigation known to have veered into the wrong direction and then stagnated. This knowledge allows readers to focus on the process, trying to go through the steps with the investigators, second-guessing, watching the progression and attempting to pinpoint the errors, the moment where everything went wrong. It’s not the traditional who-dunnit, crime mystery approach and in this it’s a refreshing analytical exercise.

After journeying through the past, the novel comes back full circle to the present with the investigation reigniting buried details in the search for a perverted killer. Interspersed among the investigatory chapters, the killer’s dialogue is provided including current shenanigans and awareness of the renewed police interest in the missing girls. This adds some spice to the narrative and additional clues, prompting readers to guess along with Lucas, to put together both past and present data to finally discover the true horror of the girls’ murders.

The structuring of the narrative itself heightens the mystery. However, it is difficult to get involved from a character perspective. Lucas, despite his stated guilt, is hardly an empathetic personality. Cold and methodical, his interactions with others, from his lusterless affair with a married woman (a seemingly pointless detail in the framework of the story) to his interviewing of subjects feels so removed – what you would typically expect from a cop story. Lucas is hardboiled, a womanizer, a man with connections, a puzzle solving machine, but nothing exceptionally relatable. While we don’t expect him to gush emotions, we want to see them somewhere in the story. However, despite the murders and the disappearance of innocent, underage girls, the story remains an intriguing puzzle, but nothing more. The deaths merely serve the plot, adding complication to a string of entwined motives by never pulling readers’ heart strings.

As the renewed investigation elicits a new string of suspicious disappearances and potential murders the conclusion hurtles forward into betrayal and unearthed secrets. My fiancé was entirely entranced with the Prey series, digging through my mystery box until he unearthed another John Sanford novel, which he immediately popped into the car CD player. For me, I was involved in Buried Prey, enjoying the hardcore sleuthing. However, although it was an addicting read the lack of emotional involvement from Lucas left the entire story a little too “tough-cop” for me. The Prey series is not one I would object to reading, yet also not one that, on my own, I would necessarily gravitate too.

*A Note on Edition: My fiancé and I listened to the unabridged recording of this novel as read by Richard Ferrone. Ferrone has a deep, gravelly voice and an even pace that accentuates the action within the narrative while remaining true to the atmosphere and depiction of Lucas. The narrator and his style were a perfect match to the story and brought the storyline into vivid relief.