Always look on the bright side of … 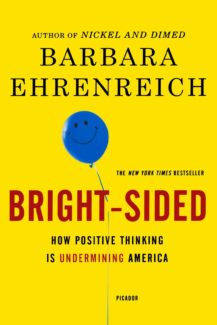 Are you a glass half-full or a glass half-empty kind of person?  Which kind of people do you prefer to hang out or work with?  I’ve read her book and I’m not sure how Barbara Ehrenreich would answer those questions.  While we’re taught from an early age to look on the bright side of any situation, Ehrenreich contends that in the United States this positive psychology has run amok, making a compelling argument for negativism in Bright-sided.

From the very first chapter of Bright-sided, Ehrenreich doesn’t pull any punches.  Attacking the relentless positivity of the cancer industry – often reflecting on her own experience with breast cancer – she exposes the cruel reality of the “Smile or die!” approach to the disease that treats it like a blessing in disguise rather than the horrible thing that it actually is.

Of course relentless positivism has found its way into numerous other areas of American life – from pulpits to corporate board rooms – and the author explores how this uniquely American phenomenon evolved from its miserably pessimistic Calvinist predecessor.  Always a land of extremes, the 19th century American mantra of “God wants you to be miserable” has been replaced by an equally irrational belief that “God wants you to be rich!”.  It’s the ultimate melding of America’s two founding pillars, Christianity and capitalism.  What could go wrong?  Well, plenty, Ehrenreich argues, directly linking irrational economic positivity with the economic meltdown of 2008.

While the author’s position could be misconstrued as an opposition to friendliness, cheerfulness or enthusiasm, it’s really more an argument against irrationality and delusion.  There’s really no way that we’re going to be able to solve the many problems that we face if most of society’s members persist in the simple-minded belief that positive thinking will extricate us from any dilemma, from cancer to economic straits to anthropogenic climate change.  Unfortunately, we seem to have entered a realm where by simply pointing this out one becomes ostracized as “part of the problem”.

Displaying her trademark ability to get to the core of an issue and dissect it with clarity and wit, Ehrenreich successfully exposes much of what is wrong with modern religious and business practices.  Directly inspired by the Great Recession of 2008, Bright-sided is a compelling look at how irrational positivism has brought us to the brink.  Just because you tell yourself the glass if half full doesn’t mean it actually is.

Check out Dave’s review of another Ehrenreich book:  Living with a Wild God