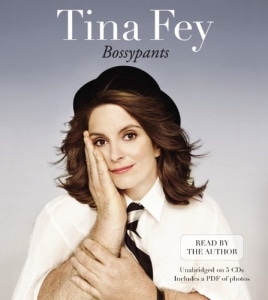 In Which Tina Fey Amuses While Avoiding Creating an Actual Memoir

Getting ready for the nine hour plus drive to spend Christmas celebration part I with the boyfriend’s family, the boyfriend and I bundled into the car with an array of emergency audiobooks, including Tina Fey’s memoir, Bossypants. Read by Fey herself and lauded as a sometimes motivational, sometimes satirical, and an always hilarious memoir, the peppy, down-to-earth passionate voice of Fey made the road trip easier and frequently had us snorting with laughter.

Yet, after finishing the last disc of the memoir, Fey’s expressive voice dissolving into the steady whir of highway noise, I felt dissatisfied the phrase “is that it?” echoing around in my numbed brain. Perhaps it was because of all the hype, the promises ranging from the bubbly back cover (or back of the audio-book) blurb and five star Amazon reviews creating high expectations. Bossypants promises to be a memoir – yet it’s really not. It promises to be a comedic round of jokes and hilarious stories – yet it’s not. It promises to shed light on the behind the scenes moments of Saturday Night Live and 30 Rock – yet it doesn’t. It hints at motivational speak and advice – but that’s not all it’s about. Really, it’s a combination of the above, a sort of stream-of-consciousness narrative that skims Fey’s life with the occasional more long term stop at a memory or even more likely an issue (the stigma experienced by female comedians, photoshopping and its effects on our society, breast feeding and social expectations of mothers, etc.) That’s not to say it’s not fun – it’s just not entirely obvious what the book wants to be, what the ultimate summarization is – and herein lies the core of my dissatisfaction.

Fey starts out describing her father, building out the details of her childhood and it seems like everything you expect from a memoir, details including many wry observations and laugh-out-loud moments. Here, we feel invited into Fey’s life and entrusted with her confidence. Yet, here also she pulls away from us. The separation begins with the details of her scar, acquired through a mugging as a child and her adamant stance that she will not share the gory details of the story (as it were.) Perfectly acceptable, yet distancing. The memoir then skims over the rest of her childhood, as though Fey has grown tired of talking about it, and we follow the sudden jump of her mind to teen years discovering the theater and hanging out with homosexual friends, coming to terms with their sexuality both socially and, more deeply, within her own heart. It’s interesting, it provides commentary, yet of all the details Fey could reveal, her teenage years and early friendships seem less critical than the details and stories of 30 Rock. The concentration feels off, making for the stream-of-consciousness aura. Fey simply writes about what she feels strongly about or remembers best at the time. This could be important or more of a sideline detail, even a social argument imbedded in the text of a timelined chronical of Fey’s life (i.e. the random incident of Photoshop and its effect on women/society which gets a stunningly large amount of page space proportionally speaking.)

As the memoir comes further into Fey’s adult life, she pulls back from us more. The narrative remains witty and enjoyable, her random observations and comments amusing (ok, very amusing) yet she feels less real to us here, as though the jokes are intended to hide behind, allowing her to avoid giving us a more personal look. Fine, I suppose, but does this not defeat the purpose of a memoir? There is no coherent story here. Beginning with her childhood, the book wonders, finally just randomly ending as Fey runs out of things to say, suspended as it were on a motivational high where a moral (you can do it!) seems forced.

The messy nature of the book is somewhat disappointing, but Fey’s soaring voice and the very strength of her personality, even though deliberately muted somewhat here, still entertains readers and kept me laughing and intrigued throughout the drive. Bossypants is certainly worth a read, and the audio book edition as read by Fey herself imbues the author’s vibrant voice and attitude throughout all the words and sections. While Bossypants has its issues, Fey fans and audiences seeking some amusement will find the memoir enjoyable and worth reading.