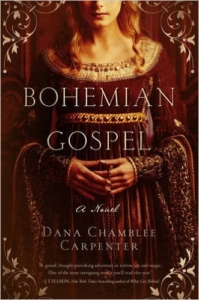 Game of Thrones Like Intrigue Blending with Dark Fantasy and Magic

Dana Chamblee Carpenter’s eerie debut novel, Bohemian Gospel, inspires readers with a mix of historical fiction, fantasy, thwarted romance, and spiritual horror. Set in 13th century Bohemia, an orphan girl raised in a monastery exhibits inexplicable powers and is feared by all the nuns, yet loved by the devoted Father Lucas. Cast aside by family and church, the nameless girl blends into the background, earning the nickname Mouse. Soulless, hopelessly contaminated by inexplicable evil, Mouse maintains a bleak and hopeless life plagued with mystery and the desire to do something, anything, to while away the hours of forced isolation.

It seems that Mouse’s chance of escape (or escapism) is answered when the disputed young king of Bohemia, Ottakar, barely escapes an assassination plot and, more dead than alive, is brought to the monastery. Knowing that the king is beyond their help, the terrified priests and nuns give Mouse full range in her healing powers and soon Ottakar claims her for his retinue as a personal physician and something more than a friend. However, Mouse’s growing awareness of her deepening powers and the haunting of demonic child-like beings leave all those around her in danger of torture and possible damnation. Bolstered by Father Lucas whose strange journeys enable him to gather restricted, sacrilegious tomes, Mouse seeks answers in everything from the Book of Enoch to ancient, coded spells. Her familiar in blood rites and teacher of casting, Father Lucas’ double life could destroy him in the church, yet his mystical knowledge and love of Mouse are her only hope of escaping persecution from both her own world and a far more terrifying one that is reaching out to her.

Meanwhile, political tensions in Bohemia entrap Mouse in courtly intrigue. Assassination schemes and rites of succession demand betrayal and sacrifice. Pitted against his own weakness and a father determined to steal the throne, Ottakar seems helpless without Mouse’s interference and her understanding.  As the stakes escalate, the volatile world, in a very Game of Thrones like twist becomes a mixing pot of intrigue, scandal, plots, and power struggles. In the end Mouse must decide between love and duty, pointless morality and desperate politics, salvation of self and protection of a realm, social standards and the truth of her own nature. Will Mouse be the hero, the villain, or something else?

A complicated work blending multiple genres, writing a summary of Bohemian Gospel is beyond challenging. Balancing the more extreme aspects of demons and spells with the acute knowledge of 13th century politics and family-wide betrayal, this historical/fantasy novel immerses itself in a unique, unrepeatable atmosphere. Jostled between high tension, high stakes sequences and the internal requiem of a perplexed and beset character, great storytelling weaves the familiar everyday world, history, and dark fantasy into a compelling, volatile sequence.

The tale begins with Mouse and her supernatural capabilities, eventually resulting in an unanticipated (and very much unwanted) resurrection. The vastness of Mouse’s power, including her ability to essentially speak desires into reality, presents a staggering problem only outweighed by her stoic Catholic background. Recognizing her abilities as inherently evil, our heroine deliberately hobbles herself, lending credence to the misfortunes (and mistreatments) she encounters throughout the story.

Beset by demons and forced to confront Enoch’s children, Mouse’s story diverges into castle politics and betrayals, hints of her darker knowledge (and duties) occasionally shining through, even haunting her at times. On their own, the inner workings of Bohemia, and Carptener’s portrayal of them, are inciting and addictive, reminiscent of that oh-so-popular George R.R. Martin style (not so subtly mentioned by me earlier). However, the lack of blending between Mouse’s supernatural story and her court story, both of which are given big chunks of the book but not woven together into the seamless tapestry of a unique and unforgettable life, makes readers desperate to see Mouse answer her call of duty (or at least acknowledge it) and the sinuous threads that lead into her hidden past. Mouse, however, is so compelling regardless of her role, that we are soon discarding the world of Father Lucas to bathe in the intrigue and follow Mouse’s personal development as she finally is allowed to interact with, and become attached to, others. That doesn’t mean that we don’t have questions, and even get annoyed at parts of the book where things like a simple journey to find Father Lucas or the defense of a dangerous supernatural portal becomes a vague impossibility or utterly unimportant. But the verve and pull of character and the elegance of atmosphere enable us to forgive even the grand flaws. We don’t care. The story is that good. Mouse is just that compelling.

Mouse is evocative and empathetic because she can and will think and is open to fighting against all odds in pursuance of her own defined form of right. She’s vulnerable emotionally, but ultimately strong in her unceasing course and unfulfilled desire for acknowledgment from God and salvation. While there are moments where she falters, moments where she doubts, her consistency of character and strength-through-the-pain motif, plus the fact that we see her down and out, ugly and pretty, exultant and devastated, insists upon strong reader attachment. Combine with this all the wonderful elements of this strange book, and you have a winner . . .despite the chunk-of-story pacing.

But then, there is the sudden devastation of an accelerated conclusion, a disappointing mélange that skips across time and destroys our heroine’s known personality with two out-of-character losses of strength. We ultimately know that this is because of the ambitious nature of the novel itself, which is hard to pin down and we, as devoted readers spellbound by this enchanting world and the vividness of Mouse, sweep the ending under the carpet and pretend, with odd ease, that it never happened. Both the Ottakar court story and the where-did-Mouse come from tale were bigger than the conclusion could handle. Specifically, the sequence with Mouse and the Vulgate Bible, is a sudden dip into what amounts to extreme sacrilege in a tale that very carefully managed to balance two diverse worlds and make us somehow accept both. Luckily, this shameless grab for sensationalism was so brief that it can be quickly forgotten and expunged from our memory. Despite the pitfalls of crafting something so different, the strange, dark magic of Bohemian Gospel captivates to such a degree that we don’t care about its faults. We’re just happy to have been on the voyage, to have experienced such a visceral, emotionally complex world. Already, I’m haunting Amazon, clicking on Carpenter’s name, waiting for her next book and thinking how marvelous it would be if she wrote more about Mouse.