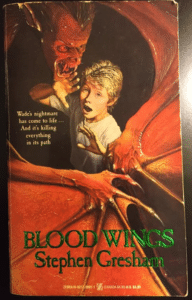 Working my way through that eBay assorted horror book box, a ratty old paperback with a mulleted blond kid and a lurid B-monster complete with blood red wings embracing its posed prey captured my attention. The equally ridiculous title, in shiny green print, entitled Blood Wings was more than enough to captivate my campy side. The 80s fanfare for surprisingly good, albeit silly horror movies (my all-time favorite The Lost Boys comes to mind) had me secretly holding out high hopes for Blood Wings. However, the majestic nightmare creature itself wasn’t the one to slay my hopes and leave them in bloody tattered heaps. Long before the bloated Blood Wings makes his lazy appearance, the simple, plodding writing, lamentably stereotyped characters, and low-energy dialogue had me in a torpor.

With little to no information available, even on the Internet, and a back-cover blurb that just gets the plot and gist of the story plain wrong, I didn’t really know where Blood Wings was going. That was all right of course, because I soon realized it was going nowhere. It starts with two smart alecky kids from the typical broken trailer-park flavored home, roaming unsupervised and causing mischief to prove their badassness. Eventually, this leads to theft of a boat, encounter of a creature, and the remaining survivor, our cardboard hero Wade, devoid of memory of the incident. Revealing nightmares and a selective ghost, who conveniently disappears from the tale, eventually lead Wade to remember and try to warn his community.

The community, including a dead-beat mom hiding from her abusive ex-husband, is predictable in their lack of concern and Wade becomes the kooky kid with an overly active imagination. The mom flings herself into an on-again-off-again relationship out of rebellion, the younger siblings try to prove that no, they are not dorky, and a corrupt Mayor decides to sell Wade’s outlandish story to attract a bigger community (tourism akin to the Loch Ness Monster, but with a redneck feel).

Wade knows the truth and soon mom’s druggy boyfriend and an old, foul mounted hermit in the swamp do too. There are a lot of motives to kill the creature: money, fame, vengeance, fear and the book follows each character around as they apathetically battle their inner demons to determine what is right. To make the moral decision even more overt, a scientist in the supernatural appears and talks of the majesty of Blood Wings and the necessity for its violence as a counterbalance to good (getting us into that whole how do you define light without darkness argument which has so been done). The scientist wants to save the beast but Blood Wings, tired of its swamp home being invaded, has other ideas . . . and thus there is the typical killing spree from the half bat half man creature of the swamps.

Now, of course, it’s up to the kids to save the day and the dumb adults and then everyone can learn their lesson, be conflicted about Blood Wings’ ultimate death, and discuss philosophy in fake Florida drawls. Essentially, everything you’ve never wanted to read about combined helpfully into one book which you can really enjoy throwing away (or, you know, burning).

As if the story wasn’t hopeless enough the writing is just . . . indescribable. But why should I tell you when I can show you:

Tomorrow, he reasoned, this entire episode would begin to become only a memory, and the summer would spread before him like the vast, blue-grey expanse of the Ocean. Things would get back to normal as long as Blood Wings remained deep in the swamp.

Hope Lark has something else to eat.

He wondered where she would go from Orchid Springs – off to find the abominable snowman or a sea serpent? Sounded like fun unless . . . Suddenly the image of the creature bearing down upon Timmy seized his thoughts. No, what she did could be dangerous. Very dangerous.

And what about Houston?

He and mom gonna get married?

The panoply of questions dizzied Wade. Life was confusing.

Except when you were hungry. Then life became bugshit simple (342).

Follow up that . . . unique . . . take on Southern white-trash valor with the nonsensical reactions of “characters” who are merely moved about to make the slow story inch along, and you have a read that is too campy to actually be fun. Blood Wings is just bad from start to finish. It’s never scary, titillating, emotionally appealing, or even poorly executed enough to be a laugh. This is the book time and the Internet forgot for a reason. Have a glance at the lurid cover for a nostalgic chuckle and homage to bad 80s monster stories, and then just move along. Nothing to see, or read, here folks.