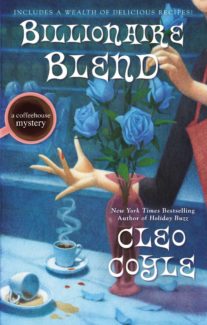 It’s an explosive summer at The Blend – literarily. A car bomb, targeted to wipeout frequent customer and ultra-successful technology mogul, Eric Thorner, tears apart the vintage coffee house instead; only Claire’s quick thinking and risky actions save the techie boy genius. Now Thorner, beaming gratitude and romantic intentions, sets Claire up for a wild ride through the world of big money, phone apps, and some corporate espionage. Along the way, Claire teams with Thorner’s company to create the world’s most decadent – and expensive – coffee sold only through their exclusive new phone app.

Meanwhile, Claire’s absentee boyfriend, NYPD detective Mike Quinn, remains suspicious of Thorner’s intentions, both toward his girlfriend and across his company. Is Thorner really the target of a would-be murderer with some tech savvy? If so – why? Is Claire safe to get closer, especially with the body count steadily mounting? Has the true killer been hiding in plain sight the entire time?

Book 13 in the long-running husband and wife penned Coffeehouse Mystery series introduces us to a vibrant New York decked out, as usual, with the rich and famous. While the series has always liked its smatterings of the high-life, the stakes are more than just upped here. They fall into a completely new universe populated by kid billionaires flush off phone games (such as Pigeon Droppings) and smart houses linked to fancy cell phones that talk to you.  It’s a new game in an old-fashioned, high life world where decadent food and dripping diamonds are no longer the standards of visible affluence. Now – the biz at the buzz is in techie speak and Coyle just might be taking us too far down the rabbit hole. 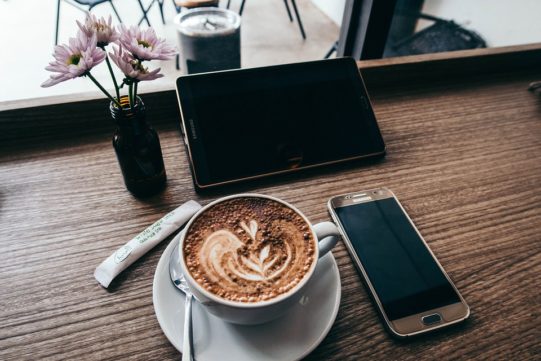 Thorner, boy genius, apparent womanizer, schmoozer who made it big first with his phone apps, now wants to up the stakes and step into the word of the nouveau riche with holograms  and apps that help you locate the most expensive goodies. Floating in this world, where the phones are more articulate than you are, Coyle distances us from the reality of the series. Perhaps I’m just a troglodyte who still loves her printed books (ironic since I too have succumbed and work in tech), but the Apple-worship-like focus didn’t appeal to me as much. I was ready to leave the hip-and-with-it startup gone gangbusters overnight and slip back into Claire’s previous world where the exorbitant wealth and gadgets that went with it were at least backburner to the simmering plot and the dark desires that breed murder.

Of course, maybe I am also a little peeved because Holiday Buzz  ended with an unspoken promise: a resolution in the will-they won’t-they Quinn and Claire conundrum: the couple will either reconcile and marry or tearfully split for good. The situation had gone too far for anything else, yet here we are again with the angst at the same level yet the necessity of solving it suddenly seems dialed down. The author is playing with the reader, drawing out the cliffhanger, and while there are a few overdue revelations about Quinn’s new position, we leave in much the same place as before: stranded on a precipice, the characters playing along the edges, oblivious.

The final killer revelation unwinds almost placidly, with the main villain action confessed off screen. We know what happened, we know who, but its surreal, an afterthought to Claire and Mike’s relationship. The Blend becomes strangely uninvolved as months go by with the search for the perp continuing and the final finding and bringing to justice smacks of an addendum. Not exactly the emotional and intellectual pay-off we usually have in Claire’s fraught adventures.

There are a few kitchy elements too, namely a love story where Claire and her ex play cupid, pulling an utterly ludicrous and mostly vicious prank. That’s not to say that Billionaire Blend is bad – far from it, especially for a cozy mystery. Actual detecting, action, danger, plot twists, and cozy abound. But, the series has seen stronger stories. The magic is more diluted here, the slow pace catching up with the plot just enough to showcase where it struggles or embellishes too much. Still, the Blend remains a storyteller’s den, the characters a welcome family, the tang of fresh grounds unfurling through the pages. There is nothing to forgive yet – but we are ready to see the pace escalate and the phone games die down.