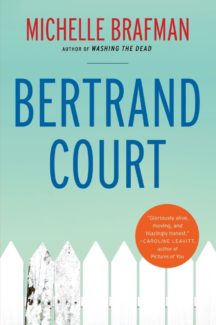 Centered around an up-scale and seemingly benign Washington, DC neighborhood, Bertrand Court takes a look at the complicated roots that bind lives and communities in both ephemeral and poignant ways. Some of the connections are nascent – lives that whisper and glide next to each other, perhaps just over the white picket fence, and some of them are all encompassing, allowing for viewpoints and sides and endless complications – heartbreak and hope, different sides of the same ever spinning coin. Each story has the timeless quality of real life – a moment stolen here and there with fractured characters, most of whom carry regret, heartache, longing, and reminiscence.

Comprised of 17 short stories, albeit marketed as a loose “novel,” Bertrand Court is a snapshot, a taste of life with a literary punch. The stories differ as do the individuals, but the theme is mostly one of loss: lost children, lost marriages, lost lovers, lost youth, lost status. With all this grief, Bertrand Court is a strange, retrospective mélange. It’s a collection of stories centered around gradual epicenters of slow realization – the everyday evolution of dreams further from being realized.

A further evolution of the author’s heartbreaking short story collection, previously published as We Named Them All, the first several stories of Bertrand Court are focused on Hannah and her husband as their marriage deconstructs in a series of rending still-births that leave Hannah raw with emotion and teetering at the edge of a nervous breakdown (she even carries a baggie of jam that reminds her of the remains of one stillborn child, as though in this way she can somehow keep her baby.) It’s difficult to say that these stories were my favorite in the compilation – or even the most relatable. Fortunately, I have no experience with such devastation and the word favorite smacks of joy and vicarious sensationalism. These stories, alternating between the perspective of Hannah, her husband, a pregnant friend, and even one of the unborn children, rip away the strictures of fiction. Yes the language is still mellifluous, the writing elegant, but the emotions here scream from the page. Readers will feel these stories in a visceral way. You’ll go from thinking “Oh my God, that could be me,” to fearing that someday, perhaps even now, it will be you.

Hannah’s stories and the brave bearing of a very private kind of grief is what makes Bertrand Court stand out as exceptional. The stories that follow, while just as worthy of the “great writing” award, however, pale after such a gut punch. Hannah and her children, described as grisly miscarriages and emotional voids that destroy marriages and even family relationships (the family heirloom and its symbolism will leave you shaken), are replaced by the everyday. We have wives who married for status and now are losing it. Husbands who are losing jobs. Husbands and wives who are unfaithful or at the very least flirting with the danger inherent in risking a relationship that has more or less moored their lives. Along the way we have lonely outsiders, desperate to be welcomed into an all Jewish family. We have holy ceremonies and boozey confessions at girls’ nights. These stories are relatable in their regrets and in their fond memories of a youth that probably wasn’t all that they remember or romanticize. Yet after the starkness of death, infertility, stillbirth, they have the ability of moving us less.

Readers seeking a novel or the traditional “beginning, crises, resolution” sweep of plot have made their complaints and review after review states “confused!” and “where was the ending!?” Admittedly, while novels are my true love and endless addiction, not every literary work should read like a novel, especially a linked short story collection (which is what Bertrand Court undoubtedly is). The stories are focused on emotion – loss, longing, and nostalgia. There is no beginning because we’re in medias reis (i.e. we’ve been thrown into the middle of things) and like real life, situations, especially emotions, do not have resolutions, at least not ones that can neatly be tied up in a bow and delivered within an acceptable time from the initial crises.

The stories sometimes speak to each other and reoccurring characters will appear, even commenting on each other and events we already have the insider low-down on, but Bertrand Court isn’t trying to get anywhere. It’s there to give you a gift – a sometimes brutal, sometimes loving look with the veil drawn back at a collection of people, their lives, their regrets, their mistakes, and the forgiveness they need. As a reader, some characters won’t inspire you to forgive whereas others will shred your very soul (yes, I’m back to Hannah again). In the conclusion, Bertrand Court is a snapshot of the emotional complication that surrounds us, everyone we know, and everyone we don’t know.