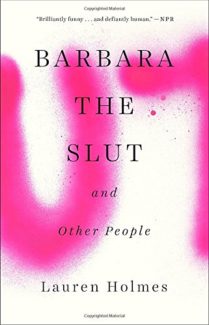 Barbara The Slut – And the Underbelly of a Sad Society

Advertised as edgy and raw with the capability to peel back the layers on the most complicated, and torn female anti-heroes, Barbara the Slut first captured my eye when it was featured as a Book of the Month pick. Zany with a hint of desperation and a sweeping undercurrent of depression, stories range from a gay teenager trying to come out to her absentee mom, a whiny tween attempting to break-up with an overzealous boyfriend, a frantic foreigner discovering he’s contracted AIDS from a prostitute, a rebellious woman with a job at a sex shop, a couple’s dog who watches the effects of cheating, and of course Barbara, who is indeed a slut. The attitude is a gritty “here you are” staged in the underbelly of human emotion, brutal honesty, and no-holds-barred millennial psycho-social/sexual self-indulgence.

Encompassing ten stories, the collection kicks off with a languid air and that annoying I’m-so-literary-and-smart-I’m-not-even-going-to-tell-you-the-story-ending-or-hint-at-a-purpose. The first two short stories How Am I Supposed to Talk to You (lesbian tries to determine if it’s even worth the effort of coming out to her mom) and Weekend With Beth, Kelly, Muscle, and Pammy (I honestly cannot even remember the basic premise of this one) were vague and unappealing in that meandering, self-conscious way stories that think they’re better than they are tend to be. After that, the stories start to become clearer if not more purposeful. In Mike Anonymous some workers at a sex clinic have to tell a foreign man who cannot speak English that he has AIDs and deal with the already-in-the-know prostitute he later brings. It’s bleak, hopeless, interesting in the way of all sad disasters, and ultimately ends without having made a point – unless that point is mere fatalism, in which case it epically wins.

I Will Crawl to Raleigh If I Have To picks up mid-story as a teen (or tween, I likewise cannot remember) prepares to stop by her boyfriend’s house on the way to a road trip vacation to break it off. The reason: he loves her too much and is ultimately too good to her. The real reason: she wanted to be in a relationship just to be in one and didn’t seem to understand the human interaction component that comes with it – or the fact that this guy just isn’t right for her. Relatable: sadly, yes. Most of us will flash back to our own whiny teenage days and feel pangs of uncomfortable self-loathing. Hopefully while most of the audience has moved beyond the blatant, unthinking self-centeredness, the regression of the admittedly well captured narrative isn’t an enjoyable literary experience. It just leaves us forlorn, again, because the world can be bloody vicious sometimes – you know, in case you’d forgotten.

Some of the more mundane, or at least not-quite-there stories, are outweighed by some of the more biting ones. In Pearl And the Swiss Guy Fall In Love a one-night stand turns into instant love which turns into moving in (later the same day) which turns into a slow story of torture. The only funny story in the collection, the dark humor of infatuation sliding into slow repugnance highlighted by a bizarre lodger and the patently annoying habits of a post-crush are tongue-and-cheek. It’s still brutal in a here’s how we let each other down way, yet readers will feel an uncomfortable connection that is both amusing and a bit of a downer. Still, good story.

In My Humans, my personal favorite story in the collection, a new girlfriend forces her distinctly anti-animal boyfriend to get a dog. The boyfriend goes from disliking the dog (he thinks it’s disgusting) to slowly and surely bonding. Along the way, the dog witnesses what is obviously cheating as the girlfriend, stuck on an old lover, leaves her paramour alone with the unwanted canine. The way smell is used here to signify trust and the ways it can be eroding, the way betrayal etches itself on the skin, is highly effecting and darkly inspired. And yes, depressing. This is the story that keeps echoing back in my mind, at least its sadness which is more effecting than the agony portrayed for its own “artistic” sake. Thanks to the bond between man and animal, there’s even a little hope.

The final story in the compilation, Barbara the Slut, follows a brilliant high school student who despite all her promise and intelligence is shunned for her sex rules – i.e. that she only sleeps with someone one time (and is therefore, always moving onward to a new conquest.) I’m not sure what the story is trying to say (other than the obvious “stop slut shaming”) but there is something else here, distinctly. There’s more of a soft humanity here and a desire for sympathy with those whom we don’t understand or whom we perceive to be flawed. We don’t get an explanation really for Barbara’s rules or ways and despite her stranger behavior, something about her fragility and loneliness is oddly appealing and makes readers want to get protective. Oh, and in case you hadn’t already guessed – it’s depressing.

So, oddly Barbara the Slut, Lauren Holmes take on a gritty post-millennial world of ambiguous morals and overflowing sadness is, like many of its stories, a liminal piece. Readers hover between feeling apathetic and loving it at times, while still being tempted to do just that which Holmes is trying to get us to stop – judging. And yeah, it’s hard not to judge because the very grittiness makes all this feel somehow unreal or hyperreal. It’s the frank artistic depiction of spaced out, liberal characters whose agonizing blankness is perhaps overdone but at least recognizable as something more universal and ultimately deeper. I guess what I’m saying is, if you have the bandwidth, give it a read. If you’re short on time or not a fast reader (or one who likes feeling particularly hopeless about humanity) probably best to keep on moving. A quirky compilation that even I, in my own mind, can’t truly decide if I liked or not. If I had to pin it down, I suppose I’m coming down more on the like side, despite my list of “hey, this is overdone” or “enough of that literary hyped-up blankness already, we get it you’re depressed but not introspective and therefore unaware of said depression even though we readers totally are.” So, recommended I guess.