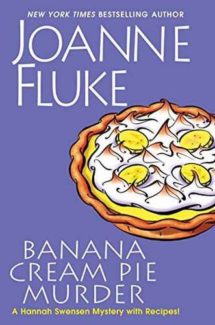 Marriage really starts when the honeymoon is over, and Hannah isn’t fated to have much of a honeymoon. A week-long cruise in stifling proximity to her new spouse has a dramatic end when murder calls Hannah back to the festering hotbed of lies and deception quaintly known as Lake Eden. It seems that Mayor Bascomb’s talented sister, leader of all local plays, has been viciously murdered in her own condo. The grisliest aspect – Hannah’s mother heard the fatal gunshot and discovered the body, and now intends to fully participate in the investigation.

Home at last to new schedules, new routines, a surprise present of new furniture, and a panicking mother with an itch to investigate, Hannah has her hands truly full.  Was the lecherous Mayor Bascomb himself responsible for the murder? Or perhaps the rouge accountant? The mysterious love interest with the gaudy shoes? Or of course, the ever-reliable mystery suspect with the unknown motive? It’s time for Hannah and hubby to take up the cross of murder most foul and bring a killer to justice – but will that put a fatal strain on this new marriage?

Let’s be honest here. The series has been slipping for quite awhile with a brief resurgence of the old cozy in Christmas Caramel Murder which went back in time before Ross and the entire Mike/Norman bro-mance. Between the ridiculously competitive albeit disgustingly good natured harem of Hannah’s paramours to the sudden and inexplicable marriage to a basically anonymous third party, the series has taken playing with reality to a whole new level – even by the fairly lenient cozy standards.  Meanwhile, the entire homespun atmosphere has taken the milk-and-cookies goodness to an unbelievable level of, well, sheer dumbness.

Conversations typically spiral off around “who first named sugar, sugar Hannah” to “words that Tracy would not say,” to vapid conversations about the minutia of daily life. Investigation: nill. Filler: 110%. Banana Cream Pie Murder is just another victim to this long running trend of sloppy writing and page filler.

Where to start? It’s been a long time since Hannah’s murder book had some real action. Investigating takes such a back seat to everything else, including some weird “after marriage” thoughts on Hannah’s part (more on that later.) Here, the investigation is essentially some talk over dinner at the end and one breaking-and-entry chapter where the characters search around the vic’s belongings to learn something quite surprising . . . which never comes to anything. Most of the time it’s baking, inane conversations, and Hannah’s awakening from teen-crush to “huh, I’m actually married to this stranger now.” Needless to say, the mostly new player in the Lake Eden shows is the obvious choice for murderer, and the typical Hannah in-danger last minute rescue chapter produces the expected confession from the killer. Cut-and-paste, you have the ending for the last fifteen odd books.

And here, let me go on about Hannah’s actual marriage and of course, the “cliff-hanger” ending that leaves readers with some hope that this Ross dude is just gone. The honeymoon begins with a chord that sets all our alarm bells ringing and makes us just plain angry with Hannah, who is supposedly an adult woman in her 30s and, thereby, should have some basic understanding of how the world works. Basic is the key term here. Instead, we have a seven day honeymoon on board a ship where Hannah feels confined and strange, constantly stuck with this new plot device (umm, sorry, man is what I meant to say.) She’s stifled by his attention and all the good, normal things he does and longs for her alone time again, which just let’s us know right upfront that this marriage is what we always suspected – a huge mistake. Hannah’s no more in love with Ross than we are with their insipid and last minute mostly off-screen romance.

The narrative continues with Hannah acting like a teenager, upset at every time Ross is late home or doesn’t consult her. The twist, is of course, that despite being able to solve murder Hannah is still incapable of checking voice messages on her phone, and we get the usual lecture about that “new fangled technology.” Meanwhile, as the drama continues it comes out that Hannah knows nothing about Ross and the couple hasn’t talked about anything. She doesn’t know if he wants children (holy &#$%*# woman!) or any of the other major life decision items that you should talk about before getting married. It’s little surprise that this new “romance” in Hannah’s life is not satisfying readers, because its evident that the author is struggling to deliver a feel-good moment that the characters are just not emotionally ready for (or mature enough to handle for that matter.) It’s all a shambles, although luckily (and here I am using sarcasm) Mike and Norman are still Hannah’s best ever friends and rescuers, so there’s no true sense of consequence in this world. Sigh.

Banana Cream Pie Murder kills the seed of hope regenerated by Christmas Carmel Murder and validates that this nose-dive trend is the death throws of a once upon a time, long-ago, good cozy mystery series.