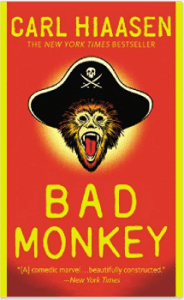 In a tongue-and-cheek homage to dark sarcasm, voodoo, and the shady world of real estate marketing, Bad Monkey is another epically deranged, yet brilliant jaunt through the insanely hilarious mind of Carl Hiaasen. Enhanced with an ex-police officer (Yancy) hero now slotted to roach-patrol (i.e. restaurant inspector) after assaulting the husband of his paramour with sodomy via-vacuum cleaner, the story just gets that much weirder when a severed arm, proudly sporting a rude gesture, is hauled aboard a local fisher. By the dent of general police ineptitude and the very strangeness that defines everything Hiaasen, the severed limb causes the disenchanted Yancy to sense that something is more than a little fishy in this supposedly open-and-shut case of a missing husband and a motor-boat accident. If only Yancy can regain the respect of the sheriff this might be his chance to leave the greasy world of restaurant purveying, and his subsequent weight-loss, far behind.

Meanwhile, trouble is brewing in the Bahamas when the local, Neville, rebels against building contractors and consults the island’s voodoo priestess, the Dragon Queen, for a way to rid the island of the annoying new white man builder who is destroying Neville’s land. Similar to Yancy’s own quest to thwart the building project which blocks his view of the sunrise and mini-deer, Neville has to take matters into his own hands, and there is much sabotage as the two stories slowly wind toward each other.

As Yancy struggles to fit together the pieces of the mystery (much like the stunning widow who arrives to pick up her husband’s arm from Yancy’s deep freezer), woman trouble looms when the ex-lover of the man he assaulted shows up with a surprising revelation about her past and a disturbed coroner puts the moves on a newly single Yancy.

With all the deft nature 0f Hiaasen’s wit and clever writing, Bad Monkey will have readers chuckling and cringing. Not nearly as disturbing as Tourist Season, where we get an entire body shoved into a suitcase and a group of blood-thirsty terrorists, Bad Monkey certainly isn’t afraid to veer into the sad, the perverted, and (thinking of the coroner here) the plain bizarre. As Yancy reaches around a severed arm daily to free his frozen meals, readers pretty much know that we are in for another crazy ride, another strange spell in an alternate universe which takes absurdist situational humor to a whole new level.

The characters are likable, if a little out-there, and the narrative has a certain flow, a mixture between plain good writing and a sense of devilish irony that Hiaasen fans (even we relative newbies) have come to love and appreciate. Between the roach patrol, bizarre ex-girlfriends (and current girlfriends), voodoo, and some epic property destruction, the novel keeps up a steady pace. But, as they say, it’s all fun and games until someone loses an arm – then it becomes a dark mystery!

With the same level of creativeness (and cleverness) that lead Hiaasen to create Skinny Dip (my personal favorite so far), Bad Monkey isn’t all about a laugh. The mystery itself and Yancy’s sleuthing are just as strong and steady as a hard-boiled mystery just, you know, weirder. The final reveal is hardly the end, and the twists are both amusing and tense. It’s an edge-of-the-seat kind of ride and a crazy train that we don’t actually want to leave. We’re on it all the way to the jolting, gory end as a matter of fact, because somehow, this bizarre world just calls to us. It’s the same sort of dark humor that makes Archer so great, threaded in with surprisingly fleshed out plot and, my favorite, sharks.

The side stories and characters are more than amusing and the actual monkey (you knew that I had to get to that, didn’t you) is a memorable catalyst for some cringe-worthy sequences and finally, a little bit of light hearted all’s-temporarily-well-with-the-world ending (until the next body part is fished out of those Florida currents anyway.)

Capitalizing on place as he does, everything strange about Florida and its quirky inhabitants continues to make Hiaasen a local celebrity and a national, critical success. The man has talent, and verve, and humor, his works are just uniquely him. Another favorite.

*A Note on Edition: I listened to the audio book verse performed by Arte Johnson. The audio book was well narrated with an expressive reading style yet the narrator’s voice, specifically his heavy accent (New York, Boston, something mid-western?) detracts from the tale and grates on the reader’s nerves. It’s not a Florida accent or a southern accent, so it especially does not make sense in relation to this story. Just… why?