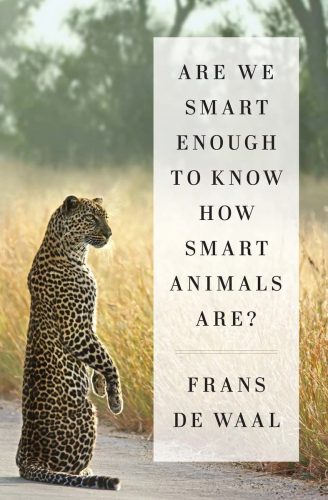 I picked up Are We Smart Enough to Know How Smart Animals Are? from an Audible deal. I usually immerse myself in fiction, but I also have an intense passion for all things animal related, including animal welfare and understanding the complex emotions and intelligence that anyone close to animals can easily observe. I was excited to start this book, to hear science backup what animal lovers have known for a long time. I was also looking forward to the deep dive stories of scientists working with and discovering the intelligence of specific animals. I was largely disappointed.

Frans de Waal is intelligent and an expert in his field, but he’s not the world’s greatest writer. Are We Smart Enough plods on in fits and starts, dropping threads and then redoubling on the same idea, the same experiment, the same anecdote in a seemingly haphazard fashion. There is no throughline of logical organization, no carefully structured argument, just interrelated diatribes about different approaches to animal study, how they have evolved over time, and how scientists from one discipline or another (behaviorist vs the new animal cognitive experts) don’t get along. It’s not easy to follow the threads here, and most of the time it is more self-aggrandizing (i.e. why I chose this approach) than actually interesting to those of us out there who aren’t scientists but find science fascinating.

As far as our animal anecdotes, you can likewise forget those. Only a few stories surface, and those same stories are used again and again. The animals, despite the title, are never the star of this show. Are We Smart Enough soon devolves into a bickerfest between competing approaches.

Not to say that Are We Smart Enough to Know How Smart Animals Are? is a worthless book. There are some interesting facts in here, largely showing that the intelligence gap is on the human side and not with the animals. Many of the experiments are a “one size fits all” motif, gathering skewed results that don’t really show animal intelligence. We build tests that animals cannot do because of their size, their body structure, etc. and then consider them unintelligent compared to other animals. It’s a sliding and impossible metric. But again Waal belabors the point, and what is interesting soon becomes repetitive, said a thousand different ways in a slurry of chapters that don’t really talk to each other, but read more like a stream of conscious rant from someone who is passionate but woefully disorganized.

As a side note, there is also a substantial reliance on evolution, and for the Creationists among us, this is tedious although not unexpected.

Overall, I came to this book expecting that logical, scientific flow, that argument building and steady arrangement alongside stories of specific animal test subjects and their interactions with scientists. Instead, I got a mildly interesting but vastly disorganized history of an evolving discipline, a very sparse amount of repeated animal anecdotes, and some terminally repetitive writing and organization. Not horrible, but certainly not all it could have been.