Anne of the Island 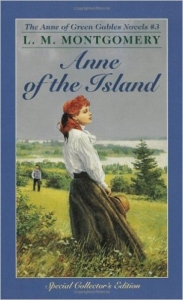 Returning to the world of Anne Shirley, fiery haired orphan who stole our hearts with her imagination and positive nature in Anne of Green Gables, Anne of the Island follows college adventures, whims of romance, newfound friendship, cozy nesting, and the dreamy nature of teen love in true L.M. Montgomery style. Anne is now well into womanhood yet the advances of the dashing Gilbert Blythe are still repellent to our young at heart, ever a child heroine who visualizes romance as an exercise in being swept off her feet instead of the ho-hum aura of marrying a childhood enemy turned teen friend. Preparing for the exciting tumult of college and newfound comrades, Anne’s growing up is both cozy and painful, her own yearnings suppressed by the blindness of youth and the semi-melancholy aspect of “there’s still time.”

Having re-awakened my love for reading during my early teen (and ok, pre-teen years) with Anne’s adventures, a whiff of nostalgia and a desire for that certain sweet something only L.M. Montgomery can pen has had me returning to old favorites. Of course, more than ten years later some of the romance seems, well, a trifle silly, yet the homespun nature of the tale and Montgomery’s elegant descriptions of the vibrant beauty of nature had me curled under a quilt, sipping coffee by an open window and giving myself over to the literary magic that is Anne’s daily world.

Of course, even as a teen, Anne was never my favorite L.M. character, despite her near universal appeal. I preferred the dark-haired Emily in Emily of New Moon with her more serious, adult nature and her solemn adventures. Other favorites were short stories of thwarted love, woe, and the traditional anti-climatic suicide for the want of love (check-out Montgomery’s short story collection By the Shore). My dubious maturity at the time, easily evinced by the unhealthy love of tragic love stories with tints of death, leaves much to be desired and sends a bit of a shiver down my spine now.

Yet, even at the age of an impressionable 13 progressing through Anne of Avonlea and then Anne of the Island, Anne’s childishness seemed unrealistic, perhaps even concerning in an adult woman. Anne remains in a distinctly younger persona with an “eww boys, cooties” type of air, even though clearly Gilbert is intended for Anne by our starry-eyed author. Around her, Anne’s friends find love and progress toward marriage while she herself remains oddly disinterested. She has deep feelings for her female friends (described in flowery detail) but the men that L.M.’s romances are all about come off more as last minute love add-ins and this makes Anne’s apathy even more pronounced. Her sudden shift in the conclusion feels even more forced and while my teenage self couldn’t pinpoint just where the issue is, my adult self feels that Anne, although touted as a young woman, is represented as the same self she was in Anne of Green Gables, including her childhood imaginary friends and her ability to see fairies and magic in the world. This was perfection in Anne’s first book, depicting a beautiful childhood infused with love and second chances. In later books as Anne grows older, it becomes discordant and annoying that her magical spirit does not develop along with her, but instead stays stuck in childhood.

That’s not to say that Anne of the Island isn’t an enjoyable read. This novel was my first experience of the pitfalls and the heights of college and gave me quite a few expectations for best friends and cozy houses. Anne reconnects with old friends and makes new friends at Redmond College while keeping her ardent love of Avonlea and her job on the restructuring committee. Together Anne and her merry girlfriends, all co-conspirators in gossip and romance, find the perfect cozy house to rent together and Anne experiences, quite joyously, her first home. Decorating and running the cozy little cottage that is Patty’s Place bonds the girls into stronger friendship and hints at the further joys of growing older. As a teenager it gave me many excited anticipations about all that waited for me both in college and beyond. Long finished with college (and grad school) now it gives me a soothing sense of priority and reminds me that home, family, and friends are the core elements in an often times distracting life. The kitties of Patty’s Place further my love of Anne’s cozy educational stint.

Of course, being L.M., someone must needs die of consumption and Anne experiences her first loss of a friend. It’s within this sequence that the childish Anne is replaced by a glimpse of the strong young woman she will become. Confronting real tragedy, Anne further realizes what is important in life and while this stint is a brief plot point, it’s one of the most memorable and effecting occurrences in the book.

Anne continues as semi-surrogate mother to Davy, the rather unfortunate plot addition in Anne of Avonlea. Fortunately, the Davy-isms are decreased here and while he continues to provide some forced comic amusement and shenanigans,Anne of the Island focuses more on Anne’s college days and plans for her future, including some ending chapters where resolution in the entire Anne/Gilbert triangle is finally reached.

Not my favorite in the Green Gables series, Anne of the Island still provides warmth and coziness and eclipses the mediocre nature of Anne of Avonlea. From here the transition is made and the serious swooning romance between Anne and Gilbert, plus the exciting challenges of adulthood in a homespun world, is furthered in the next edition, Anne of Windy Poplars. As a teen, Anne introduced me to books, imagination, and fledgling romance, As an adult, her adventures provide me with nostalgia and a sense of what really matters – that essential spark of magic in life that never fades.