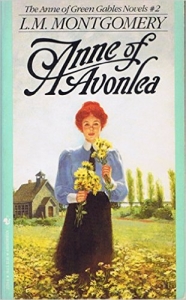 Returning to the magic realm of Green Gables and the novels that in one boring summer vacation transformed me into an excessive bookworm, I followed my reading of Anne of Green Gables with its sequel, Anne of Avonlea. Here, we follow Anne from sweet-sixteen to eighteen as she grows from an imaginative child into an idealistic and enthusiastic young woman. This is a quiet spot in Anne’s life in the series as she stays with foster mother Marilla abandoning college and settling down to teach school and keep the happy Cuthburt farm alive. Added into the mix two precocious orphans are inherited from relatives including the badly behaved but much loved Davy, a new pernicious old bachelor friend with a pesky parrot is made, a romantic old lady with a sad story and a house of echoes is introduced, and finally Anne and cohorts create a village improvement society. The narrative is slow paced, following the magic of an L.M. Montgomery world with the creation of beauty, hilarity, friendship, and the beginning sparks of romantic attachment. These transitional years will bring Anne into adulthood and at the conclusion, have her ready to leave the farm and once again pursue the college dream.

When I first read Anne of Avonlea as a teenager, voraciously in under a week, I was less enchanted with Anne’s transition to adulthood or, frankly, her lack thereof. I was around fourteen when I became a bookworm extraordinaire and spent what little allowance money I managed not to waste on tracking the Internet for rare L.M. Montgomery books. The series is still a staple in my life, thirteen years later, and has an honored place in my favorite bookshelf. Yet, I feel that my younger self was right – this just isn’t the best Anne adventure. Transitioning from a child, Anne is a rather silly, immature adult. Even at fourteen I thought this, and the inclusion of the elderly Miss Lavender, who indulges in continual games of pretend, irritated me. Magic and imagination I liked (and still, devotedly, do) but silliness – not so much. I already saw the hints of the potential relationship with Gilbert and was excited to follow Anne on her maturing adventures in the work world, in college, and in a relationship. I was annoyed then when she persisted in being a child and wondered – can adults really do this when they actually have jobs and responsibilities. Even at that age, it seemed to me like this would be a game changer.

And now, more than a decade later, re-returning to these books that just breathe enchantment, I still feel the same. Anne of Avonlea is a weak spot in the series. Not to say that it isn’t enjoyable, even necessary, to continuing adventures with Anne. It’s just not my favorite. The character seems stuck in a Neverland type of world which was cute as an impressionable child and unbelievable, dare I even say annoying, as a teenager/adult.

The introduction of Davy and Dora, Miss Lavender, and the Improvement Society take up the majority of this narrative. It didn’t help that none of them were my favorite side plots. Davy and Dora, orphans adopted by Marilla, seem to be thrown in as a recollection of Anne’s precocious youth (namely Davy) but here they just cannot compete with the charm of the fiery haired orphaned girl that originally drew us in. Miss Lavender is abominably silly. The Improvement Society is simply dull – I don’t care whose barn needs painting or where new trees need to be planted in Avonlea. It’s too mundane to have so much page space.

So there you have it – not L.M.’s best. Yet still, the charm and vivacity is here. The very aliveness of nature, the bloom and vigor of youth, the hope and anticipation of times to come, the inviolable goodness of the human spirit, still shine through and keep readers turning pages. The spell may be a little weaker than the first adventure, but the magic and the mystery is still strong. Reading through the pages turns back time to that one singularly beautiful liminal moment between hope and anticipation, the gap between childhood and adulthood that sings with so much promise. For this and for L.M.’s vibrant atmosphere, her world populated by lovable people and gorgeous scenery, readers remain faithful until the end. We will go on too, to follow Anne in her journeys in Anne of Windy Poplars.