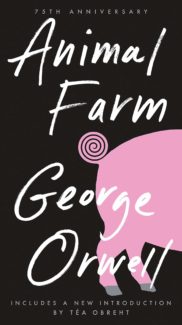 “All men are enemies. All animals are comrades.”

Animal Farm is a political fable about human nature, the ultimate corruption of idealism by power. It starts with Mr. Jones, the drunken farmer hated by the animals he mistreats and uses. As Jones sleeps off another hangover in his farmhouse, the animals begin to talk, and one old pig describes a dream – a dream where animals are their own masters, where their toil produces benefits they can reap, and where all animals are equal. Soon, two other pigs, Napoleon and Snowdrop, champion transforming the dream into a reality. Jones is ousted. Animal Farm begins.

As the story goes forward, the pigs take charge. Of course – they are the smartest of the animals. They can write, they can communicate, they originated the dream. But all animals are still equal. . . but some are, of course, more equal than others.

Under the pigs’ reign, the days of peace and plenty are wondrous, but brief. Soon, the pigs follow in the footsteps of their hated human masters, and the rules slowly change over time. Decadence and inequality seeps in. In-fighting and propaganda begins. Plenty becomes want and dissociation from all things human wanes as the pigs take over the farm house, discuss outside trade, and fight amongst themselves.

The parallels of Animal Farm and various empires and political systems are obvious, and the write-ups following Orwell’s background inspiration easy to find. The story is, of course, a warning, but I personally thought that it went deeper than a criticism of a political system. It gets to the heart of all human strife – that old adage that absolute power corrupts, absolutely. 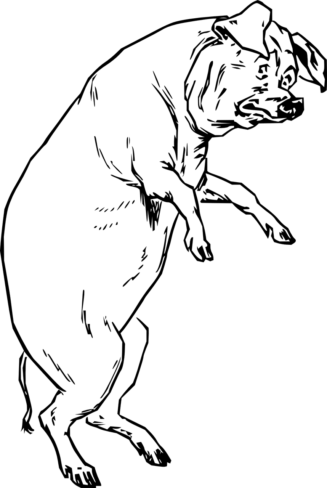 The story is brief, but the characters (the animals) are vivid. The pigs are eloquent and sneaky, literally using their intelligence to subjugated and brainwash the other animals. At first it is subtle, but then it becomes violent and oppressive. Rebellion foments and is squashed. All the while, the pigs transform. Squealer, the propaganda pig, slowly works his way among the other animals, easily gaslighting the simpler minded animals and threatening those who understand too much. He is, in a way, the most sinister of all the characters.

On the reverse side of the spectrum, there is Boxer, the dedicated horse with the strong belief that everything will get better if he only works harder and that faith in Napoleon (the lead pig) will result in a reward. His story is the most tragic. Boxer stands in for the fruitlessness of belief in a political ideal, especially a disproven one, but he also comes across as a strong character that demands empathy. His hopes and dreams are simple, but relatable and good natured. The ending of his story makes a point – Orwell is good at that – but it also tugs the heartstrings violently.

Animal Farm has everything. On the surface it is a good story – a fable with all the right elements. Underneath the surface, the point is still relevant. The monsters we hate are the ones we become once we have the power to do so. Tyranny lies in us all, as does disillusion and subjugation. We hear what we want to hear and believe what is easiest to get through the day. It’s a tale that comes all the way around at the end, brutal, memorable, and stunning. Everyone should read this.