A Crash Course on the World’s Biggest Library

A bookworm since my earliest memory, I used to dream of being a librarian; the feel of working surrounded by so many books – that special library air potent with dreams and old pages – should be enough to satisfy even the most hardened of souls. When I moved to Washington, DC then, I finally had the chance to see the largest library in the world, an institution which by its very creation has defined the library system in America and set a precedence for learning and a respect for the written work that has defined everything from an elaborate system of lending to protection for creative artists (not just authors!) embodied in copyright laws among other programs. Imagine then, if you will, when my lifelong dream through happenstance and a chance posting for a technical writer (alas, I never did become a librarian) became reality and I ended up working not just in any library but the one that started (and sustains) it a ll – the Library of Congress. Enter this book, America’s Library: The Story of the Library of Congress 1800-2000, which I purchased with my employee discount at the Library’s addictive bookshop. What better way to have a crash course about the glorious and austere halls I found myself wondering in?

America’s Library is a hefty tome in the shape of those glorious coffee table books that often get bought and rarely, if ever, read. This time, however, I wasn’t looking for something pretty to display but for a crash course to acquaint me with the Library of Congress and its 200+ years of fraught history. With full page pictures and glossy text, the artistic and expensive appearance of the book is an added bonus, but my main concern was some quick, peripheral learning with enough zest to captivate me and enough facts to give me an even footing with the already more knowledgeable tourists I found myself surrounded by. 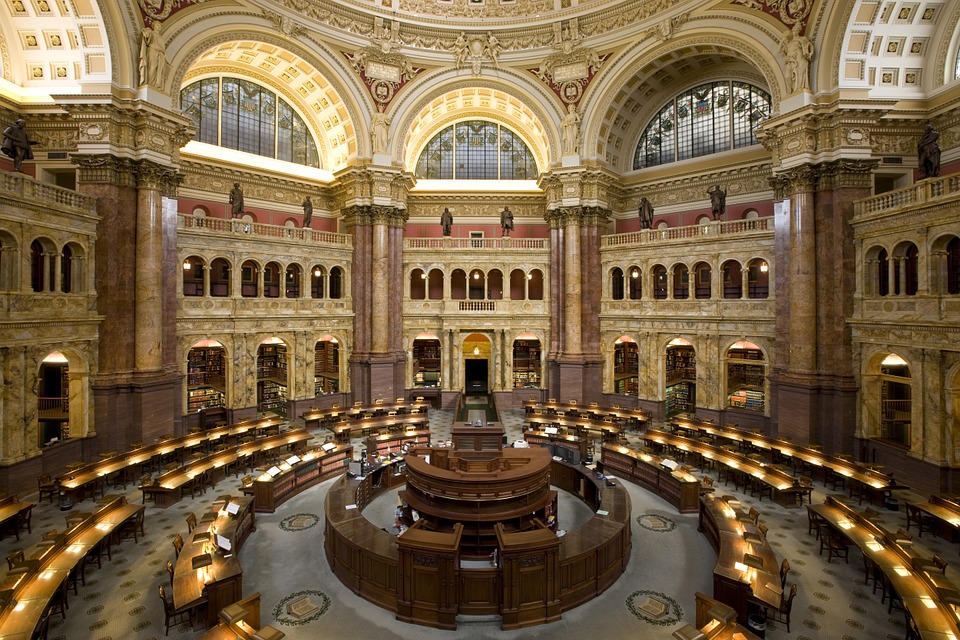 America’s Library follows the history from inception (with the dedication of Thomas Jefferson’s own beloved library to kick-start this new cultural bastion) to early 2000 (the current librarian, Carla Hayden, is not mentioned sadly) with a focus on the thirteen librarians that characterized and shaped the Library of Congress in those initial 200 years. From political turmoil to warring intentions, the library started for Congress itself, a dry host of accessible law research, and evolved into something intending to compete with the long-standing cultural bastions of European nations that had more history, and more fanciness, than the then upstart United States. Law books were still central but recordings of culture from books to music to movies and beyond alongside international collections soon grew a practical partial of shelves into something with worldwide implications. The great library of Alexandria again – but with a modern twist.

Some librarians had more impact than others – and some even spent the majority of their life in service of the library that soon started collapsing from its own ambition. In a sea of backlogs and beset by an array of practical and technical difficulties – everything from devastating fires to invading armies to constricted shelf-space,  America’s Library follows the tumultuous but ultimately successful establishment and survival of the most internationally ambitious library project of modern times.

As the history progresses, sometimes with fits and starts, sometimes with hope and other times with crushing impossibilities and warring factions, technology begins to weave into the narrative with a massive undertaking in the 1980s to make the card catalog available virtually. Union issues, staffing shortages, overwhelming backlogs, and the evolving complexity of multiplying divisions and collection purposes, plus the ever serpentine rules of good old copyright (and establishment by Spofford that effectively fixed the Library with a continual provision of materials) the story complicates and the disorganization mounts. It’s truly spectacular how such a vast project with so many issues, opinions, background politics, and setbacks continued to grow despite its unwieldly scope and to shape the international library system, not to mention the card catalog, as it is today. In this aspect, America’s Library succeeds giving the reader a true sense of the vastness of the undertaking and the incredible truth that such a mission was not only realized but has been successful for 200+ years. Weave in some interesting asides and images, and you have a compelling overview.

Of course, if you want more than an overview, and more on each librarian, you’ll need to sidle away from the glossy coffee table copy and start sussing out some more serious, in-the-weeds works. If, like me, you’re on the lookout for a crash course overview with some verve, then America’s Library is your book. At the least, it’s a good place to start and get a sense of the dynamics involved and the various different offshoots of study that can be pursued.