All Things Cease to Appear 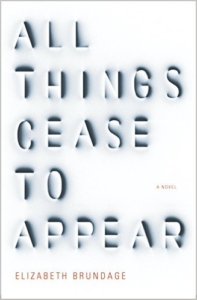 A Plot Ceases to Appear

Touted as a chilling psychological thriller, tantalizingly presented as one of the March selections for Book of the Month, Judge Leigh Haber had my full attention (and monthly selection) when she wrote that readers should select All Things Cease to Appear “If you crave a creepy literary thriller you can easily envision on the big screen, turn off all the lights, settle into a comfy chair near a blazing fire, and meet the eerie protagonists of this sexy, chilling, work of fiction.” All Things Cease to Appear delved into complicated relationships, sexual intrigue, and all things that go bump in the night. The novel opens with George Clare who comes home to discover that his wife never got out of bed after he left for work, her head pinned to the sopping pillow by the farm axe, her blood mottling the wall in a chilling fresco. George’s three-year old daughter, Franny, was the only one in the house, with her murdered mother all day, and it’s hard to tell if the little girl will ever remember what happened. The police investigators suspect the strange out-of-towner husband but despite circumstantial evidence, they can never quite pin the blame on Clare. And so, for twenty years, the town wonders and the farmhouse remains, abandoned.

From here forward, everything is a backwards rewind of ghosts and dismay, combining the tragedy of two unhappy families united by the ill-fated farmhouse. Back in time, we witness the story of the three Hale brothers living on the failing dairy farm. Waking up to discover that their parents committed suicide in the night, the boys progress through grief and the downward trek of drifting orphans. The farm is seen as unlucky and remains desolate until the city-slicker George Clare and his disillusioned wife arrive to inhabit the countryside. George is an esteemed academic of Art History and an ardent disbeliever in the afterlife. His department chair, however, is intensely interested in the possibilities of the beyond and opens an eerie dialogue to match the depressing nature of the narrative.

George’s wife, Catherine, is the main narrator throughout the disjointed flashback. Alone in a house with a distinct presence, Catherine contemplates her failed marriage and the strange off-ness of her husband. As events escalate and George’s deceptions are unveiled by those around him, the building blocks for murder begin to stack up, as do the intimations that the Clare’s are not alone in their country farmhouse.

The premise has the sound of an exquisitely creepy read with the added benefit of some emotional and intellectual depth. Tack on the term “literary” and readers are ready to pull out the tissues and block off the calendar in pursuit of what will, evidently, be an unforgettable experience. The promise, however, and the eloquent write-ups, deliver far more than the actual story which is heavy on depressive atmosphere and light on actual plot.

The opening chapter is gripping and twisted, with a desperation that gives the story a thriller-like feel – the first and last time All Things Cease to Appear does anything thriller like. From here forward, we are in constant rewind, twenty years in the past, and the urgency of the murder and the desire for its solution wanes as the narrative slows, then crawls.

The stifling claustrophobia of the farmhouse and the aura of death and intense depression is consistent, mired as it is in the dense imagery and the elegant writing. It soon becomes enough to elicit actual hopelessness; the oppressiveness is so well evoked, that readers don’t actually like spending time in the world of the novel.

The Hale boys, naturally shattered by the decease of their parents and their own mother’s subjugation to a life of abuse and hard work, linger around the desolate farmhouse and soon become involved with the Clare’s, specifically Catherine. The undercurrent of lust and desire hides something more disturbing, a mutual understanding of degeneration and a free fall into loveless-ness. It’s certainly literary and summarized sounds like quite the accomplishment, yet the essential spark that would make it human is somehow missing. Catherine and the Hales are closed off to us. The Hales, somehow, are utterly boring and their presence clogs the flow of the tale and tries to complicate a bad marriage story with another, older, and incomplete drama. Combined together the stories serve to confuse length and deepness of concept with actual emotional attachment to the characters. None of them seem real, their own tragedies too stifling to let readers in and far too overblown to allow us to easily fall into belief.

George, and the narration of his occasional mistresses or love-interest-who-is-the-hippie-friend-of-his-wife, strengthens our dislike of the narrative because the villain, ultimately, is something that is too fiendish and yet too cold to draw our interest. A disinterested, examining evil, George is the evident sociopath of the drama, and while his actions leave behind broken lives (among other, more grisly things), he seems a mere creation of literature drawn to mean something – and no, I don’t know what that elusive yet promisingly intellectual something is.

The academic, pot smoking, mushroom tripping crowd drinks far into the night and chatters on about obscure painters and the supernatural, making everything very elite and bohemian while generating eye rolls from its non-professorial audience. I don’t care about the character’s bacchanalian theory regarding the ultimate meaninglessness of life but instead want to get back to the farmhouse with the strange light and chill presence. I want to go back to that first chapter and the mystery that intrigued me. I want to know what Franny saw and what really happened that day.

But, of course, being literary, the book never actually tells you any of what happens. The last chapter leaves us with more intimations and confirms what we already know – but the heart of the details is missing and this 400+ page “mystery/thriller” with its literary aspirations is nothing more than a ghost of a story. In the end, even the farmhouse gives up her dead – gives them up in the shrugging way of indifference in that we never know if there are, indeed, ghosts and if so, how they ever related to the bad-marriage or to the sociopath story.

All Things Cease to Appear is ultimately the stereotype that makes readers cringe when they hear the word “literary” and despite its beautiful, ok ephemeral, writing, I don’t think of it as a true literary novel – and certainly not the tense masterpiece most people seem to enjoy. Does literary necessarily mean a disconnection of emotion and soul in favor of effortful vagueness? Do literary novels always represent stoically amoral characters in the vicissitudes of tragically giving up against a collegiate background? I say, no. True literary novels are meant to stir the heart and soul – and they aren’t afraid of being exciting – dare I even say it – entertaining at the same time. A true literary tale, with an examination on trust and marriage should say something about humanity and the depth of our experience. A true mystery/thriller should give you the lead up to the crime, the crime, and the comeuppance, and at least some answers to key questions. All Things Cease to Appear does none of those things and after exhaustively having chugged through pages of impressive vocabulary, ends with a blasé twirl into complete obscurity.