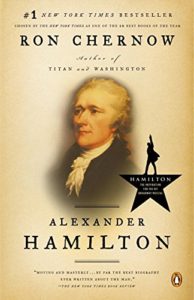 Following up a visceral campaign season full of name-calling and family-splitting hyperbole, Alexander Hamilton is an even more relevant perspective on both our nation’s formation and flaws. Chosen by my book-club as our mega-read for the December hiatus, we decided to kick 2017 off by being both ambitious and politically astute. It is timely, after all.

Those who know me are probably surprised to see a non-fiction book on anything, much less historical politics, appear on my reading list. They’re probably even more surprised that I not only read and loved Hamilton but went out to buy more of Ron Chernow’s weighty books. Reading with the verve of fiction, Chernow’s extensively researched biography of one of our most influential and misunderstood forefathers is gripping from both an intellectual how-did-we-get-here level to an emotionally satisfying level. Working his way up from nothing, a poor immigrant with a splotchy family history, Hamilton symbolizes the American way and represents the hardships of a self-made man. Ahead of his time in many matters, including his strong stance on abolitionism and sense that the United States’ economy would be more market based than agrarian oriented in the long run, Hamilton proves himself brilliant, fallible, and easily mysterious. Derided at the time by his affluent political enemies (Jefferson, Madison, Adams) as a money-grubbing monarchist, the acclaimed father of capitalism never did anything by halves.  Hamilton both excelled and failed in very visible, public ways. A dynamic character Hamilton’s flaws were almost as great as his strengths. The founder of American banking, Treasury Secretary, co-author of The Federalist Papers, and devoted father also gave America one of its first, most scintillating sex scandals. Hamilton’s early death at 49, Chernow argues, left history open to be written by his enemies and competitors and the biography is half factual representation and half call-to-action to clear the name of America’s earliest scapegoat.

Coming from an apathetic political stance and an admittedly ignorant historical stance (it’s been a good while since that one college class on World History), I was surprised by how much Chernow taught me in the form of a compelling story. One gets the sense that the biographer is living the moments as he writes them and these forefathers, unlike the be-wigged ones you remember from stifling childhood classes and tests, are vibrantly alive. The energy of the read brings the long ago to the now, and while we know where it all ends, it’s hard not to get caught up in the tension of Hamilton’s various triumphs and failures. The fact that Chernow didn’t shy away from Hamilton’s flaws, but paints them with honesty and empathy, brings this complex political rock star to life in a way that is both fulfilling and effectively educational. Unlike my old college history course, I remember what Chernow taught me in between the hefty pages of his opus, Hamilton.

Having first heard the Hamilton Broadway Recording at my politically non-apathetic fiancé’s insistence,  I was mesmerized with the modernity of the issues. Figuring that the cast of Hamilton had jazzed up the original book, with its austere cover image, I was surprised to find out that the energy and resilience originated in Chernow’s biography. Reading Hamilton in the middle of a much contested, seemingly endless election more suited to description as a smear-campaign, history makes its message clear: there is nothing new under the sun. The despairing cry of Chernow’s recorded public echoes the hyperbole of today, and the viciousness of the two-party system in Hamilton’s time isn’t quite as rare as we’d like to think. The dissenting views that the opposition would “destroy” the country and the overdramatic accusations of everything from thieving to licentiousness evokes the regrettable fact that human nature hasn’t really changed and what we consider a unique circumstance in our own lives isn’t quite so unprecedented after all.

If the past election, and upcoming inauguration, has got you thinking about the why’s of our system, Hamilton spells out not only the making of a man but the formation of our country. Taking laws and processes that seem overly complicated, Chernow breaks everything down to its fundamental intention and shows us how we got where we are today. Surprisingly, a lot of the country’s formation is more off-the-cuff than you would have expected and the growth of a nation is more perilous and less planned than your grade-school lessons on the forefathers would leave you to think.

The only element frequently criticized about Chernow’s project is the representation of Hamilton’s adversaries, most notably Adams and Jefferson. The villainy of both is inherent and readers who already distrust Jefferson because of his support of slavery will finish this book with a burning hatred. Others claim that the representation here is inaccurate and like Hamilton, Jefferson was a complicated human with both good and bad aspects, as averse to a purely evil persona. For myself – I don’t know. Gut feelings make me tend to agree since the world is rarely black and white, yet as stated, my historical knowledge is not exceptionally broad. Read with care and, if you’re motivated, there are plenty of other books out there which go farther into the psyches of Adams and Jefferson and give a more well-rounded perspective.

All in all, Hamilton is an epic, breathless read that is even more relevant at our current point in history. Moving and informative, Chernow strikes a balance between the feel of a novel and the soul of fact. Highly recommended.