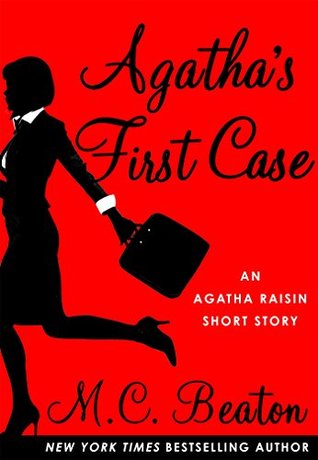 Agatha’s First Case is a quick prequel to the series, a short story that gives us the origin story of our now famous, grumpy Cotswold’s sleuth. Before Agatha was a PR maven, she was a young woman, fleeing her Birmingham upbringing and her first husband. At age twenty-six, Agatha falls under the doubtful tutelage of a snooty PR executive, only to steal her boss’s client, a wealthy man accused of murdering his trophy wife. Somehow, Agatha senses that he didn’t do it. No one else believes in him, and so as Agatha handles his PR she looks to clear his name and solve her first case.

Agatha’s First Case has much the same feel as the book series, only condensed. Agatha bumbles more than anything, and while a few keen observances and guesses work in her favor, the killer essentially falls into her hands (after a dangerous confrontation, of course!). It’s fun though, and the story works. It has that cozy Agatha aura and the younger version of our heroine has as yet to gather the rough edges and brutality that will mark her later as less than sympathetic. Her meteoric rise is dues ex machina and doesn’t bear a close examination, but by now readers aren’t dialing in for the realism for this oddly cozy, imperfect soap opera that is Agatha’s twisted life. Recommended, especially the Audible version.