Agatha Raisin and the Love from Hell 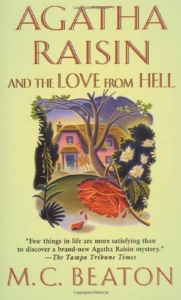 A Bitter Conclusion to a Rocky Romance

Returning to Agatha’s tumultuous life after a short break, I was anxious to see how the long anticipated marriage between our favorite ill-tempered sleuth and her on-again, off-again man would pan out. From the beginning, Agatha’s strength of character and assertiveness have revealed her vulnerability and her emotional neediness. Always the brazen business woman, Agatha is having difficulty not only with her own aging and retirement, but with her lonesome status in the world. Curiously addicted to a bad relationship, Agatha has always been a tween at heart for the emotionally vacant James, her neighbor and occasional lukewarm lover. Thwarted in her first attempt to marry James by her ex-husband, Agatha is finally able to make a go of the second attempt – only to lead to the oh-so-evident disappointment of marriage with James.

Still living in separate houses, leading separate lives, James’ ratty nature and continual criticism are even more wearing on Agatha; her desire for a helpmate is repeatedly thrown into her face by her husband’s continued distance. Conversely, Agatha’s braying personality and lack of tact continue to drive James further away and before long the couple’s public fights are legendary in the village.

It’s all going from bad to worse when James begins to sneak around with his old girlfriend, Melissa, confiding his biggest secret to her. So, when James suddenly goes missing after being threatened publicly by his own wife for playing the lover to another woman and Melissa ends up dead, town suspicion lies heavily on Agatha’s guileless shoulders.

Determined to clear herself and find her husband, Agatha embarks on a melancholy investigation with her sleuthing pal, acrimonious Sir Charles Fraithwait. Bitter, numb, and in denial, Agatha investigates in starts and fits ever subject to her own reeling mind and deadened emotions. Accepting the fast disintegration of a new marriage and her hopeless lonesomeness, a spiritless and defeated Aggie is continually kicked while she is down and out. Meanwhile, an alarming portrait of James’ lover is revealed and Agatha soon comes to fear the worse for her cheating husband.

Always ever-present with that bittersweet edge, readers are long since used to Aggie’s moroseness and her hapless ability to fall in love with the wrong man at the wrong time. The entire James story has always been a thorn pricking into the otherwise cozy fabric of Agatha’s life and as divorce looms its ugly head the thorn becomes a gigantic nettle, shredding everything. Readers devoted to Agatha and the compatriots of her world will enjoy the tale no matter what and stick by Agatha in her dark times. True cozy mystery readers, however, will churn through desultory pages looking for the charming Cotswolds’ pull and emerge instead depressed and a little confused.

The plot and the search for James echoes Agatha’s own cresting emotions, evoking the fits and starts of grief combing with a desire to move onward. It’s not the best Agatha mystery and while there are clues, they do not tie together. The case against Melissa herself is strong, yet the mystery of James and the murder itself seem separate. Agatha and Sir Charles cannot find the thread that will lead them into connecting Melissa’s past with Agatha’s bleak present. Finally, Agatha has an intuition that proves rather Dues ex Machina and the answers are simply spoon fed from the killer to the victorious sleuth. And then, its over. James has gone exceptionally out of character and Agatha, too exhausted to care, ends the mystery as she began it, defeated and disinterested.

Agatha Raisin and the Love from Hell is an essential to the series in that it represents a turning point in Agatha’s life. Plus, we as addicted readers, have long since fallen for our heroine and the characters that people her world, are there for her, for better or for worse. Adamant cozy mystery fans, however, may be displeased by the meandering aspect of what is a semi-sloppy and extremely sad addition to a beloved series. Read it, but don’t harbor high expectations.