Agatha Raisin and the Day the Floods Came 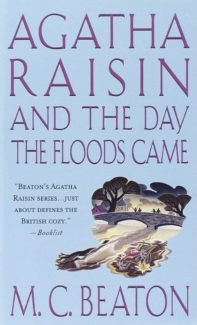 Back to the Cozy Cotswolds

Jilted by her feckless husband now turned monk and abandoned by her on-again off-again friend and fellow investigator, Sir Charles Fraith, Agatha has hit a new low in her life. Despite being strong willed and more than capable of snapping out a defensive reply, Agatha’s distinct aloneness has left her sick of village life – even the sympathetic Mrs. Bloxbey. Determined to clear her mind and mend her heart, Agatha goes on vacation only to delightedly discover that her new South Seas journey offers opportunities for easy friendships and cathartic sun soaked days. She barely even bats an eye at the honeymooning couple onboard the ship – even though something about them isn’t quite right.

Soon enough it’s time to return to Carlisle and the reforming Agatha is determined to give up both men and cigarettes, even though all the local ladies find her mysterious new neighbor quite a dish. When a letter from abroad arrives telling Agatha that the suspect honeymooners were embroiled in schemes of murder and treachery, she regrets ignoring her gut instinct for investigation. Which is a good thing, because all the bad weather and rain has flushed out quite a few homes and some dire secrets – including a floating corpse bride. The police suspect suicide, but Agatha is not one to ignore intuition a second time. Joining forces with the dashing author-in-residence next door, John Armitage, Agatha begins a new, hopefully healthier, way of life . . . but along the way she’s caught the attention of a desperate murderer and a frustrated police force. The only question now is – who’ll snatch Agatha first?

The twelfth book in M.C. Beaton’s cozy Cotswolds repertoire of the delightfully industrious and yet emotionally vulnerable Agatha Raisin wends readers back from the previous abyss of Agatha’s depressing marriage and gets the cozy cranking again. Agatha’s story still has that distinct tinge of melancholy and loneliness that keeps the tone somewhat serious, yet there are plenty of moments where the focus is either on the beauty of the Cotswolds, the serpentine nature of the complex corpse bride shenanigans, or the myriad motives for murder.

This time the old cast of unreliable love interests thankfully gives our gullible (and yes, still very teenage Agatha) some much needed space, allowing her to concentrate more on investigations and new chances. Suspecting the fiancé of the simpering dead girl, Agatha goes undercover. Enhancing her detective prowess, there is more subtly to the series in Agatha Raisin and the Day the Floods Came. For the first time Agatha takes a disguise and several false identities, infiltrating a local club scene where she suspects hidden agendas will lead to a killer. With John Armitage as her new right-hand-man, the duo promises a heightened concentration on detecting and increased realism for the series (although, it’s still delightfully in the world of cozy and not a hard-bitten detective thriller by any means.)

The mystery itself has a hint of the ghoulish but is mostly about clues and internal motivations with some village history built in. The danger escalates as Agatha takes more chances and merges into a semi-professional role and her relationship with the police, plus their eventual recommendation, promise a new and satisfying direction for the series.

Ending with the usual confrontation, The Day the Floods Came has an especially heart-pounding denouement with a set-up for future love foibles for a still overly sensitive Agatha. More honest about Agatha’s failings and contributions to her own difficulties, the series here acknowledges both the good and the bad in out delightfully grumpy gumshoe and gets readers excited for the next installment. Plus, we get to visit with Hodge and Boswell some which is always a good thing.