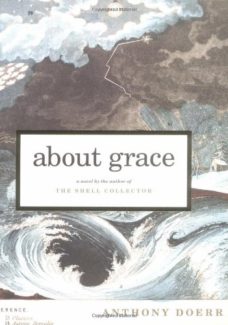 About Grace is a strange novel, equal parts despair and hope. The narrative is encapsulated in a snow globe type of world where the liminalities of the weather supply the beauty and ferocity that the hopeless characters can only appreciate but never attain. In this beautiful but destructive world where the transformations of water mean everything, we meet David Winkler, who is not fluid but merely staid, half in fear, half in the hope that he can change his own oddly set fate. As a child Winkler would sometimes see things before they happened such as the man with the hat box who was doomed to be run down in the street and the ghost animals that spiraled around the room when his mother died. As an adult, his dreams gained more power, each terrible predication unstoppable and true . . . until he dreamed of a woman in a grocery store and knew that this time fate was kind, if not complicated; she was to be his. 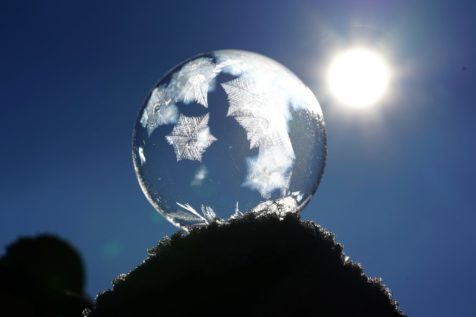 With the single minded surety of a prophet, then, Winkler has built his life on dreams, but when his young daughter Grace is born and his dreams predict his hapless involvement in her death, the only way he sees to cheat fate is to run, to abandon everyone and everything, for the safety of his daughter.  Half a world away, cast away on a tropical island with his PhD hidden and his beloved snow gone, working as a grounds man, someone else’s daughter and the return of the dreams gives him a buoyant sort of hope and the desire to fight. Twenty years later though, is it really too late to make amends with an abandoned wife and a daughter who grew up never knowing her father?

About Grace embodies the slow burn of densely packed snow. It’s a powerful and thoughtful, if not a happy, novel about the difference between choices and the odd predestination of fate. Winkler is a sympathetic character, in his own odd way, even if his choices leave us either groundless or just plain mad. Even as a child, we see that while he has the mind of a genius he has a certain social disconnect which is not associated with his nearly bottomless ability to care, at least about certain people. Winkler though, does have a certain self-centeredness. For example, when his dream showcases him meeting a woman (Sandy) in the grocery, he takes this less as a predication of an occurrence but more as a certain right. Sandy is married, and Winkler sets about the slow dissolution of her marriage with no guilt, but jealousy. The way in which the final severing occurs, its encouraged taste of heartless abandonment, furthers the transformation of our character from one who is acted upon to the vengeance of the storms he loves.  It’s the type of action which can bode seriously ill for readers’ empathy for a character, yet somehow it fits in with Winkler’s odd, staid world, and as the novel progresses the hated ex-husband comes into play later to teach Winkler things his dreams never can, things about forgiveness and the human heart and the poignancy of the disasters we leave behind. 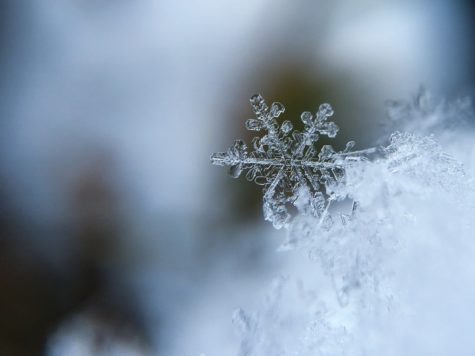 Doerr makes this novel special partly through content – the uniqueness of both character and his fateful affliction – but also through the melodic intonation of the writing itself, which falls like snow, each flake making that soft whump of impact as we read. It’s a novel that teaches, in a way, something with a depth and beauty not easily forgotten. Relationships are a key here, as is the fear of communication and the awkwardness of both loss and old love. Add this to the vaguely supernatural tenor of Winkler’s dreams.

About Grace ends, entrenched in reality, both ours (the after effects of a man suddenly abandoning his stolen wife and infant son) and its own (the dire possibilities of the inability to change, dreams or otherwise). It is never a happy novel, yet the ending has room for possibilities, depending on how you want to look at it, and the slow intonation of the rising emotional narration, peppered with the beauty and unchanging volatility of weather, makes it something we keep coming back to. This is my first experience with this author, and fittingly enough, his first novel. I’ll be coming back. There is a greatness here, a compact unuttered subterranean world that is both vivid and intensely, privately secret. I need more.