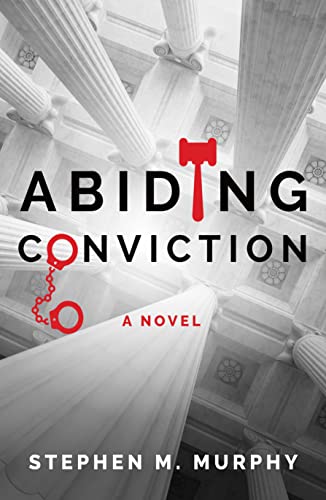 A Killer, a Kidnapper, and a Case

Dutch Francis is at a crossroads. His wife recently announced her pregnancy, and the couple argued. He wants a family. She wants a career. It’s a conversation that has to wait, however, because they both have busy work days. Only they won’t see each other that night. Or for a long time yet. Dutch’s wife, famous local newscaster Ginnie, has been kidnapped.

Meanwhile, Dutch has acquired a big case. He is defending a local judge accused of murdering his wife. But with Ginnie missing, how can Dutch possibly concentrate on the case? When his hard bitten client insists that he remain as counsel, however, and the court upholds the request for an expedited trial, Dutch is helpless. He wants to search for his wife, but his client won’t let him. Meanwhile, the police are suspicious of Dutch, and their misdirected efforts aren’t helping Ginnie.

This is my first time reading the Dutch Francis series, and I began with Abiding Conviction, which is book three and works a standalone legal thriller. The author is a retired civil trial lawyer, and that experience enlivens the pages of this work as Dutch struggles to defend his client. The story oscillates between the developing case, Dutch’s ability to establish a reasonable doubt about his client’s guilt, and his extracurricular searching for his missing wife. The stories complement each other well, keeping the tensions strong and giving readers a reason to root for Dutch. Combining a personal tragedy and a legal courtroom drama was the right call, keeping every chapter moving swiftly, allowing the stories to build a cadence, to pause at a dire precipice as the harried Dutch shifts focus, and to lead to the ultimate ending that ties it all together in a gruesome, but exciting, finale. I have to get the first book in the series now.

The story of Judge Garcia and his wife – the one the prosecution claims he murdered – is darn good trial material to begin with, and even Dutch has doubts about his shifty client, a man so unlikable that Dutch insists he not testify at his own trial. The defense position then becomes one of establishing doubt. Does the jury really have an abiding conviction (in other words, a near surety) that the client is guilty? If not . . . well, that is Judge Garcia’s only hope. But the evidence in the judge’s favor is sparse, and Dutch is forced to try every trick in the book from a mental autopsy on the deceased to delving into her secret life. Lovers of legal thrillers and thrillers in general will be infinitely pleased.

Meanwhile, we have the Ginnie saga. Dutch is convinced that the kidnapper is targeting him. Was it an ex-client, someone he convicted, or someone unhappy that he is defending Garcia? Dutch may be a great mind in the courtroom, but here the stress tells on him as he stretches the laws (and sometimes the boundaries of good sense) in a desperate effort to find and bring his wife home.

I read Abiding Conviction in a few sittings and thoroughly enjoyed every moment. I’m always looking for new series to enjoy, and while I got this one as an uncorrected proof (the perks of being a dedicated reviewer who just has to discuss every book she ever read), I’m going to have to get the rest of the series and follow Dutch through his courtroom and life dramas. Highly recommended.