Walk in the Woods, A 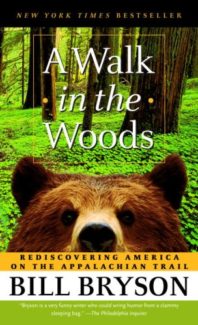 A Slapstick Escapade Through the Woods

With Bill Bryson hitting up some local colleges in Frederick, my book club decided to shift the schedule and include a Bryson book read-athon in preparation for his speech. I recalled hearing of Bryson and seeing this particular book cover way back in the mists of time when I was first in college. I knew Bryson had been a big-name author of general non-fiction ranging from every topic under the sun – camping to the dynamics of the English language. However, I didn’t know he was still, as they say, “a thing.” After the onslaught of excited readers to Frederick and all the consequential full auditoriums and traffic jams, it became pretty obvious that Bryson is hardly a spent force or a forgotten bestseller of the early 2000s.

A Walk in the Woods was our suggested book club pick, with the caveat that reading anything by Bryson would also be acceptable. I decided to stick to the title I had most heard/seen even though my interest in hiking doesn’t extend beyond the occasional trot around the block to help-out my Pokemon-Go index. I was, after all, going to find this book dull, but at least the kitschy cover promised a bear story somewhere in the midst of all that health/outdoorsy stuff. Bryson, a general eccentric odd-ball of the authorish type begins the book slightly overweight and out-of-shape. In the mood for resolutions, he decides to hike the Appalachian Train which stretches from Georgia to Maine, covering hundreds of miles of untouched (or, at least, mostly untouched) American landscape. He’s never hiked before and although all his research has lead him to piles of books about bear attacks and all the different ways you can die in the woods, he’s already announced the idea, and there’s no going back now. What ensues is a semi-educational, semi-slapstick, semi-sarcastic rendition of a half-assed attempt at hiking through the great wilderness with a sardonic narrator and his unfit pal, the tag-along Katz.

A Walk in the Woods has a weird, seemingly sleepy premise. Man wants to hike. Man buys stuff. Man hikes. And at the surface I suppose it is. Yet the sense of adventure and the desire to mow over those comfort zones is intriguing and readers get into the escapade. We enjoy living through Bryson and his seemingly random sidekick. Neither of them are serious in the annoying way of all mad hobbyists, and for this even non-athletic couch-potato readers (yours truly) can get involved with the adventure and, Lord help me, even start to think about hiking or exploring a little.

What makes the narrative even more relatable is its easy, conversational cadence and Bryson’s sarcasm. Nothing is sacred, and sometimes that can get annoying (hold on, I’ll get there), but the self-depreciation is if not always laugh-out-loud funny, a good chuckle. It starts out with a trip to the store for supplies and ends with readers guffawing as the usual salesmen shenanigans get going with over expensive gear and lots of random tech jargon. From here forward, we’re into it. This is an every-man trying an extreme, and that’s more than enough for me to put aside my initial prejudices.

Furthermore, Katz, a long lost semi-friend of Bryson’s adds another layer of the truly bizarre. A man in poor health and a distinct non-hiker, Katz seems like a random and ill-fated choice. His antics are downright dangerous (such as throwing away food when he gets frustrated with a heavy pack), yet something about the tone and the way it’s all told makes us like and even sometimes root for the misanthropic Katz.

Does everything in A Walk in the Woods work though? No – no, because they are quitters which affects my arm-chair enjoyment. I was fully dedicated to comfortably sipping my Sherry, reading under a pile of blankets about all day hikes, getting lost in the woods, other campers, and murder legends. I felt unreasonably let down when my under-dog heroes then make the decision to skip a major portion of the trail and not fully complete the quest. Just, no. I signed on to watch the complete misery, not an abridged version. Don’t do this to me!

Likewise, at times Bryson’s humor gets a bit, well, mean. During the portion of the trail which snakes through Tennessee we get a lot of the Deliverance-look-at-this-Neanderthal-hillbillies-play-banjoes-and-chow-down-on-hog’s-feet vibe. It’s to the extent that eventually, Katz and Bryson decide to cut out the portion of the trail which works its way through this region (see previous rant.) The jokes here encompass a wide group of people and if you happen to be from Tennessee (guilty) the misbegotten humor tends toward the insulting. Oh, and did I mention that the cover lied? Where is my damn bear story/ferocious forest beast encounter!? It’s almost enough to very nearly make me get off the sofa.

Of course, beyond just the giggles and general absurdities that accompany the inexperienced as they take on skillful goals, A Walk in the Woods has a moral: the depletion of our natural habitat and the general disrepair of the Appalachian Trail.  The book does make you want to get out there thanks to the funny sides of a hard adventure, but its hardly all tweeting birds and fresh forest scents. As a matter of fact, there is very little description of the landscape, period. What we do hear about is the history of forest care in America (admittedly, sometimes for too many pages) alongside Bryson’s practical debunking of the two environmental stances: 1) let’s plow it all under and make a giant mall and 2) let’s worship nature, live in huts, and slowly starve to death while worshiping the sun. It’s not exactly a call to action so much as a general wake-up and raising of awareness: here’s what’s happening, here’s why, and here’s why that is just plain ridiculous. Bryson’s middle-of-the-road stance makes the historic and informative chapters palatable and effecting, although not as much fun as the simple joy of adventure and people striking a blow against the odds to achieve something big. In the conclusion, the book has a bit of everything from general human interest to educational forays to scary-by-yourselves-in-the-big-woods stories. As a matter of fact, I just might try this author again.