Salty Piece of Land, A 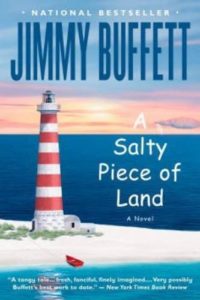 A Salty Piece of Bland: Or, How to Make a Reader Salty

Setting off from a magical wedding day into the soothing charms of a private beach home where the tumbling waves of Saint George’s Island could be heard laconically through the closed windows, the hubby and I thought that the best type of book to kick back and initiate married life with was a sea themed piece. During our long drives as we explored Florida, I introduced him to horseback riding, ate some alligator (delicious), prowled the beaches, hunted for regional Pokémon not in the DC area (ok, that lead to a three-hour drive – but worth it), and we put on an abridged version of Jimmy Buffett’s A Salty Piece of Land. What could be more atmospheric? A Salty Piece of Land was from one of my near-constant eBay book binges where I discover new authors and books, and although I whined that an “abridged” book isn’t a book at all, Trav won out in the end and we slipped this strange non-story into the CD player and were instantly greeted by a clangy, whiney song that we at first assumed to be some sort of sarcastic rendition of the tale to follow. We instantly skipped forward to chapter one.

While foreshadowing is so easy to see in story plots, it’s less so in life. The off-putting combination of island and country music jammed into some sort of piratey theme was a failed indication that wedded bliss should never begin with a book so enamored of itself that the author feels the need to sing about his creation. Instantly, we’re thrown into an uncomfortably self-aware book about nothing that thinks its deep.

A Salty Piece of Land begins with Tully Mars, miserably read by an obviously bored and toneless John David Souther and Hank Jacobs, who proclaims himself a cowboy on every other page. Having thrown a table through a window (his bad-ass experience as said cowboy and the end of a toxic working relationship that gets zero explanation – thank God) he’s now on the run. The man is wanted . . . for throwing a massage table. . . out of a window. . . and not at anyone or anything. . . But the bounty hunters do come from said vindictive employer and each hunter is more sadistic and weird than the last. And so now Tully has embraced his life-long dream of being an Ocean cowboy . . . and island hopping.

Along the way, he mixes with characters who have names (no kidding) like Captain Kirk and Clark Gable, not to mention the annoying Peter Pan named characters and others I undoubtedly missed or simply tuned out. Wikipedia, in all it’s wisdom, notes that this naming trend combines science fiction, fantasy, and drama into a “Caribbean themed epic.” Mmmmhmmm. What famed singer and song-writer Buffett was really trying to accomplish with the iconic names in place of real, down to earth characters, remains a mystery. The effect, however, is one that breaks the fourth wall and reminds readers continually that this is all made up, all fictitious and very aware of that fact. How then can you lay back into beachy island zen if the novel can’t hold back its random tendency towards the absurd? The answer, of course, is that you can’t.

Moving along, commitment phobic Tully almost reconnects with an old girlfriend, just to lose her to Clark Gable (see! See what I mean). At one point there is a confrontation in a tree, a talk, with a legitimate Native American spirit whispering into Tully’s ear in the background (no, I don’t even) that is supposed to be a turning point for Tullly. He (and consequentially we as his laconic, tag along audience) are supposed to be realizing something about life and maturity here. Whatever the hell it is, though, remains elusive in the narration, at least the abridged copy anyway.

Going forward, running from the bounty hunters and working alongside The Lost Boys as some sort of fishing resort guru, Tully meets different natives of the lands. He goes everywhere from a sex-travaganza beach party to an airplane cult, sort of riding the waves. However, none of it really ties in but is mere blips in the drunken haze of life lived half asleep. Tully himself seems unaffected, whether with a beautiful woman dancing in the foam or waiting for death at the hands of a bounty hunter. He just doesn’t care and consequentially, we don’t care either.

The side characters from his evil bosses’ crazy daughter to his Mayan friend, to the gay pilot of a pink seaplane are all so one dimensional. They never jump off the page and while they certainly have more verve when compared to Tully, and at least seem to be involved with life, they are ludicrous, unreal, and just ultimately thrown in there, maybe because we’re looking at them through Tully’s dead cowboy eyes.

No doubt struggling with the back-cover blurb, the desperate writer keyed onto Tully’s “adventure” with 100+ year old Captain Cleopatra Highbourne, a woman of the sea (aka, modern day granny pirate) who lives life to its fullest and is determined to fix up an old lighthouse. The key item in the search here is a bulb for said lighthouse and since Cleopatra is one of the more interesting side distractions, the book claims her and the lighthouse as its prize (i.e. the plot). Searching for the bulb, Cleopatra takes Tully to Cayo Loco where he apparently falls in love with “the salty piece of land” and starts to settle down.

Maybe it’s the abridged version (probably) but Cayo Loco has very little page space and Tully almost never gives us a view of this paradisial island world around him. His connection to Cleopatra is vague and his reason for staying and following the quest is even less well developed. If there is an emotional pull we don’t feel it. As a lover of all things antique and completely impractical (I drive a car from the 50s, I own a typewriter from the 30s, I still use a WalkMan) I found the entire “restore derelict place with lightbulb plot” totally vapid and impractical. When it was first introduced I thought “there, finally, something I can identify with – restoration of past beauty and love of old things,” But, nope. Maybe if the lighthouse was described more or it felt like a landmark that should be saved – or had a reason to be saved). Having the epic quest of a book which even in abridged form was long be the attainment of a lightbulb is far too light, too little, too stupidly torpid.

In the conclusion, the entire book is a boring day on the beach – one of those days where the sand is gritty and all over you, the weather is too stifling to inspire beach sports or even swimming, the water too murky and muddy looking for fun, the fellow beach patrons all loud and in bad moods accompanied by squalling children and dirty pets, your chair folding in all the wrong directions and collapsing without warning, and your nerves jittery as though you’ve had a caffeine shot because you seriously would rather be doing anything else than sitting here. Although, you’re supposed to stay because this is “relaxing” and “fun.” This, this description is the portrait Buffett gives us of his Caribbean adventure and instead of wanting to swashbuckle and teach parrots to ask for crackers while drinking rum and twirling fancy little food umbrellas, you just wish you could go the hell back to the office and end this “vacation” already. Fortunately for me, my honeymoon was filled with the perfect kind of beach bliss and even Buffet’s attempt to make the tropics hateful failed, but only because of who I was with and the beauty of marrying my best friend and the love of my life. Even still, with the sentimental glow in my eyes and a longing to return to honeymoon, A Salty Piece of Land goes down as one of the worst books I have ever read. One star . . . and that’s only because negative stars aren’t a thing . . . yet.