Portrait of the Artist as a Young Man, A 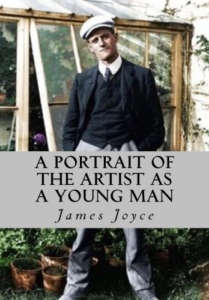 The Misery of Modernism: All the Reasons Why You Should Give Joyce a Miss

Back to my snatched list of the 100 Greatest Books published by Easton Press and graciously uploaded by a long ago eBayer desperate to off-load some books, I was back in the classics game. Even better, I now have that fancy new Kindle and an Audible subscription, making books I previously couldn’t get on my outdated portable CD player available. My joy, however, was short lived when I saw the next book on that list was A Portrait of the Artist as a Young Man. Having experienced James Joyce repeatedly in the form of The Dubliners as an English Major and then later in my fancy literary theories for advanced egg-heads class (my naming convention), and then even later in grad school I was less than thrilled to return to modernism and experimental fiction. I like my books with plot arches, characters, and centralized, distinguishable meanings, and none of that all-too murky free-indirect speech nonsense. Add to this a general dislike of Joyce’s typical depressing nihilism and you have a recipe for one very cranky reader. With such low expectations, at least, I couldn’t very well go lower… now could I . . .

As with Joyce in general and Modernism (I refer to the literary theory) in particular, A Portrait of the Artist as a Young Man isn’t really about anything. It’s a loose collection of five chapters following the schooling of young Stephen Dedalus who questions everything from the devote Catholicism of his upbringing to the traditions of his then contemporary Ireland. Along the way Stephen’s questioning leads him to form a bond with some secular school friends, thwart his father’s wishes, discard religion, comment disjointedly on current politics, fall in love and then abandon love, and eventually impose a self-exile. All the events are loosely based on Joyce’s own personal story mixed lavishly with a certain inertia which clouds what is essentially a very short read.

Chapters aren’t assigned by weight or evenness and Stephen’s almost stream-of-conscious narrative shifts dramatically between meandering thoughts and half formed ideologies.  As a vaguer version of fellow modernist and free-thinker Virginia Woolf, Joyce allows his narrative neither to be crafted by style nor reigned in by any form of concentration. If you see the beauty in this fragmentation then yay you, you’ve found your author, but if the nebulous writing and the lack of defined meaning puts your teeth on edge, you’ll not only hate Joyce but loath this, his first book.

Swooping in and out of sleep during my early morning metro ride, I ended up taking twice as long finishing The Portrait of an Artist mostly because I kept having to rewind my unabridged audiobook, unable to follow and thinking I must have missed some key transition or explanation somewhere in the rambling mélange. Chapter five with its sudden splurge of dialogue was especially painful; I seriously considered just quitting both from lack of interest in the character’s emerging agnostic humanism and plain irritation at the jangling text and complete destruction of any familiar structural elements.  I wanted the chance to complain about my misery, however, so I forced myself to finish, hopelessly rewinding every few seconds thinking that surely with a Masters in writing I should be able to understand what the bloody book was saying to me, if not topic wise than at least structurally.

Compound my earlier, and lengthy, dislikes with the fact that the main character, Stephen (who let’s face it, is only a slightly fictionalized version of Joyce) was distant, morose, and incapable of producing empathy. For a brief time Stephen’s fanatical, near-fundamentalist devotion to Catholicism and his aching feelings of always falling short no matter the effort are vivid and painful. Readers become interested, questioning, sympathetic, and ready to supply comfort for the inevitable failure. But then, Stephen takes a step back and in discarding Christianity also discards his direct line of communication with the reader – passion. His “epiphany” moment is hidden in erudite text and third person relations only to be superimposed with obtuse dialogue in which Stephen barely participates. The feelings of a zealot leave and are replaced with apathy and nothingness, Stephen’s entire zest gone and replaced by a cold, unfeeling logic that doesn’t deign to explain itself to the readers or even, really, care what we the readers think in the matter.

And so, propagating that aura of aloofness and purposely complicated literary forms, A Portrait of the Artist as a Young Man is a torturous up-hill slog through the thorny land of academia. In the end, we learn nothing other than that sometimes experimentation in the written word isn’t a good thing. Vague and oddly depressing in that there are no feelings whatsoever, Stephen’s story is uninspiring for all those who fail to appreciate the eclecticism of that acquired taste: modernism.