Light from Heaven, A 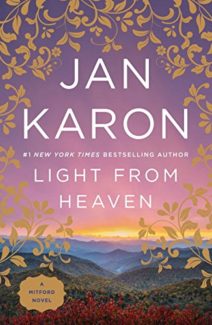 A Read Both Cozy and Life Changing

Still perusing my jumbled eBay book lot, my next surprise selection was A Light from Heaven. I knew nothing about the book or its author, or even that it was ninth in an ongoing series. Nevertheless, the first couple of sentences enchanted me into a world reminiscent of the goodness and humor of The Little House series and a childhood favorite book about a missionary in Appalachia called Christy. The story begins with Father Tim, a retired Episcopal priest who found the love of his life at age 60. Married and content with a household of assorted pets, Father Tim doesn’t really know what to do with all of this free-time after a life full of helping (and sometimes being helped) by an eager congregation. When the Bishop calls with a tall order then, it’s with mixed feelings that Father Tim temporarily emerges from retirement to reestablish an old mountain church called Holy Trinity.

Along the way, this heartwarming series introduces readers to new characters, dilemmas, and an unequivocal sense of peace, family, and well-being. Despite my dislike of starting any series mid-way (or more than midway, my OCD dictates a proper chronological reading order at all times), I was instantly involved and grounded in a world that like the most soothing of breezy Spring days unfurled around me, caressing my mind and tumultuous wedding-planning/surviving work emotions. This book found me at the right time, and just maybe Father Tim had something to do with it…

Since finishing A Light from Heaven I’ve gone on and bought the entire, hardback Mitford Series (to my now husband’s horror – “We live in a one-bedroom condo in downtown DC – stop buying more books!” – as if, dear reader.) The series has a relaxed pace, reminiscent of idyllic bucolic locals and old friends growing closer to one another. Father Tim does his fair share of puttering – including taking on the challenge of baking a cake. I was more than happy to slow the pace down and just enjoy the bliss of the atmosphere created by author Jan Karon, engaging in both the minor and major events in the life of Father Tim’s friends and the close-knit town.

The introduction of Holy Trinity leads Father Tim to discover a whole new cast of devoted characters including an older woman and her son, both of whom have been tending the empty church for over a decade. Father Tim works alongside both woman and son, along the way developing deep relationships that promote healing, forgiveness, and acceptance of what was and what is to come. This dynamic between Father Tim and the dedicated angel of Holy Trinity comprises the heart and soul of A Light from Heaven and while acknowledging the hard pitfalls and disappointments in life, never sugar coating the truth,  Father Tim effortlessly bestows forgiveness and a sense of abiding peace only encountered in living for God.

Side stories populate the busy intersection of new church, new friends, some last minute home remodeling, an exceptionally irritating maid service, and town gossip. Father Tim and his wife, Cynthia, have essentially adopted Dooley Barlowe, now grown into a strong, albeit troubled man. Dooley’s formerly hard life, made vicious by an abusive father who once pulled a gun on him, is beginning to even out under the tender care and instruction of Father Tim. However, there is always the chance that the erring and unrepentant Mr. Barlowe could return, wrecking the hard fought peace of his son’s newly stabilized world.

Meanwhile, a parishioner in a nearby nursing home has some strange news that leads Father Tim on a treasure hunt. Charming 50s cars and eccentric secrets keep the search strong and readers invested in the riddle of the missing money and Father Tim’s ability to find it.

As time passes, Cynthia continues her painting, Father Tim counts lost chickens and wonders, and several long time town residents leave this world for a greater glory. The sadness is intermixed with the all’s right with the world sense, and new characters come to populate the places formerly held by the old, hope growing from death as life continues onward. Humor and love stay strong throughout, as does the beauty of the restored Mountain Church and the message that hope and steadfast prayer pays off. In the conclusion, readers are both content and tearful (a rare combination) and ready to go and buy an entire series.  Jan Karon’s ability to craft a believable cast of characters and capture such an elusive yet strong atmosphere marks an incredible talent. First time readers will find themselves a home and longtime readers will once again be surrounded by family and friends in this charming series. Unequivocally recommended for both atmosphere, soul, and darn good writing.