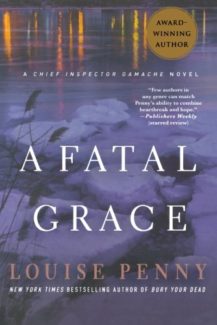 Winter is once again descending on Three Pines, an isolated Quebec village where abuses, lies, dreams of grandeur, and murder are all slowly roiling to the seemingly serene surface. CC de Poiters, renowned self-help author and creator of Be Calm, a pseudo-yogic philosophy that turns emotion inward to create an insidious blankness, has recently moved into the old Hadley mansion – and with her something evil creeps. A brutal, two-faced climber, CC is known for her abusive nature and toxic philosophy and as Christmas carols fill the air, hate fills the village.

CC has enemies everywhere from her overweight and beleaguered daughter to the local “three graces,” – an enclave of old friends who’ve captured the imagination of Clara, our favorite struggling artist. When CC is brilliantly electrocuted at the village curling fete, everyone professes that they saw nothing… but how could that be possible when CC was sitting in front of the action? It’s up to Armand Gamache and the Sûreté du Quebec to unfurl the local silence. Should the killer, however, really be brought to justice? Plagued by a decision that will cost him his career and focused on another case of a kindly homeless woman, murdered and left to freeze, Gamache realizes that the case of CC de Poiters means so much more than the solution to a puzzling incident. His decisions and processes here could fundamentally change the way Gamache sees himself… and the secret eyes that are watching him.

Second in the Gamache series, A Fatal Grace contains all the essential elements readers have come to associate with Three Pines and by extension, Louise Penny’s fluid writing style. A coziness pervades with scenes of quaint villages draped in chilling frost, fires roaring inside shuttered homes, friends and family joking over extravagant meals and glasses of mulled wine. Yet, as with Still Life something altogether disturbing and forlorn lurks within the prose which, albeit beautiful, is somewhat elegiac. Everyone is haunted and it’s in the deepness of the frigid winter that frozen over surfaces provide a distorted window into diseased hearts.

Gamache himself wonders about life when he begins to research the murder of L, a kindly homeless woman who was seemingly killed for a necklace. How does life go so far and people fall so hard? How can someone bring themselves to murder – especially a seemingly pointless killing? CC leaves behind a legacy of similar questions as the villagers wonder, each individually, how they could stand by and watch CC destroy her daughter during the Christmas service, how they could say nothing when the Hadley house began its second disastrous slide into infamy and heartbreak.  And so, the cozy is, like ice, sharp edged and cutting. It glitters and takes the breath away with the raw beauty of nature but rawness is more of Penny’s focus here than a feel-good atmosphere. The frigid reality, the thinly veiled depression and hopelessness, sifts through leaving readers enmeshed in the atmosphere, but uncomfortably so. We want out many times, if for no better reason than to thaw saddened hearts.

Still in the process of building Three Pines, A Fatal Grace meanders, with the pivotal murder itself taking place farther into the book than expected. The clues stack up, but the sheer inertia of the investigation and the paltry nature of the findings is driving the characters stir crazy. Gamache is torn into multiple directions, attempting to keep his job at the same time he is lulled into the other seemingly less important investigation. Agent Nichol has returned with a vengeance and a lengthy background, and the powers that be are watching Gamache and hoping for a fall. The growing cast of new village characters expands, as does the reach of CC, and soon the vibrant personalities are jostling for room, each snowflake unique but quickly piling into a mountain of seemingly equal significance.

Yet, despite the foibles, Louise Penny’s series remains one of the strongest and best cozy mysteries. Merging literature with hard investigation, Penny bridges genres and gives readers the best of all worlds. We have the description and technicolor atmosphere that makes cozies so appealing, the characterization focused on multifaceted complications that makes literature stand out, and the just-the-facts gumshoe sleuthing that cements all the pieces into a cohesive whole. The result is a startling climax that is just as layered as the village interactions and just as disturbingly, inelegantly, human. Along the way Penny evokes every kind of humanity from the gloriously sacrificial to the depravity of selfishness and conceit, sometimes all in the same character. It’s this attention to detail and clear-sighted ability to acknowledge the multiple layers in everyone and every situation that makes the Gamache novels so enduring and so transcendent. Even with the slowness of a developing series and the distraction of the milling host of new and old characters, A Fatal Grace contains the ember of what it is to be alive, what it is to doubt, what it is to lose, and (disturbingly) what it is to go too far – beyond the point of redemption.