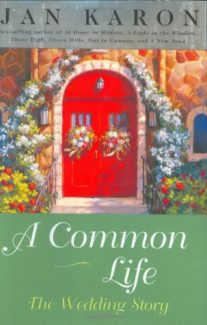 Back to the down home adventures of Father Tim, I took a detour from the proscribed reading pattern and after finishing A Light in the Window (the second book in the series) jumped immediately to book 6, A Common Life. As readers already know, A Light in the Window starts in a dismal season where Father Tim faces his own feared inability to love and accept romance in his life. The tale progresses frustratingly from a teetering mélange of teen-like disaster to its obvious by-products: Father Tim’s extreme emotional turmoil and Cynthia’s gradual slide into hopeless rejection when a sudden, and poorly set-up chapter long epiphany ends with a hurried proposal and the promise of a happily ever after that doesn’t seem right for the characters after everything that has come previously.

Compounding the strangeness, the next book in the series evidently takes off with post-wedded bliss a given, as though the trauma of the courtship, its near disaster, and a wedding perpetually on-the-edge of cancellation never occurred. Father Tim and Cynthia are happily together, as though they always have been, leaving readers to wonder: how did this change? We saw the painful point A and the happy aftermath of point C, but the middle portion that connects the two is unapologetically missing. Fans, of course, wanted answers and after years of demands, Karon capitulated in book 6, A Common Life, which goes back in time to review the period between proposal and marriage and how discomfort transformed into lifelong joy. 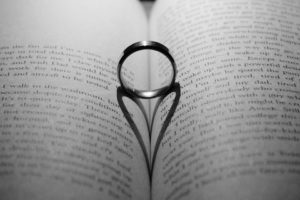 And so, it all begins, of course, where A Light in the Window left off as Cynthia and Father Tim plan out their marriage, announcing it to friends and family accordingly. Readers are ready to see Father Tim’s stress escalated to a whole new level, the doubts inherent in his choice and the double thinking that plagued him so giving him the final vicious tug before the dye is effectively cast. Instead, A Common Life presents a placid and bland, essentially emotionless progression. It’s not that Karon doesn’t try to showcase her characters in the depths of fulfilled happiness – it’s just not authentic somehow, not translating. Having come to the series through a much later, post-marriage book, I know that Karon has the expertise to depict the intricacies of life and love with another person, the quiet contentedness of home life and permanent affection. Yet the transition from not having such a blessing to finding and finalizing it just isn’t coming through on paper for her characters and A Common Life, while not bad, proved more filler than satisfaction.

The wedding and the events that lead up to it take precedence, meaning that the usual side stories are obscured, which only goes to make Cynthia and Father Tim’s nuptials feel that much more fake. Of course all the regular cast of characters are there and as lovable as ever, albeit less energetic. It’s as if they too feel that this installment is more cameo than story, something to appease an audience demanding that an author write a book and cover a story that she does not want to (or cannot) unravel. The effects are bland. We read it because we’re fans – because at this point Tim and Cynthia aren’t just people in a book and everything that has anything to do with them, however vague or unessential, is important to us. It’s like visiting your family: sometimes you visit and it’s magic and sometimes you just want to see them but inevitably don’t have much to say or do beyond “how’s the weather” and the mundanity of a slow directionless day. It’s fake and forced and not normally “you,” but in the end it’s part of the story and belongs, even if it’s certainly not the memorable portion.

A Common Life shouldn’t, by any means, be the first in the series that readers encounter and honestly, I see no rush to read out of order to follow the burning questions from book two. There isn’t an answer and the satisfaction of the wedding is more facsimile than Karon at her best. The rest of Father Tim’s story remains strong and so we shrug, wondering why Karon cannot unveil this one mystery, and yet we forgive and move on.