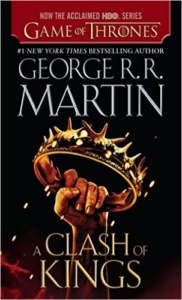 Backstabbing, Betrayals, and Political Intrigue: Everything You Need to Read This Election Season

Following the kingdom-wide upheavals at the end of A Game of Thrones, political machinations, declarations of war, and dreams of vengeance are enacted. In the wake of King Robert Baretheon’s death, several “true rulers” claim the throne and hints of incest continue to undermine the viability of Robert’s one (decidedly psychotic) son, the tentative King Joffrey. The battle erupts between Robert’s two brothers, the cold-hearted logician Stannis and the glory seeking younger brother, the ever popular Renly. Meanwhile, seeking to revenge the execution of Ned, Rob Stark leads an army against the powerful Lannister’s and in his departure, the cunning Greyjoys seek the ultimate war prize: Winterfell. The Lannister’s must fight to maintain leadership, with Tyrion discovering a new role for himself and engendering a plan to save his family’s crumbling empire.

Meanwhile, several long running side-stories continue. Dany wonders the desert with her dragons, eventually encountering the strangely mystical Qarth where her attempt to procure support encounters disbelief. Jon Snow continues into the wasteland where rumors of the dead rising and the return of the “others” continues to foreshadow later events. Arya hides her identity as Ned Stark’s daughter, and as a princess, falling in with several bands of warriors and mercenaries, encountering abuse and building a residue of hate and fortitude in her heart. Meanwhile Sansa – well, she’s just Sansa, stuck at the palace, the unwilling bride of Joffrey, and victim to her circumstances with little to no compunction to rise up against fate.

Both returning side characters (such as Ser Gregor Clegan) and new catalysts (such as Bran’s encounter with the Frog brothers and Areya’s strange pact with Jaqen the assassin) interweave riveting side plots into the large web of war and conniving which is placed against a medieval, patriarchal background. This means that the web of deceit and the unrest of the kingdom takes a more slow paced, world building rest in which a place with 8000+ years of history attains a lived-in quality. Comparing this with intensive characterization, the slow pace of A Clash of Kings gives readers more time to rest from the chaos, watch the dominos of fate get stacked against one another, and meld with the internal and external personalities of its denizens. Some characters and plots get more page space than others, and readers find their accelerated reading decreased as we get back into what I like to call the “daily stress” mood of the paranoid cast. The winds of war are coming and the preparations, lies, rumors, fears, and shaky battle plans converge to cover a multitude of slow plot points with a heavy sense of paranoia and general unease. We feel, as do the characters, that something big and although terrible is coming. Nothing will be the same.

Here also is an introduction to both Stannis and Renly, who take on bigger roles and significant positions as opposing kings from the same family. What’s surprising is that Renly, built up previously to seem if not a main character, then a main secondary sub character, gets little page space and less action while Stannis allegedly takes over, in company with the sorcerous red woman.

Meanwhile Dany (who evidentially would be the best leader

[with Rob a close second] also has a legitimate claim on the throne – just saying) wonders the desert with her dragons, in some sort of holding pattern. Martin doesn’t want us to forget her. We get the sense that she will eventually be a game changer, but for now this fascinating and likeable character is a back-burner story which adds little to the overall realm in trouble motif of Clash of Kings. Readers don’t mind, at least I didn’t, because Dany’s story, although rarely given, is always good and portrays a strong protagonist with an everyman/woman aura that is appealing. If, however, you’re expecting Dany to be important here, then think again.

Bran is also sidelined, dealing with strange visions and wolf dreams which his companies help him to sort through. As this goes on, the longstanding Greyjoy story clashes with the safety of Winterfell and Theon finally has the chance to make Daddy proud – if he doesn’t go off on his own and mess everything up. The Greyjoy story has long been an insistent thorn in my side and I do feel that Theon could be expunged from this story entirely. But, it seems that the Greyjoys in all their boring island warrior ways and snippy internal feuds are here to stay and at least in Clash of Kings the story starts to have relevance and legitimate impacts on other characters and the progression of the war. If the Greyjoys simply must remain, at least they are getting more interesting.

For those who have already encountered Brienne of Tarth in the television show, you’ll be happy to know that she first enters the books here, obviously building into another important character and adding to this already dense world.

The Lannisters undergo some interesting changes in this narrative as Cersei struggles with her unwieldy child king, mourns Jamie’s capture, and attempts to connive against her remaining brother, Tyrion, who has been named the King’s hand and intends to safeguard his newfound power. Proving to be ever the schemer, A Clash of Kings follows Tyrion through a high point as he uses wit and cunning to play a barbarous political game he finally admits to enjoying. Whether or not Tyrion will know when to stop playing is another matter.

And, of course, I could go on and on. As a matter of fact, Shmoop has bravely attempted to do a short summary of A Clash of Kings resulting in page after page of tightly packed text. As before, Martin’s world proves complex which makes it equally realistic, dynamic, and nearly impossible to qualify or summarize. The interwoven politics and occasional (rare) aspect of fantasy remain just as compelling and mixed as in the first book, with the interconnected-ness of political threads and half-told-truths becoming even more complicated (and believe me, I didn’t think that was possible). Readers are immersed not just in a story, but in a world and in the people, which is one of the reasons we’re okay with A Clash of Kings being a somewhat slow paced offering in this lengthy, seemingly endless series. What we enjoy is still there and Martin does deliver us blood hounds some decadent battle scenes of the beginning war toward the end with hints at even more wanton destruction and realm destabilization. I’m just hopeful that in the next novel, A Storm of Swords, my favorite character Dany will get some more game play as her dragons continue to grow and her smarts and ferocious spirt move her across impossible terrains. Go Dany, you brave and wonderful example of a hero!