Brew to a Kill, A 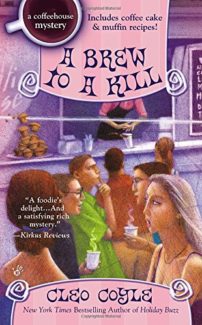 Back in the mood for coffee and killings, I dived into Coyle’s decadent A Brew to a Kill. Life is complicating for Clare. We last left her struggling with the reality of her relationship with Mike Quinn, terrified of the serious aspect of potential next steps (and another disappointing marriage.) Still battling with her internal fear, Clare’s cruising along all right despite it all, making lattes and thwarting the advances of her womanizing ex whose new marriage is a little too open for comfort.

Meanwhile, the coffee house is suffering from some local competition by a predatory cupcake maker with a gaudy food truck and some carnival selling techniques (not to mention a hokey French announcing system that will just get stuck in your head). When The Village Blend unveils its own traveling truck, complete with cappuccino on-the-go and healthy snacks, a vicious hit-and-run strikes Clare’s friend and business partner/baker in plain view. Has road rage infused this clever new gourmet meals on wheels idea? When the rubber hits the road, Clare is back and ready to investigate, even if it means dredging up gruesome images and working with a no-nonsense police detective. But, was the killer really targeting Clare’s partner, or Clare? Meanwhile, back at the blend a cash crop of exported coffee arrives with a little secret stowed away and Matteo begins to connect the dots between drugs and dangerous driving.

Combining the intensive revenge strategy of a desperate killer with an international flare following up on a drug cartel deal gone bad, A Brew to a Kill effectively combines two mysteries into a complicated and enticing blend. Exotic and yet relatable, the cozy mystery atmosphere stays strong while Coyle also manages to keep a steady investigation going, complete with all the gumshoeing you could ever want. Starting off in the killer’s prospective, we see the danger long before Clare is aware of it and from the moment of the hit-and-run, we know that what just happened is far more complex than it appears. This gets readers in the mood for some mystery with a delightful automotive twist that ups the stakes and the character’s paranoia (it’s New York City – there are literally cars everywhere.)

Personally, the food truck angle was my favorite aspect of the story, even though it wasn’t the more exotic of the two mysteries. Murder by marauding van was an interesting and plausible theme that is surprisingly complex and makes the who-dunnit element even harder to track down. Add in a new tough-as-nails police detective who is (thankfully) not overly stereotyped and NOT in love with Clare, stir in the aspect of personal involvement, and you have a story rich in flavor and wide ranging in ingredients. Plus, as a car fanatic, hearing auto details was plain cool and Coyle never overwhelmed readers with the more technical aspects. So, we learn something at the same time as we start to piece together the seemingly unrelated evidence.

Matteo’s globetrotting side mystery, which may or may not be related to the string of auto homicides, becomes pertinent towards the end, and takes the story on a strange side track that while well done makes us lose focus. Soon cartels and drug lords take over and the van vic takes a back seat to immediate danger. The two mysteries, as much as they look like they might connect, don’t actually succeed in supporting each other, and so one always takes precedence over the other, creating an uneven shift but also allowing for an unexpected twist and a real-world feeling of complications which overtake the initial focus.

Everything culminates into a situation that not only leads to the big reveal but also furthers the character development, specifically the somewhat shaky relationship between Clare and Quinn. The murder mystery (and the drug dealers) place Clare and Quinn at a crossroads. While we don’t get the “full answer” in A Brew to a Kill we get the set-up that will make or break their relationship and some pretty solid character development along the way. Even Mat, with his admittedly strange marriage, is growing in his actions and interactions with Clare and others – which gives readers an added level of worry on behalf of Detective Quinn.

Combining the stunning sense of big city cozy alongside gourmet meals, evenings out on the town, and high-rise windows open to the balmy summer air and twinkling lights of a friendly metropolis, A Brew to a Kill continues the strong Coffee House Series tradition, elegantly mixing mystery and mayhem into the finer things of life. We come away from the novel not with the sense of having read, but with the feeling of a satisfying visit with old friends, one we plan to make again and again.