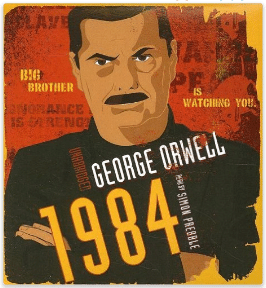 Big Brother Is Always Watching You

In a world where telescreens are always watching you and where a careless facial expression or the uttering of words in your sleep will get you arrested and tortured, disloyalty to the party, headed by Big Brother, will cost you more than your life and sanity. It will cost you selfhood.

A predictive classic, 1984 created a haunting vocabulary of words to describe a totalitarian society and a we-the-sheepople population content with cheap booze, rallying speeches, lottery tickets, and the latest songs. There is The Party, rulers of the massive conglomerate of Oceania, and then there are the proles (read, simple people). In between the powers that be and the unconscious masses are a few elect, a few with honed intelligence and flexible sanity, who support The Party’s revision of the past and ownership of the future. Winston Smith is one of these, a man who tirelessly works at the Ministry of Truth, making “corrections” in news articles and other assorted means of recorded history, ensuring that everyone knows that Oceania has always been at war with Eurasia (or Eastasia, as the fluid state of constant war decrees). Despite his responses to the morning exercise edicts of the telescreen, his participation in the daily Two Minutes of Hate, and avowal of love for Big Brother, Winston has a problem: his faulty memory insists on recalling events that never happened, that are contrary to The Party’s history. Oceania has not always been at war with Eurasia. He remembers persons who now do not exist – having been removed by The Ministry of Love for thoughtcrime against Big Brother and the principles of English Socialism (Ingsoc). Worse still, he craves something beyond The Party and his dedication to it. He craves a woman, an affair of the mind and body, dedicated to himself and dangerously outside all of The Party’s strict edicts. Ultimately, he wants to take Big Brother down, even if he’s not ready to admit this to himself.

A subversive, frequently banned, dystopian vision of the future, 1984 functions as a dire warning while entertaining as a tense, character-driven narrative. Thrown fully into this future where the Thought Police can literally read your mind, surveying you at all moments of the day through the two way telescreens that blare party propaganda and patriotic music, the claustrophobia sets in early. There is nowhere public or private where Big Brother isn’t watching. Children are trained in The Spies to sell out their parents, family units function merely for procreation, friendship equals treachery, and at every moment if the Thought Police aren’t watching, your friends and family are. A transmogrify of a fully operating fascist society, we first meet Winston, sandwiched in his dreary home in the only corner where the telescreen cannot see. And he’s writing. It’s one of many crimes, each building and blooming into one another, creating an elaborate daisy chain of human misery. The controlled life is not worth living.

A surprisingly short novel in length, 1984 is deep in scope. The prime focus in a moral: the methods by which societies are already controlled taken to their fruitions, sometimes comically presented in the extremes. It’s an interesting tale from the prospective of philosophy; it’s a horror story too as readers identify varying elements, such as doublethink, already in practice now (the creation of ultra-concise Newspeak for one, removing the human and the emotional in favor of the simple and the patriotic.) What’s surprising, or at least to me, was the reality of this mixed up world and our investment in Winston. This is a piece written to make a point, and while the ultimate subject is brutal and in your face, the crafting of a sympathetic, confused character takes it all home as we are put into Winston’s mind. It’s uncomfortable, downright terrifying and gruesome even in some ways, yet we cannot look away or even disbelieve the utmost absurdities (the classic example of two plus two equaling five for instance.) The pressure of the reality and the panic mixed with confusion we inhabit through the degenerating Winston gives this classic punch on a literary level. It’s just a good story, regardless of your politics.

I listened to the unabridged audiobook read by Simon Prebble. Usually, I just snatch whatever is on the library shelf and only look up the orator’s name when it’s time to review. Prebble broke me of this habit. His effortless creation of a grim world reflecting constant conflict engaged as did his subtle voice maneuvers. Each character has a unique manner of expression, a tone, a pitch, that peoples this world. The conclusion, the sudden shift in dynamics and the result of the inevitably unexpected is fully realized through the breakdown Prebble portrays. This is a narrative that readers will feel, and while you might pick it up to claim you’ve read a classic and are familiar with George Orwell, you’ll continue, breathlessly, because Big Brother is watching.