12 Rules for Life: An Antidote to Chaos 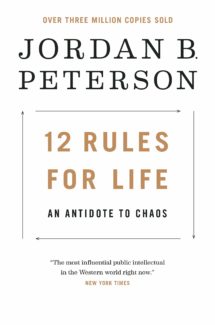 12 Rules for Life is part self-help and part philosophy. It’s a rambling, at times simple, at other times deep and complex, interconnected mesh of essays that advocate against the path of bitterness, which is equal parts filled with the detritus of self-loathing and the chaos of resentful arrogance. The rules, ostensibly small tidbits, are often just the tip of the iceberg under which Peterson’s real content, sometimes hard to tie into the rule, floats, amorphously powerful and at times mind-bendingly multifaceted. The rules, each a separate essay like chapter, are:

Peterson’s ultimate focus here, the backdrop of his chaos, as you will, is a lack of discipline: a world in which you choose what is easy, either through laziness or self-aggrandizement or just plain lack of knowledge. Perhaps you don’t think enough of yourself or you employ alleged humbleness as a metaphorical castration; if you secretly think yourself unworthy, others pick up on the vibe of weakness and this triggers the primal desire to destroy the weak. Jordan’s end explanation – stand up straight with your shoulders back, effectively translates: no one gives you shit if it’s obvious that you are self-respecting, won’t accept negative treatment, and are independent of the herd as averse to needy and desiring fulfillment through its approbation. It’s a simple enough concept, one that starts the book with the feeling of a self-help piece with the backing of evolutionary science (i.e. we learn a lot about lobsters as a backdrop to this genetic tendency to pull the weak back into the doomed cluster.) 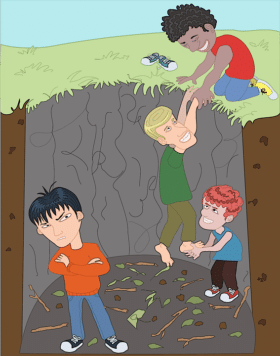 As the rules go on, however, the concepts drift further from the usual self-help practical advice, and instead take on a complex philosophy only loosely tied into the central, easy to remember rule. This really starts around rule five, once Peterson has passed the obvious and is now telling us the how and the why of the application and what it means in the grand scheme of not just your life, but the way of all society. By rule seven, the philosophy is cranking and our interest diverges from the practical application and the head nodding, “yes, yes, common sense really” to a deeper introspection that is at times just as powerful as it is difficult. Despite Peterson’s advice (rule 10) to speak precisely and, ultimately, without convolution, his text is not something you can gloss over. Indeed, you’ll be reading and re-reading to try and understand, and it’s not all because of the eloquence of diction. Sometimes his ultimate point, the one that goes beyond the obvious rule, is hard to truly fathom or easily quantify in any sort of summary. Sometimes Peterson is struggling to explain something grander than the mere earth we live in, something universal and basic yet still hidden, and sometimes he is just making a really complicated example. Admittedly, sometimes it’s also just a tangent too.The end result is a book that is intriguing and thoughtful, if not perfect. Sometimes Peterson gets a little too brainy for us to take seriously – for example, his winding chapter that points to the feminine as chaotic and the masculine as the reverse (something that is equal parts insulting and pseudo-sciency). Yet, even though not everything is clear, and even though the extrapolation of rules from a weighty this-is-the-human-state dialogue stretch the overall rule at times, the book is effective in its ultimate end goal: making us really and truly think and desire betterment. Some of Peterson’s points are just spot on. Things we know (or should know) pinpointed powerfully. For example, rule seven, peruse what is meaningful, not expedient. Well said, easily digested, but yet imminently wise and almost never truly put into practice. How many times are we more engaged with the daily pursuits than with the long-term goal; how many times do we choose the pleasures of now over the security of the future?

Ultimately, despite the book’s occasional unwieldy nature, and the diatribes down into the depths of evolutional hypothesis, Peterson’s argument excels and the reader’s overall experience is both edifying and enjoyable. Provocative, thoughtful, and applicable. 12 Rules for Life is worthy of a close read. You won’t agree with everything or even see everything in Peterson’s way, but you will think.