Fate of Greenland, The 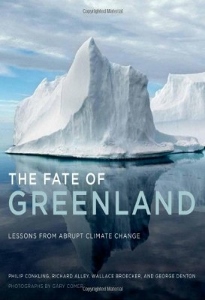 Climate change or global warming.   Whatever you call it, it’s a topic that generates a lot of heated debate across a wide spectrum, from well-heeled corporate lobbyists to long-haired Earth First! radicals.  Fortunately, there are some dedicated scientists who have spent much of their lives deciphering the climatologic mysteries that might allow us to effectively predict or even change the future of our planet.  Philip Conkling, founder of the Island Institute, has teamed up with three accomplished geoscientists – Richard Alley, Wallace Broecker and George Denton – to produce The Fate of Greenland, a picturesque exploration of Earth’s past, present and future.

The book had an unusual genesis when Gary Comer – Chicago native, sailor, Lands’ End founder and philanthropist – completed the first private voyage through the Northwest Passage in 2001 aboard his boat, Turmoil.   Realizing that his success was as much a result of retreating Arctic sea ice as it was seafaring acumen, Comer gathered some of the finest researchers together to form the Comer Fellows Program in Abrupt Climate Change Research and much of their work is presented in this volume.  Comer died in 2006, but most of the remarkable photographs that illustrate the book come from his archive. 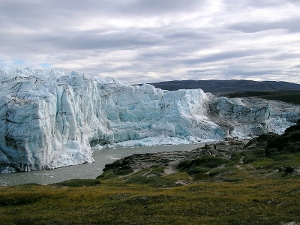 The edge of the western Greenland ice sheet, near Kangerlussuaq.

Earth’s climate has changed abruptly in the past, impacting humanity in significant ways.  The Medieval Warm Period from AD 950-1250 allowed for thriving Norse agricultural settlements along the southern coast of Greenland.   Unfortunately, these communities were unable to adapt to the onset of the Little Ice Age (1350-1850) and they subsequently vanished.  Glaciers in the northern hemisphere advanced considerably during this cold period, reaching their largest extent since the last full blown Ice Age about 10,000 years ago.  Much of the evidence for these climate changes lies hidden in Greenland, in the shrinking glaciers and in the moraines they leave behind.  Most of this book is focused on explaining the science behind these mysteries, including ice core interpretation, carbon dating, pollen analysis and oceanography.

Variations in solar activity, idiosyncrasies in Earth’s rotation and orbital path, subtle changes in geochemistry, fluctuations in worldwide oceanic currents and volcanic eruptions can all affect the planet’s climate.  Scientists are slowly assembling all of these pieces into an increasingly coherent picture of past climactic trends, allowing for more accurate predictions of the future.   Of course, humankind’s recent and rapid injection of large amounts of carbon dioxide into the atmosphere is the new variable and, while their predictions include a margin of error, there is clear consensus that it’s going to get warmer.  Maybe much warmer. 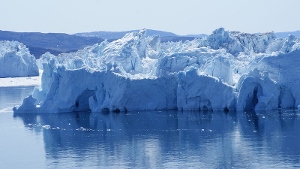 Unfortunately, I found much of the science writing to be overly dry and technical.   The book is loaded with information, but it doesn’t make for easy or enjoyable reading.  Although the concluding chapter that looks toward the future presents some ideas that I hadn’t considered before, allowing me to learn something even if I don’t completely understand the preceding chapters.

In the end, The Fate of Greenland suffers because its greatest strength is also its greatest weakness.  It presents a sober, balanced, evidence-based approach to the climate change debate that is too dry and technical.  The book is a good resource for anyone who wants to look at a lot of unadulterated evidence, but it’s not recommended for the casual reader.  Two and a half stars out of five for the writing, boosted to three stars overall due to the wonderful and abundant photographs.  They’re worth a look even if you’re not sure you want to read about the finer points of oxygen isotope analysis.