And in the end… 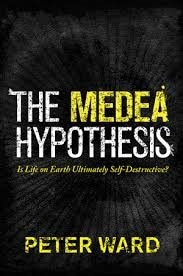 The question may not come up often in polite conversation, but it’s worth pondering during quiet moments.  Will the world end with a bang or a whimper?  Over the millennia, many end time scenarios have been envisioned, from religious Armageddon to nuclear annihilation.  Or maybe a sudden devastating collision with an asteroid or an enlarging, Earth-scorching Sun in its death throes comes to mind.  While I sincerely hope that no one reading this will be witness to any version of the end times, the final days of life on Earth may turn out to be much more inconspicuous and subtle than any of these apocalyptic theories.  In The Medea Hypothesis, paleontologist Peter Ward reveals his own theory about the end of the world and it’s just about as depressing as you might imagine.

But first, Ward sets up the point-counterpoint debate that is the basis for the book by discussing the finer points of The Gaia Hypothesis, first popularized by James Lovelock in the 1970s.  This theory states that life tends to interact with its inorganic surroundings in ways that stabilize and regulate the biosphere, maintaining favorable conditions for the persistence of life in the process.  Named after the Greek goddess of Earth, the theory has had a wide-ranging impact on the field of biology over the decades, from ecologic science to the environmental conservation movement.

Unfortunately, according to Ward, this just-so story has little basis in reality when one looks at the paleontological record left behind by life on Earth over the past 3.6 billion years.  Named after the mythological Greek princess Medea – who killed her children in a fit of jealous rage against her unfaithful husband Jason – Ward’s theory states that life inevitably tends to create conditions that lead to the destruction of future life.

Discussing numerous previous extinction events, Ward presents evidence that life has repeatedly come within a hair’s breadth of being completely wiped out by the interplay of evolution and geochemistry.  From overwhelmingly toxic atmospheres of methane, oxygen or hydrogen sulfide to the complete freezing of Earth’s oceans, life has barely scraped by on numerous occasions, luckily surviving mass extinctions of more than 90% of all species. 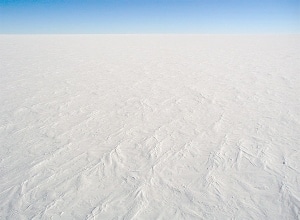 The view from snowball earth…

But Ward is interested in more than just old extinction stories; he strives to figure out if we’re on the verge of the next big event.  And if so, when will life as we know it end?  And how will it play out?  It’s all pretty somber stuff, but in the end it serves a noble purpose by busting some myths and providing a more accurate view of the history of the natural world we live in.  He even suggests some important ways humanity might avoid the next ecological disaster, from sophisticated geoengineering to colonies on Mars.

Regrettably, while the topic is scientifically fascinating, I found the book difficult to read.  Even though he’s writing for a general audience, Ward’s prose is often too dense and his arguments tend to be poorly organized and sloppily edited.  Although he successfully argues in support of his Medean theory – slaying the naïve Gaia handily – I found his book to be a struggle, even when I wasn’t becoming increasingly depressed about the end of the world.

In the end, The Medea Hypothesis is a cold dose of reality that reveals the darker, biocidal side of Mother Nature.  While the topic is bound to be sobering, I might have enjoyed the read if it weren’t for the awkward storytelling.  Unfortunately, even though I’d like some company for my misery, I can’t recommend it.  Anyway, life goes on.  Or maybe not.