The Empire That Wasn’t… 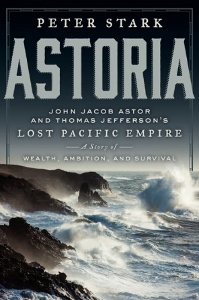 Nowadays, Astoria is just a small city of 10,000 people in northwestern Oregon, most famous as the southern terminus of the Astoria-Meglar Bridge, a four mile span that crosses the massive Columbia River into Washington.  But despite its current diminutive status, the city has a rich history as the first American settlement on the Pacific Ocean.  Filled with heroes, wretches and occasional scorbutic insanity, Peter Stark’s Astoria is a rarely told historical saga of remarkable adversity that makes for some thrilling reading.

Following the completion of the Lewis and Clark expedition in 1806 – which revealed so much about the vast economic potential of the immense North American continent – John Jacob Astor, a German immigrant who had already made a fortune in the fur trade, had a vision that was as simple as it was brilliant.  The fur industry to the east of the Rocky Mountains had already been fully carved up by the Hudson’s Bay Company and North West Company, but Astor figured that there were plenty of beaver for the taking further west and he knew that the sea otter trade on the Pacific coast had already shown enormous profits for Russian and American entrepreneurs.   Envisioning a vast global empire, Astor figured that he could trade cheap beads and manufactured goods for beaver and otter pelts with the natives on the west coast, ship the furs to China – where demand was booming – and trade for silks and other finery which would fetch enormous sums back in Europe.  The potential profits where truly astounding, proving irresistible for the shrewd and competitive Mr. Astor.

All he needed was a home base on the Pacific coast and some men to do all the hard work.

So in 1810, he bought a ship, hired a brave captain and some stubborn Scottish fur traders and instructed them to sail around Cape Horn and establish a fort at the mouth of the Columbia River.   He also hired a 27 year-old New Jersey businessman with no wilderness experience to lead a team of Americans, Scotsmen and French voyageurs across the continent to meet up with the seagoing party on the coast.  It sounds rather straight-forward on paper, but the elements, the natives, human greed and international conflicts would wreak havoc on this incredibly optimistic plan. 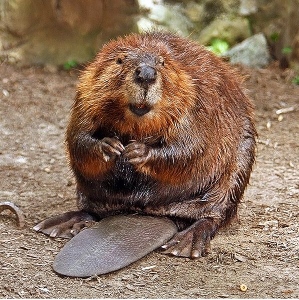 Based on numerous first-hand accounts, Stark has pieced together a thoroughly enjoyable story – somehow managing to keep it organized, despite the large cast of characters.  From the bitter squabbles that animated the seagoing adventure to the incredible challenges faced by the overland party – which pioneered much of what would eventually become the Oregon Trail – he captures much of the drama in these historically significant events.  He also feels free to point out where naïveté, ignorance, paranoia and hubris get the best of our heroes, adding a bit of comic relief at times.

The only thing I wanted Stark to tell me more about was the fate of the beavers and otters.  Faced with relentless hunting, populations were decimated in many locations so that investors like Astor – the first American multi-millionaire – could make fortunes.  Some information about the ecological impact of these endeavors would have been welcome.

While Astor’s ill-fated Pacific empire never really got off the ground, his determined vision fueled much of what was to become America’s “manifest destiny”.  Astoria captures this ambitious spirit and all of the life-and-death hardship that went with it.  An entertaining read that I can enthusiastically recommend for all American history buffs.