Murder of the Century, The

In 1897, two boys find a tightly wrapped package floating in the East River.  Much to their surprise, it’s the upper half of a well-muscled man’s body.  Arms still attached, head missing.  Blueberry pickers in Harlem stumble across the lower half of the same unfortunate victim.  Still no head.  Police are notified and eventually suspect foul play, having initially blamed the findings on the work of local medical students.  So begins journalist Paul Collins’ latest work, The 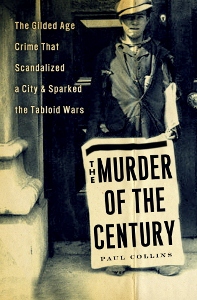 Murder of the Century, a true tale of greed, deceit and mayhem in New York City.

There have been many “murders of the century” over the years, but the one that is probably most memorable to many readers is the murder of Nicole Brown and subsequent trial of OJ Simpson in 1995.  The associated media circus spawned the voracious 24 hour news industry that is with us to this day.  Even as a relatively disinterested bystander 2000 miles away, it was hard to avoid being caught up in the tragic saga.  Until I read this book, I never would have believed that there had ever been anything like it.  This book persuasively suggests otherwise.

While most of the story reads like a thriller mystery with duplicitous suspects and flamboyant lawyers, it’s also the birth story of “yellow” or tabloid journalism.  William Randolph Hearst had recently acquired The New York Journal and was determined to dominate the local industry, enthusiastically striving to take down Joseph Pulitzer’s New York World in the process.  This sensational murder served as ideal fodder for these two titans, who found new ways to offend and scandalize with each daily printing.  Not surprisingly, they sold a lot of papers.

Collins also reveals the sorry state of criminal forensics at the time.  How do you solve a murder when you don’t have the victim’s head?  The New York City detectives were helpless and without the assistance of countless reporters and citizens they never would have gotten anywhere.  Finger printing was a recent innovation and was generally regarded

with skepticism.  Even the concept of safeguarding the crime scene was foreign.  Collins’ description of dozens of helpful children scouring the fields surrounding the site of the murder – looking for the head – is truly comical.

These three entertaining threads:  a gruesome murder, no holds barred journalism and criminology in its infancy are tied together in a thoroughly enjoyable period piece.  Collins skillfully combines well researched history with plenty of humor and irony to tell a memorable 250 page story.  I was frustrated whenever I had to put it down.

Forgotten in the sinkhole of time, The Murder of the Century is a well written and engaging revival of a story that shocked New York City and the nation.  It also reveals the history behind modern day headlines like “FBI Captures Bat Child” and “Strange Breed of Cat Found on Saturn’s Moon”.  Strongly recommended for both mystery and history buffs.