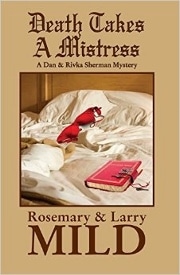 When I was younger I thought working in a book store would be a dream job. Then I realized it would be just like any other job and probably make me hate the things I loved – books. The protagonists in Rosemary and Larry Mild’s Dan and Rivka Sherman Mystery series do not share my apprehension. In Death Takes a Mistress, Dan and Rivka have owned their store – The Olde Victorian Bookstore in Annapolis – for about a year and show no signs of wavering.

Death Takes a Mistress is the second book in the series (preceded by Death Goes Postal) featuring the middle aged couple. In this installment they hire a new clerk named Ivy Cohen who has just recently arrived in Annapolis from England in search of her birth father, who is the man she believes responsible for the murder of her mother when she was a baby. The case is cold with all signs pointing to Annapolis as the destination the murderer chose after committing the crime. Ivy means to seek justice for her mother, no matter the danger she may bring upon herself (or her new employers).

As in most cozy mysteries, there is a lot of material in Death Takes a Mistress that has nothing to do with the mystery at hand. We are exposed to many, many members of the Sherman’s Jewish community, Ivy’s elderly landlady, much information about the running of the bookstore as well as the local mystery writers group that meets there, and quite a bit of flashback to the life of Ivy’s mother. And of course there’s lots and lots of filler about Dan and Rivka and their relationship to drive the series forward.

Like I said – not too unusual for a cozy to spend a lot of time outside the mystery. In this case, unfortunately, the cozy conventions become major distractions. There are allusions to the plot of the first series installment that apparently left Rivka traumatized and give too much information for someone looking to read that book but not enough for any of it to make complete sense. The characters introduced in the Jewish community overlap with the suspect pool and frankly there are simply too many and their relationships are poorly laid out. I needed to go back more than a few times to figure out who was the wife of whom and whose child they were talking about and eventually I just didn’t care. The mystery writers group posed a whole different set of issues as various characters read chapters of their latest stories, further confusing the already muddled proceedings.

If I picked every nit I stumbled across in Death Takes a Mistress, this review would be longer than the book. Boiled down to the basics, there is too much going on and none of it is particularly interesting or well put together. The writing is stilted and the dialogue feels unnatural, the characters don’t feel real and aren’t particularly likeable (the habit of allowing the reader into their catty and judgmental thoughts does not serve the characters well at all, particularly Rivka) and the basic mystery is tepid and uninspired. The whole book feels forced and unfocused.

I don’t recommend Death Takes a Mistress when there are so many other, better cozy mystery series out there.   To find one that we like, check out our Cozy Mystery Favorites – any of which would be more satisfying.

My thanks to Maryglenn McCombs for sending me a review copy of Death Takes a Mistress.