Owl Who Liked Sitting on Caesar, The 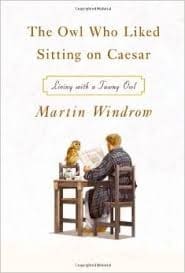 For millennia, humans have been found owls intriguing.  Whether as symbols of impending doom or serene wisdom – or as an ally of literature’s most famous teen wizard – these nocturnal predators have captured human attention in a unique way.  Years before Hedwig became a household avian name, British military historian Martin Windrow had a fascination for birds of prey and became quite obsessed with the idea of having a pet owl, even though his seventh-floor London flat didn’t really represent the best environment for such an escapade.  Now, many years later, he tells of his life with a tawny owl named Mumble in The Owl Who Liked Sitting on Caesar.  Told with wit and an impressive tolerance for bird shit, his story is sure to entertain nature lovers of any feather.

In the late 1970s there were no Dummies Guides for owl rearing, but Windrow was able to learn two things before he got started.  First, it’s best to start raising your pet owl immediately after hatching so she imprints easily on to humans.  And second, frozen one day-old chicken carcasses are cheap and make great owl food.  With those two bits of information and a strategy to smuggle his young tawny owl into his apartment without the landlord’s knowledge, the author was set to go. 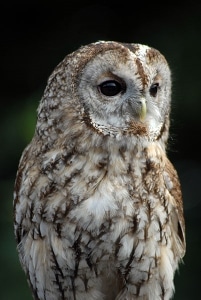 With a screened enclosure on the balcony, an indoor cage and frequent permission to freely roam the apartment – liberally covered with plastic and newspapers – Mumble took to her new home with enthusiasm.  Windrow’s humorous descriptions of her burrowing into the closets, flying into a rage when a pigeon would happen by and perching on a bust of the great Roman general Germanicus are interspersed with the story of a deeply moving 15 year owl-human friendship.  I wasn’t really expecting to feel so emotionally affected by the book, but the author captures the ups and downs of this unique relationship with surprising effectiveness.

In addition, Windrow includes plenty of owl science, from hunting and mating behavior to feather and optical physiology.  The unmatched night vision, amazing neck and myriad feather illusions are all explained with great clarity.  Owl’s even have a “trick” thumb that allows them to both perch and kill with equal effectiveness.  As a person who’s spent a lot of time with domestic cats it was fun to find the many similarities between these two pinnacles of rodenticidal ruthlessness.  While an owl is much more than “a cat with wings”, the comparison is an intriguing one.

Much more than a story about living with a bird, The Owl Who Liked Sitting on Caesar is a well told memoir of one man’s connection with a very special animal.  A deftly balanced chronicle with plenty of solid science and eccentric adventures, I can recommend it to anyone with an interest in owls or human-animal relationships in general.

Other book reviews about birds and other strange pets: